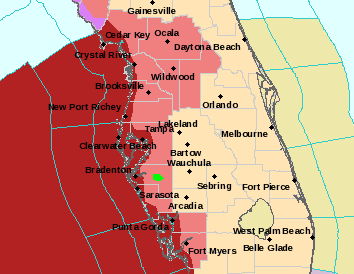 Pinellas County schools and district offices will be closed through Wednesday.

As Tropical Storm Elsa approaches the west coast of Florida, it is expected to threaten the Tampa Bay area Tuesday into Wednesday.

The National Weather Service has placed the Tampa Bay area under a tropical storm warning and storm surge warning, meaning there is a possibility of life-threatening flooding from rising water moving inland from the coastline. Residents at risk for storm surge are asked to move or elevate important documents and valuables to a secure area above the potential flood level.

The most severe parts of the storm as it passes the Tampa Bay area will be to the east of the storm’s center, putting the area at risk of some of the more damaging effects.

The NWS also issued a flood watch for coastal and inland areas of counties along the Gulf Coast, including Hillsborough, Pinellas, Manatee, Sarasota, Charlotte and Lee.

The NWS reports the storm’s maximum wind speeds as of 5 p.m. Monday were 50 mph, with some gusts higher.

Both the Pinellas County Commission and the Hillsborough County Commission declared a state of emergency on Sunday, which will remain in effect for seven days. That declaration allows county administrators to quickly approve expenditures and issue special orders to ensure public safety if necessary.

Pinellas and Hillsborough County schools and district offices will be closed through Wednesday.

Pinellas and Hillsborough counties are also distributing sandbags to residents in need at the following locations:

Pinellas County locations will be open from 1 p.m. to 5 p.m., or until supplies run out. Hillsborough County centers will operate from 8 a.m. until 8 p.m.

The Pinellas County Information Center remains open until 10 p.m. and can be reached at 727-464-4333 for more information.

This story will be updated as more information becomes available.

nextTropical Storm Elsa, back over water, takes aim at Florida