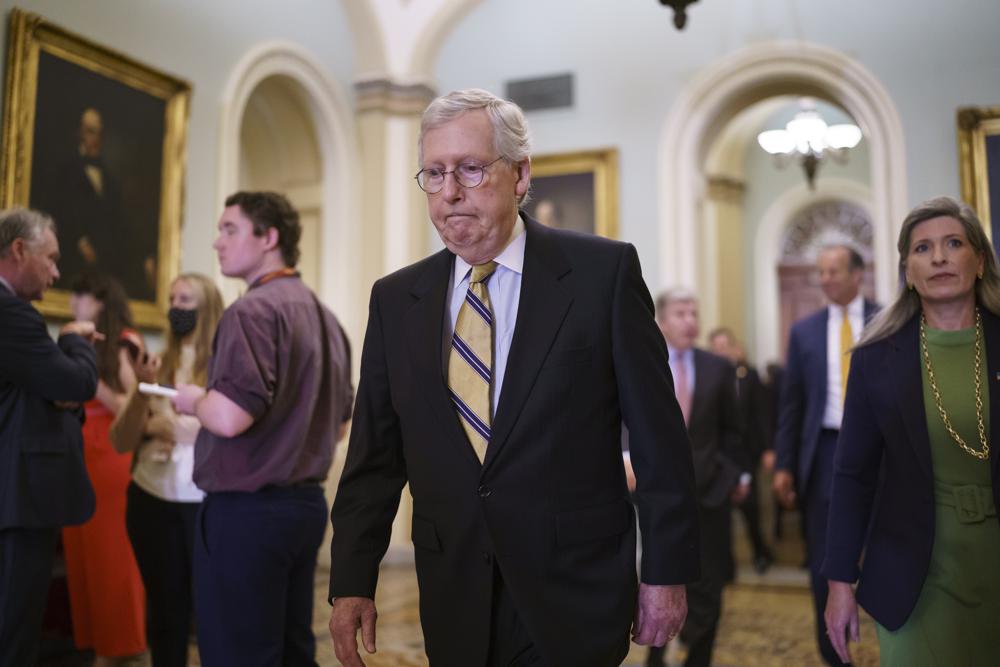 The bipartisan infrastructure deal senators brokered with President Joe Biden is hanging precariously ahead of a crucial Wednesday test vote as they struggle over how to pay for nearly $1 trillion in public works spending.

Tensions were rising as Republicans prepared to mount a filibuster over what they see as a rushed and misguided process. With Biden preparing to hit the road to rally support for his big infrastructure ideas — including some $3.5 trillion in a follow-up bill — restless Democrats say it’s time to at least start debate on this first phase of his proposals.

“It is not a fish or cut bait moment,” Senate Majority Leader Chuck Schumer, a New York Democrat, said Tuesday, describing the procedural vote as just a first step to ”get the ball rolling” as bipartisan talks progress.

Six months after Biden took office, his signature “Build Back Better” campaign promise is at a key moment that will test the presidency and his hopes for a new era of bipartisan cooperation in Washington.

White House aides and the bipartisan group of senators have huddled privately since Sunday trying to wrap up the deal, which would be a first phase of an eventual $4 trillion-plus package of domestic outlays — not just for roads and bridges, but foundations of everyday life including child care, family tax breaks, education and an expansion of Medicare for seniors.

Biden calls it a “blue-collar blueprint for building an American economy back.” He asserted Tuesday that Americans are overwhelmingly in support of his plan and “that’s the part that a lot of our friends on the other team kind of miss.”

The other team begs to differ.

Senate Republican leader Mitch McConnell and some outside groups decry what they call Biden’s “spending spree,” and McConnell has said big spending is “the last thing American families need.”

A core group of Republicans are interested in pursuing a more modest package of traditional highway and public works projects, about $600 billion in new funds, and say they just need more time to negotiate with their Democratic colleagues and the White House.

Senators from the bipartisan group emerged upbeat Tuesday from another late-night negotiating session with Biden aides at the Capitol, saying a deal was within reach and even a failed vote Wednesday would not be the end of the road.

Republican Sen. Bill Cassidy of Louisiana said the test vote Wednesday could be useful in helping to “advance and expedite” the process.

“We are so close,” said Democratic Sen. Jon Tester of Montana.

Biden has been in touch with both Democrats and Republicans for several days, and his outreach will continue “until he has both pieces of legislation on his desk to sign them into law,” White House Press Secretary Jen Psaki said Tuesday.

While Biden proposes paying for his proposals with a tax hike on corporations and wealthy Americans who earn more than $400,000 a year, the bipartisan group has been working almost around the clock to figure out a compromise way to pay for its package, having dashed ideas for boosting the gas tax drivers pay at the pump or strengthening the Internal Revenue Service to go after tax scofflaws.

Instead, senators in the bipartisan group were considering rolling back a Trump-era rule on pharmaceutical rebates that could bring in some $170 billion to be used for infrastructure. They were also still haggling over public transit funds.

Ten Republicans would be needed in the evenly split Senate to join all 50 Democrats in reaching the 60-vote threshold required to advance the bill past a filibuster to formal consideration.

Republicans are reluctant to open debate as the bipartisan bill remains a work in progress.

At a private lunch meeting Tuesday, McConnell and others urged Republican senators to vote no, according to a person granted anonymity to discuss the session.

“We’re not going to vote to proceed to a bill that doesn’t exist yet,” Sen. Roy Blunt of Missouri said afterward.

Some senators want to delay the vote to Monday. “We’re making progress, but we need more time,” said Sen. Susan Collins, a Maine Republican, one of the members of the bipartisan group.

By setting the vote now, Schumer is trying to nudge negotiations along, a strategy both parties have used before. If it fails Wednesday he can set another vote to proceed to the bill later.

Many Republicans are wary of moving ahead with the first, relatively slim package, fearing it will pave the way for the broader $3.5 trillion effort Democrats are preparing to pass on their own under special budget rules that only require 51 votes. Vice President Kamala Harris can break a tie.

Meanwhile, House Speaker Nancy Pelosi has been working to keep restless Democrats in her chamber in line, as rank-and-file lawmakers grow impatient with the sluggish Senate pace.

Liberal Democrats, in particular, are eager to make gains on Biden’s priorities — with or without Republicans.

“Time’s a-wasting, I want to get this work done,” Rep. Pramila Jayapal, a Washington Democrat, the chairwoman of the Congressional Progressive Caucus, told reporters Tuesday.

Rep. Peter DeFazio, a Oregon, the chairman of the House Transportation and Infrastructure Committee, dismissed the Senate’s bipartisan effort as inadequate. He wants more robust spending on the transportation elements and said, “We want an opportunity to actually negotiate.”

Democrat John Yarmuth of Kentucky, the chairman of the House Budget Committee, said if the bipartisan effort fails in the Senate, Democrats will simply include some of the infrastructure spending in the broader package they are compiling with Biden’s other priorities.

Democrats hope to show progress on that bill before lawmakers leave Washington for their recess in August.

The legislative maneuvering marks a major test of Biden’s ability to deliver on a massive package of economic promises and reforms he made during his campaign.

Biden is making the case that America needs to make up for lost time with fresh federal outlays to shore up its aging infrastructure and households struggling to recoup from a shifting economy and the COVID-19 pandemic.

The economy has come back to life as more Americans have gotten vaccinated and Biden’s earlier $1.9 trillion relief package has coursed through the country. Employers have added an average of nearly 543,000 jobs a month since January, with Federal Reserve officials anticipating overall economic growth of roughly 7% this year that would be the highest since 1984. Yet there is also uncertainty as employers say they’re struggling to find workers at the current pay levels and inflation concerns have yet to abate.

nextSunburn — The morning read of what’s hot in Florida politics — 7.21.21