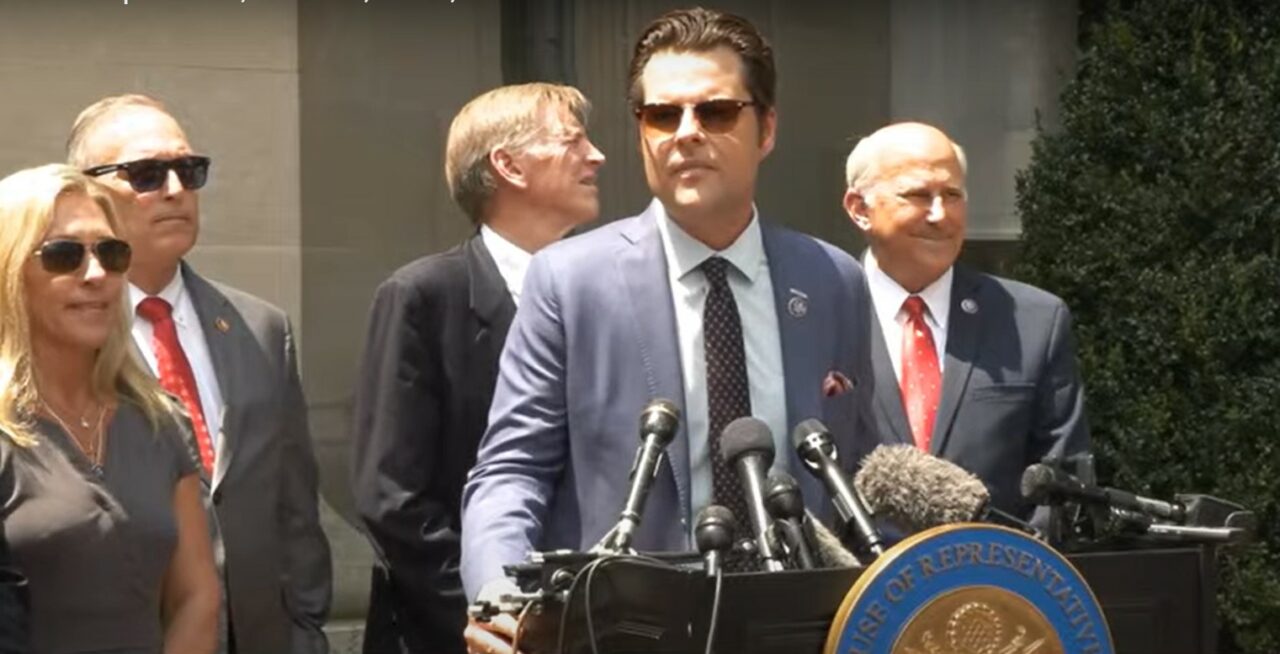 A House committee was more concerned about why the riot happened at all.

As a House select committee studied origins of the Jan. 6 insurrection, Rep. Matt Gaetz questioned treatment of the rioters.

Gaetz participated in a press conference outside the Justice Department with GOP Reps. Andy Biggs of Arizona, Louie Gohmert of Texas, Paul Gosar of Arizona and Marjorie Taylor Greene of Georgia. The controversial group, who all voted against certifying President Joe Biden’s election victory over Donald Trump, called the event to demand justice for the accused insurrectionists.

The event itself was disrupted by protesters who repeatedly blew whistles and leaned in on security.

“To the guy that’s blowing the whistle, we are not deterred,” Greene said, “so to anyone who is here being an activist and yelling today, here’s the statement that I need everyone to understand. We will not back down. We will not stop asking questions. We are looking for the truth. And we believe the truth can be found by reaching out and answering, and asking the right questions to the right people.”

Meanwhile in Congress, members of the Jan. 6 House Select Committee sought answers on what incited a riot that disrupted the certification of the presidential election. While the panel spoke with Capitol Police on duty that day, one officer derided those elected officials taking the side of Trump supporters who violently beat law enforcement and sought to overturn the election.

Capitol Police Sgt. Aquilino Gonell called out the members, though not by name, in his testimony Monday before the House Jan. 6 Select Committee. Gonell said he was confounded that people who swore an oath were not putting country ahead of party.

“You got people right now, in front of the Justice Department, asking some of the very same people to be released. Even though we are testifying about the trauma and the agony and everything that happened to us,” he offered. “It’s pathetic, and they shouldn’t be elected officials anymore.”

Gaetz’s participation in the press conference has been especially controversial as he’s under federal investigation right now for allegedly sex trafficking a minor.

“We are wondering why questions asked by colleagues over many months have gone unanswered,” Gaetz said. “Perhaps there are reasonable explanations as to why, but the attorney general hasn’t been forthcoming with information regarding these particular detainees.

“As folks representing all Americans, we think we have to get those answers.”

nextCDC reverses course on indoor masks in some parts of U.S.