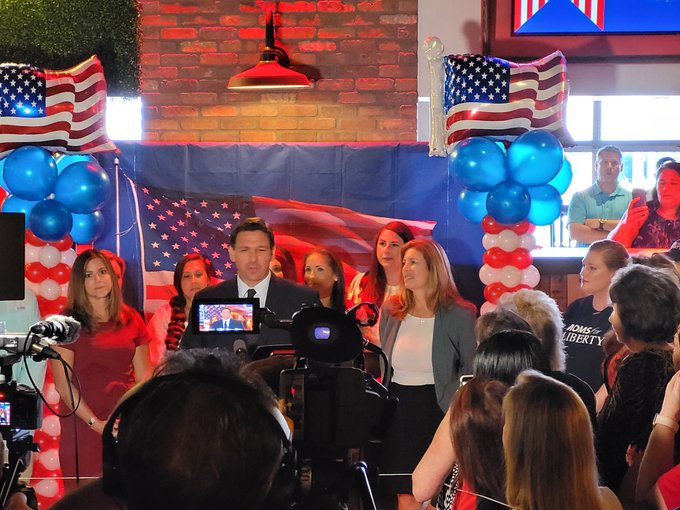 He says the Parents' Bill of Rights gives the authority to families to make their own choice.

That came hours after DeSantis held an event in Cape Coral announcing he would take executive action to preempt any attempt at forcibly masking students.

Standing at a lectern with the words “Free to Choose” emblazoned on the front, DeSantis told a crowd parents must decide whether their own children wear masks in class.

“It has harmed students,” DeSantis said of mandates. “Shouldn’t this be something parents decide?”

The order itself authorized Education Commissioner Richard Corcoran to “pursue all legal means available to ensure school districts adhere to Florida law, including but not limited to withholding state funds from noncompliant school board violating any rules or agency action” taken at the Governor’s direction. The order went into effect immediately.

Some where startled the order also made specific mention of funding. “If the State Board of Education determines that a district school board is unwilling or unable to comply with the law, the State Board shall have the authority to, among other things, withhold the transfer of state funds, discretionary grant funds, discretionary lottery funds, or any other funds specified as eligible for this purpose by the Legislature until the school district complies with the law or state board rule and declare the school district ineligible for completive grants,” the order reads.

And Sen. Gary Farmer, a Democrat who also represents part of Broward, promised to fight any attempt to stop the local school board from taking action.

“The Broward County School Board was and is right in their decision to mandate masks in our schools,” he said. “The science and evidence is crystal clear, the delta variant poses a significantly higher threat to younger people than previous iterations of the virus, and actions must be taken to ensure the protection of our children as they return to school. This is not an opinion, it is a fact clearly demonstrated by the more than 16,000 children have been hospitalized from COVID-19 this month alone. If this is not enough to pull on the heartstrings of Ron DeSantis, I question whether he even has a heart at all.”

The announcement comes as coronavirus infections surge in Florida faster than any other state, with the delta variant of the coronavirus giving new life to the pandemic. On Thursday, the Florida Chapter of the American Academy of Pediatrics issued an unambiguous argument for face coverings and distancing.

While DeSantis has hinted at a Special Session on the issue, he said he believes a Parents’ Bill of Rights signed into law in June ensures parents have the authority to make decisions about their own children’s medical and mental health. DeSantis said his executive order will clarify the law covers decisions about students wearing masks. He also argued many were hurt by a lack of face-to-face interactions in the classroom.

Sen. Ray Rodrigues, an Estero Republican, sponsored the Parents’ Bill of Rights legislation and believes it covers this situation.

“When it comes to mask mandates in our schools, parents need to be involved in the decision for their children,” he said. “I trust Florida parents to evaluate all of the information available and make the best decision about whether or not their children will be wearing a mask when they return to school next month. I’m grateful to Gov. DeSantis for his strong and steady leadership at every stage of the COVID-19 pandemic and appreciate his leadership on this issue, which is so important to many families across our state.”

“I fully support the Governor’s plan to take executive action that will ensure parents have the final decision about whether or not their children wear masks in school,” she said. “My colleagues and I have heard from constituents across the state who are concerned about the possibility that their children would be required to wear masks when they return to school next month. Parents have not only the right but the responsibility to be involved in these decisions. The Governor did the right thing by getting out in front of this issue before the start of the school year. He is alleviating any confusion and making it clear that parents will have the final say.”

That likely sets up a legal showdown between DeSantis and those districts.

There have been rumblings from the Governor’s Office that DeSantis could call a Special Session to deal with the issue of school mask mandates. Speculation grew when his schedule revealed he had conversations Thursday with Simpson and House Speaker Chris Sprowls.

However, the feeling at the news conference was that existing law allowed DeSantis to step in and block the districts from enforcing mandates.

Rodrigues said he does not believe a Special Session is necessary to address the issue and that the legislation and executive order should be enough.

Of note, the executive order does not preclude the Legislature “from exploring legislation to further protect the fundamental rights of students and parents to be free from excessive, harmful regulation in schools.”

DeSantis also heavily criticized the federal Centers for Disease Control for inconsistent direction on the matter of masks.

DeSantis acknowledged that most Florida school districts in the 2020-21 school year required masks for faculty and students. At the time, his top priority was ensuring in-classroom learning was available throughout the state.

He stressed the state had issued no such requirement, and some districts did not put one in place. He also cited a Brown University Study which he said proved there was no difference in COVID-19 transmission rates in schools requiring masks and those that did not.

“We’re here to say that in Florida, in the 2021 school year that the districts that did not require masks did not perform statistically different from those who did. The charter schools and private schools that didn’t require it also had similar outcomes.”

A parade of parents and teachers also spoke at the event, held at Two Meatballs in the Kitchen’s Cape Coral location. Teachers testified many students struggled with depression and isolation because of masks, and one parent said her honor roll student failed two classes for the first time as she dealt with lockdowns and policies tied to the pandemic.

“I knew it was not the right thing to be covering my face all day,” said Cyndy Ray, a teacher at a school in Southwest Florida, after describing when a student said months into the year a moment when she pulled off her mask was the first time he has seen her smile.