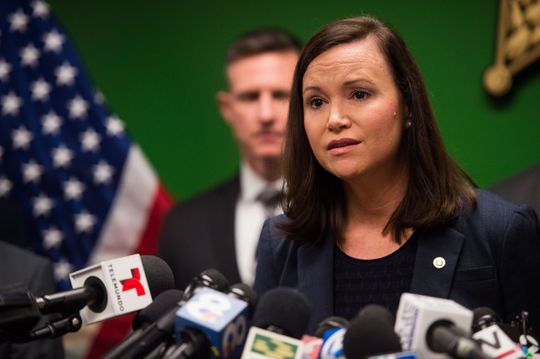 'Your plan is disastrous and counterproductive.'

Attorney General Ashley Moody is among a Republican coalition of 24 attorneys general vowing a legal fight against President Joe Biden‘s plan to impose a vaccine mandate on private citizens.

In a seven-page letter sent Thursday to Biden, the coalition warned they are prepared to litigate his plan, which may impact more than 80 million Americans.

Under the proposal, companies with more than 100 employees must require vaccinations or offer a once-a-week COVID-19 test as an alternative.

Meanwhile, health care workers at facilities and hospitals that accept Medicare and Medicaid will be required to get vaccinated without a test-out option.

The mandate, the letter asserts, is a “threat to individual liberty” and will further promote skepticism among unvaccinated individuals.

According to The New York Times, roughly 63% of Americans have had at least one dose of a COVID-19 vaccine, while 54% of Americans are fully inoculated.

“Your plan is disastrous and counterproductive,” the letter says. “From a policy perspective, this edict is unlikely to win hearts and minds — it will simply drive further skepticism.”

The Thursday letter marks Moody’s latest warning shot at the Democratic administration. Last week, she vowed to take “any and all action” against the federal plan and warned the mandate would aggravate police retention and recruitment, among other issues.

The letter, however, suggests the mandate will devastate Americans at large.

“Millions more will be directly and indirectly harmed,” the coalition wrote. “Millions of Americans are threatened with losing their jobs and the benefits that come with them, including life and health insurance and retirement benefits.”

The letter continues: “Your threat carries with it the threat of people losing their homes and shifting the financial obligation of supporting currently independent and employed individuals to public support systems.”

Ripple effects aside, the coalition lambasted the mandate as illegal.

Among other contentions, Moody and company assert COVID-19 is not under the purview of the Occupational Safety and Health Administration (OSHA).

OSHA, which is tasked with workplace safety, is also slated to implement Biden’s mandate

In the letter, the attorneys general argue OSHA indeed oversees “work-related hazards,” but not “all hazards one might encounter anywhere in the world.”

The alleged overreach, they warn, will set a dangerous precedent.

“If your expansive reading of the law succeeds, the American people can elect further abuses, as it is hard to imagine any requirement that the law would not allow,” the letter says. “You are clearly acting beyond the scope of the statute, and you will fail.”

The coalition’s warning comes a week after Biden unveiled the mandate at the White House. During the address, Biden lashed out against unvaccinated Americans. They, he charged, are causing “a lot of damage,” fueling the resurgent pandemic and must be addressed.