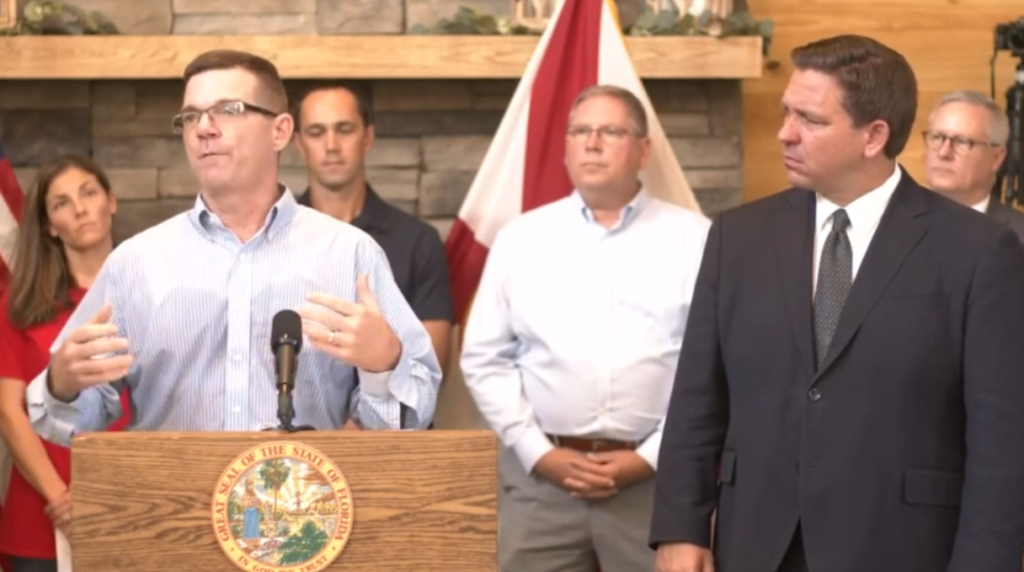 Stupidity in the defense of liberty is no virtue.

“Humankind,” said the poet, “cannot bear too much reality.”

Many Republicans seem especially resistant, preferring to dwell in a miasma of Deep State conspiracies and Internet nonsense inspiring them to believe that Hillary Clinton drinks babies’ blood, Donald Trump won the 2020 election, and that ingesting over-the-feed-store-counter tablets for deworming horses is a better way to protect themselves against a deadly pandemic than getting a thoroughly tested, highly effective, FDA-approved vaccine.

Gov. Ron DeSantis is Florida’s chief reality-denier. On Monday, he threw a tantrum disguised as a news conference in Gainesville, flanked by Attorney General Ashley Moody and CFO Jimmy Patronis. He ranted against the federal vaccine mandate, threatening to fine cities and counties requiring employees to get the COVID-19 jab $5,000 per infraction.

I mean, how dare the government try to save people’s lives?

Then, a couple of characters who were either disgruntled city employees or escapees from the local psych ward got to air their anti-vaccine foolishness. One woman implied that the vaccine might kill her and she didn’t want her children left motherless: “My body, my choice, my business,” she said. “I will not comply.”

Darris Friend, who said he’d worked for the city of Gainesville for 22 years, asserted, “The vaccine changes your RNA.”

Pro tips: The vaccine does not change your RNA. Nor will it kill you.

Want to know what will kill you? The delta variant. And the cruel cynicism of Florida’s Republican leadership.

The governor could have politely corrected these poor deluded souls. Instead, he looked at the floor and grimaced.

Moody, who’d clearly left her brain in her car, applauded.

But here’s the thing, y’all: Moody, Patronis, DeSantis, the governors of vaccine-recusant states like Texas, Mississippi, and Arizona, plus the entire Trump family, have all been vaccinated. They have not grown an extra head. They will not (sadly) be unable to reproduce.

Nevertheless, these Republicans are happy to gamble that they can keep the base braying and snarling and ready to fight the libs over their “free-dumbs” while not losing too many of their clueless-and-proud voters to the virus — which could turn out to be: 1) A fascinating illustration of Darwinism in action; and 2) An electoral problem for Republicans, whose old, white stalwarts are already dying off.

Florida’s COVID-19 rate is appallingly high. Hospitals are grossly over-stretched and ICU beds hard to come by. Undertakers are working double shifts to keep up.

DeSantis’s response to this epic heath care mess is to fight the school boards that have mandated that students wear masks; fight local elected officials who want their employees vaccinated; and fight the president of the United States, who’s told business owners to either get their workers vaccinated to test the hell out of them.

If DeSantis hears that you have mandated your teenaged children get the vaccine, he may come to your house and fight you, too.

Belligerence is his brand and ignorance is his friend.

He’s not stupid. He just thinks most of you are. As he squawks and hollers about Washington tyranny, he’s banking on nobody remembering that governments mandate vaccines all the time. In Florida, your child cannot go to school without a certificate of immunization verifying she or he had shots for diphtheria, pertussis, tetanus, hepatitis B, polio, measles, mumps, and rubella.

A 1905 U.S. Supreme Court ruling (Jacobson v. Massachusetts) supports government vaccine mandates: “The liberty secured by the Constitution of the United States does not import an absolute right in each person to be at all times, and in all circumstances, wholly freed from restraint,” especially to “protect the public health and safety.”

DeSantis probably knows this. He went to a pretty decent law school.

Republican voters are now so rabidly anti-knowledge, anti-fact, anti-logic, and anti-science, they’ll embrace anything, no matter how crazy, that goes against observable truth, especially when it comes to their own health.

If you get infected with COVID-19, why believe a bunch of epidemiologists and virologists when the My Pillow guy hawks oleandrin, a “miracle” cure derived from a highly poisonous shrub? Why listen to Anthony Fauci with his decades of experience and his Cornell M.D., or, for that matter, your family doctor? Just take hydroxychloroquine.

Ask DeSantis for some: The state has 980,000 doses of it lying around somewhere.

I miss the good old days when conservatives busied themselves denying evolution and the Big Bang Theory. Nobody died.

DeSantis has made denying what is plain to all rational beings part of his platform. Don’t believe your lying eyes and ears: Believe him and his merry band of bozos, including Trump’s Hoover Institute radiologist who recommended letting the virus infect a large segment of the population and the ivermectin-pushing psychiatrist who declared that masking is “child abuse.”

When reporters asked why he didn’t challenge the RNA guy’s absurd assertions, DeSantis pretended he hadn’t heard what the guy said and defended himself using his trademark tortured syntax: “Honestly, I don’t even remember him saying that, so it’s not anything I’ve said. ”

DeSantis added, feebly and belatedly: “I think the data is clear: you’re much less likely to be hospitalized or die if you’re vaccinated.”

But he won’t push for people to get vaccinated (except the rich old white people he prioritized last spring) — not when that might alienate the fruitcakes who show up at school board meetings wearing “Masks Are Slavery” and “Moms for Liberty” T-shirts, charging, among other things, that children “eat their masks,” that masks facilitate “sex-trafficking” (no, I don’t get it either), and that school board members are “communists.”

They’re his voters. This guy, the one in Gainesville who needs a refresher course in human genomics, represents DeSantis’s party: “It’s about our freedom and our liberty,” he said.

But stupidity in the defense of liberty is no virtue.

Via Diane Robers of the Florida Phoenix. Republished with permission.