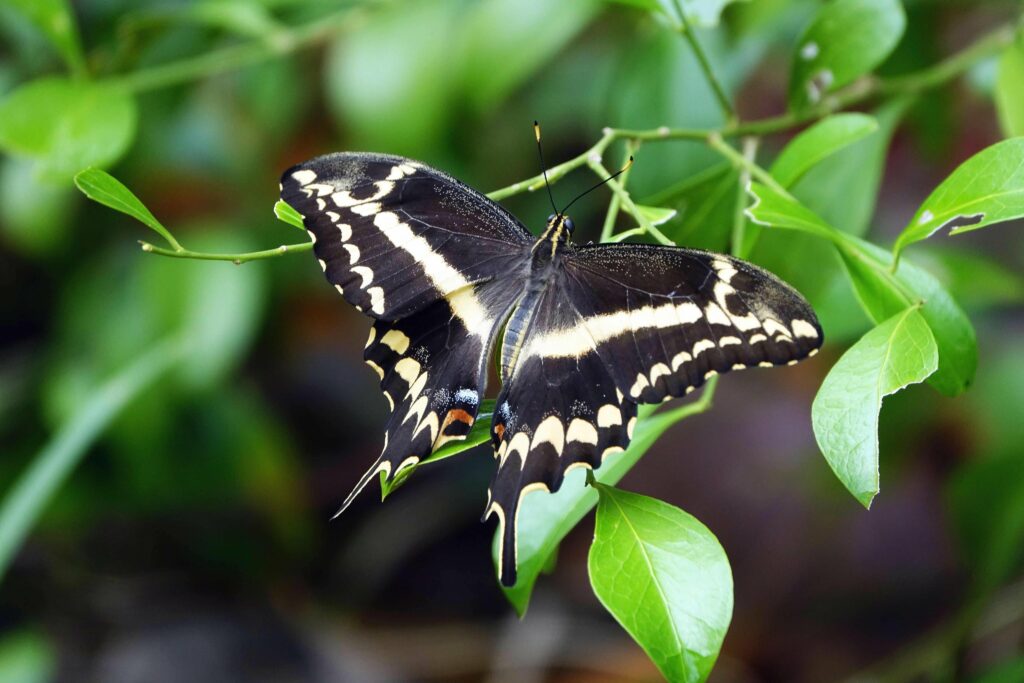 I’m sure the poor, sensitive developers will whine about this, too.

We could all use a little good news this week, so here’s the rare environmental story that will make you pump your fist and shout, “Yeah!”

Earlier this month, during a visit to Gainesville, I took my kids to see the huge butterfly rainforest at the Florida Museum of Natural History. They were impressed.

Everywhere we looked there were colorful moths and butterflies flittering, feeding, chasing after each other, perching in precarious positions. A few of them surprised us when they flew straight at our faces. This aggressive behavior naturally led to a discussion about the origins of Mothra.

In the same building where we were speculating about Japanese movie monsters is a laboratory — no, not for mad scientists creating huge and frightening bugs. The scientists in that lab have been very hard at work trying to bring an endangered butterfly back from the brink of extinction.

This isn’t just any old butterfly we’re talking about, either. This is one that the curator of the museum’s butterfly and moth collection, Jaret Daniels, has called “arguably the most charismatic butterfly in Florida.”

The Schaus’ swallowtail butterfly is a remarkable insect. Fully grown, it’s as big as a man’s hand. Its wings are a deep chocolate brown, striped in yellow with a dramatic dash of blue. And it has the rare ability to stop suddenly in midair, then fly backward to flee from birds and other predators.

In other words, it can maneuver as well as some Florida politicians.

Yet it couldn’t avoid the one-two punch of insecticide and habitat loss that landed the Schaus’ swallowtails on the endangered list in 1976. The Schaus and Bahamian swallowtails hold the dubious distinction of being the first butterfly species to be put on the federal list.

Then, in 2012, biologists searching the islands in Biscayne Bay found only four left — three male, one female. Those are very bad odds for future survival of a subspecies.

“It doesn’t look too hopeful,” one scientist told me back then.

So, imagine my surprise and delight last week when I got a press release from the museum headlined, “Florida volunteers see record numbers of endangered Schaus’ swallowtail butterfly.”

This spring and summer, while you and I were chilling in our air-conditioned homes and binge-watching Netflix, volunteers in mesh suits were diligently searching through the remaining wild places in the Keys for signs of the big butterfly. Many of the volunteers were retirees, devoting their time to something worthwhile to the community.

Despite the heat, the humidity, the swarming skeeters, the regular rains, and the difficult terrain, the press release reported, these diligent souls counted 1,700 Schaus’ swallowtails, “marking a more than 400-fold increase in the butterfly’s population size.”

“That’s the largest number we’ve seen since the mid-1990s,” Daniels told me this week. Seeing this turnaround in the past nine years has “been a real success story.”

Wait! Wait! Before you go organizing a victory parade and unfurling the “Mission Accomplished” banner, you should know what went into achieving this level of success. It was about as easy as battling Mothra armed only with a big fly swatter.

In 1911, these big-boy swallowtails first caught the attention of a physician named William Schaus who was visiting Miami to treat yellow fever victims. Seeing them, he was moved to write their first scientific description, naming them Papilio aristodemus ponceanus, which I’m sure you’ll agree just rolls right off the tongue.

Back then, they were easy to spot, and not just because of their 5-inch wingspan. They were found in hardwood hammocks from South Miami to Lower Matecumbe Key. Thousands of them scooted along on every breeze.

That was a good thing, because the swallowtails are pollinators, helping to keep the flora of Florida going on and on. Plants, you may recall, supply us with oxygen, so I am in favor of anything that helps them thrive.

Of course, shortly after Schaus published his description, the place where he saw them in Miami got paved over as the city grew. Fortunately, they were rediscovered in the Keys. Then came the 1935 Labor Day hurricane, and rumors spread that Schaus’ swallowtail had been wiped out — but, once again, reports of its demise were premature.

“By this time, the butterfly had become a glamour species in great demand by collectors,” notes a 1984 report published by the Florida Entomological Society. That raised fears that the crazed lepidopterists would snag far too many in their nets for them to continue existing in the wild. Fortunately, that fear proved unfounded.

The year that report was published, scientists found fewer than 70 adults still hanging on among the torchwood and wild lime in the North Key Largo area and Biscayne National Park. The search was led by a tenacious University of Florida scientist named Thomas Emmel — Daniels’ predecessor.

Emmel first persuaded federal and state officials to stop spraying powerful insecticides around public lands. Then, in 1992, Emmel got permission to scoop up 100 Schaus’ swallowtail eggs from the wild and move them to the lab in Gainesville. They did this just in time, because a few months later Hurricane Andrew blew through and knocked down the hammocks where they’d collected their specimens.

The future of the Schaus’ swallowtail now depended on captive breeding going on in Gainesville. This was by no means a sure solution to saving the swallowtails.

Captive breeding is generally an expensive, desperate, last-chance effort to save an endangered species from disappearing forever. Frequently, it doesn’t work.

I well remember the case of the Key Largo wood rat. The population dwindled so far that the feds authorized Disney’s Animal Kingdom to try to save them with captive breeding (insert joke here about Mickey Mouse helping his fellow rodents).

The Animal Kingdom folks bred lots and lots of rats, no problem. But when they were released into the wild with tiny tracking devices, owls and other predators picked them off pretty quickly until just one remained, still out there beep-beeping away. A biologist ventured out to find it — and came face to face with a Burmese python that had swallowed the last rat, tracking device and all.

Setting up the U.F. lab for breeding butterflies cost more than $50,000, most of it from the federal treasury. Surprisingly, the captive breeding went well and, by 1995, Emmel’s team had thousands of butterflies to release into the wild.

By 1997, there were 13 new wild colonies and the population had grown to around 1,400 butterflies. But success brought its own problems as the $12,000 a year for continuing the captive breeding and regular monitoring dried up.

Federal officials said there were other endangered species in dire straits so they needed to spend the money there. In 2008, they declared the Schaus’ swallowtail population “stable” even though it was anything but. That justified rerouting the money.

Emmel spent his own money and did some fundraising trying to keep the program going, but to no avail. He’d retired by the time in 2012 when the volunteers searching for swallowtails found only four.

The U.S. Fish and Wildlife Service, embarrassed, reversed course like a Schaus’ swallowtail about to be gulped down by a hungry iguana. The agency authorized an emergency resumption of the captive breeding program, this time under Daniels.

The price we pay for success

Daniels’ team did more than just breed more butterflies in the lab. They worked with other groups to plant more torchwood and wild lime, creating new habitat to replace what had been wiped out by developers. And when it came time to release the captive-reared insects, they turned some loose in those new areas as well as the places they were normally found.

One of those places with the new plantings was the Crocodile Lake National Wildlife Refuge in North Key Largo. I visited there in 2003, looking for Key Largo wood rats. I didn’t see any and wound up being all but eaten alive by bloodthirsty skeeters, despite coating myself in so much DEET that I smelled like a chemical plant.

While there I saw an abandoned Cold War missile silo and bunkers that had been built following the Cuban missile crisis. The refuge manager at the time told me about finding an elaborate (and illegal) cockfighting ring on the site. Somehow, it was directly adjacent to a police training range. Only in Florida!

By tearing all that down and hauling away the debris, the refuge staff “left a lot of wide-open spaces,” the current refuge manager, Jeremy Dixon, told me this week. “So, we took the opportunity to plant host plants for the Schaus’ swallowtail, and so far it’s working.”

When the volunteer butterfly trackers hiked the trails of the refuge searching for swallowtails, they found not just the results of Daniels’ captive breeding work but also wild caterpillars on the new plants, he said.

Daniels, who’s been working on saving the swallowtail off and on since 1993, credited all the hard work by partners such as the National Park Service in making the swallowtail’s comeback possible. I asked him how much this had all cost the taxpayers.

After we talked, I thought about that number. Then I thought about all the money being spent on saving other endangered species in Florida. It’s quite a list, ranging from the desperate experiment that rescued the Florida panther by bringing in female Texas cougars to breed with them to the elaborate measures taken to rescue the Florida grasshopper sparrow from flying into oblivion.

For each of these species — panthers, sparrows, butterflies, and all the rest — a major reason why they became endangered is they lost big chunks of their habitat to humans. In each case, the places they live were paved over and “replanted” with houses, stores, and other buildings, all of them sold by developers who collected their cash and moved on.

Meanwhile, we taxpayers get stuck footing the bill for fixing the ecosystem they broke. Cheap, it ain’t. One 2019 study estimated that the cost for saving just one endangered species topped $3 million.

Earlier this year, Florida developers went boo-hooing to the Legislature so they could limit the “impact fees” local governments charge to cover the cost of new roads, schools, and other facilities required by growth.

I say we should go the other way and charge them even more if they are going to wipe out crucial habitat for these endangered critters. If the cost for saving one endangered species is $3 million, then that’s the price a developer should pay for wiping out an acre of their habitat.

I’m sure the poor, sensitive developers will whine about this, too. But facing a big bill like that would make them more inclined to avoid that habitat, and we taxpayers won’t get stuck with the bill.

We really need to make this change, because the way we handle things now reminds me of the more aggressive moths and butterflies my kids and I encountered in the Gainesville rain forest: It just flies in the face of common sense.

Via Craig Pittman of Florida Phoenix. Republished with permission.

nextWinner and Loser of the Week in Florida politics — Week of 9.19.21