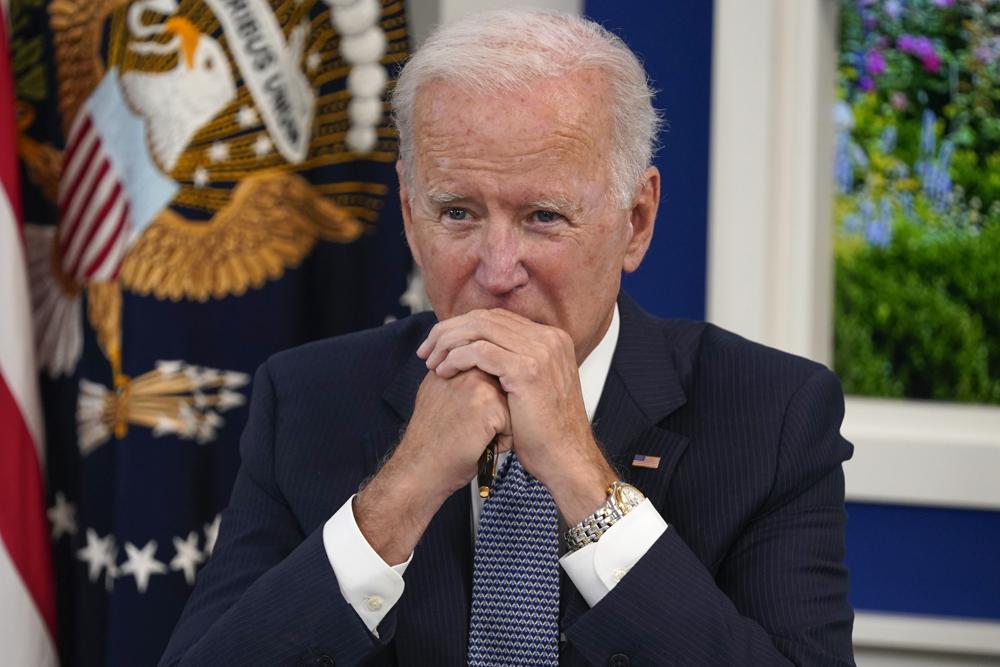 Biden has emerged as an unlikely advocate of browbeating tactics to drive vaccinations.

President Joe Biden is wielding his weapon of last resort in the nation’s fight against COVID-19, as he champions vaccination requirements across the country in an effort to force the roughly 67 million unvaccinated American adults to roll up their sleeves.

It’s a tactic he never wanted to employ — and had ruled out before he took office — but one that he feels he was forced into by a stubborn slice of the public that has refused to get the lifesaving shots and jeopardized the lives of others and the nation’s economic recovery.

In coming weeks, more than 100 million Americans will be subject to vaccine requirements ordered by Biden — and his administration is encouraging employers to take additional steps voluntarily that would push vaccines on people or subject them to onerous testing requirements.

Forcing people to do something they don’t want to do is rarely a winning political strategy. But with the majority of the country already vaccinated and with industry on his side, Biden has emerged as an unlikely advocate of browbeating tactics to drive vaccinations.

Biden on Thursday takes that message to Chicago, where he will visit a suburban construction site run by Clayco, a large building firm that is set to announce a new vaccinate-or-test requirement for its workforce. The company is taking action weeks ahead of a forthcoming rule by the Occupational Safety and Health Administration that will require all employers with more than 100 employees to require that their staffs be vaccinated or face weekly testing for the coronavirus.

White House officials said Biden will encourage other businesses to follow suit, by taking action ahead of the OSHA rule and to go even further by requiring shots for their employees without offering a test-out option.

Biden is also set to meet with the CEO of United Airlines, Scott Kirby, whose company successfully implemented a vaccine mandate — with no option for workers to be tested instead. Less than 1% have failed to comply and risk termination.

But Biden’s mandates have “worked spectacularly well,” said Lawrence Gostin, a public health expert at Georgetown University’s law school. He added that the President’s rules have also had a “modeling effect” for cities, states and businesses. That’s what the White House intended.

U.S. officials began anticipating the need for a more forceful vaccination campaign by April, when the nation’s supply of shots began to outpace demand. But political conditions meant immediate steps to require shots would have likely proved counterproductive.

The idea of mandatory vaccination faced pushback from critics who argue it smacks of government overreach and takes away people’s rights to make their own medical decisions.

So first, officials engaged in a months-long and multibillion-dollar education and incentives effort to persuade people to get the vaccines of their own accord.

By midsummer, the more transmissible delta variant of the virus was eroding months of health and economic progress and the rate of new vaccinations had slowed to a trickle. Biden’s strategy shifted from inducement to compulsion, with a slow, and deliberate heightening of vaccination restrictions.

“It’s a good political strategy, but it also is a good public health strategy, because once you have a lot of people that have already been vaccinated. then mandates become more acceptable,” Gostin said.

It started with a vaccination requirement for federal frontline health workers serving veterans in VA hospitals. Then the military, followed in steady succession by all healthcare workers reimbursed by the government, all federal workers, and then the more than 80 million Americans who work at mid- and large-size companies.

Nearly 100 million adult Americans were unvaccinated in July — a figure that has been cut by a third since federal, state and private-sector mandates have been imposed.

In conjunction with the President’s trip to Chicago, the White House was releasing a report outlining the early successes of vaccine mandates at driving up vaccination rates and the economic case for businesses and local governments to implement them. It points to everything from reduced employee hours to diminished restaurant reservations in areas with fewer vaccinations, not to mention markedly reduced instances of serious illness and death from the virus in areas with higher vaccination rates.

Millions of workers, the White House notes, say they are still unable to work due to pandemic-related effects, because their workplaces have been shuttered or reduced service, or because they’re afraid to work or can’t get child care.

“The evidence has been overwhelmingly clear that these vaccine mandates work,” said Charlie Anderson, director of economic policy and budget for the White House COVID-19 response team. “And so now, I think it’s a good time to lift up and say, ‘Now’s the time to move, if you haven’t yet.’”

While mandates are the ultimate tool to press Americans to get vaccinated, Biden has resisted — at least thus far — requiring shots or tests for interstate or international air travel, a move that legal experts say is within his powers. But officials said it was still under consideration.

“We have a track record, and I think it’s clear, that shows that we’re pulling available levers to require vaccinations,” said Jeff Zients, the White House COVID-19 coordinator. “And we’re not taking anything off the table.”