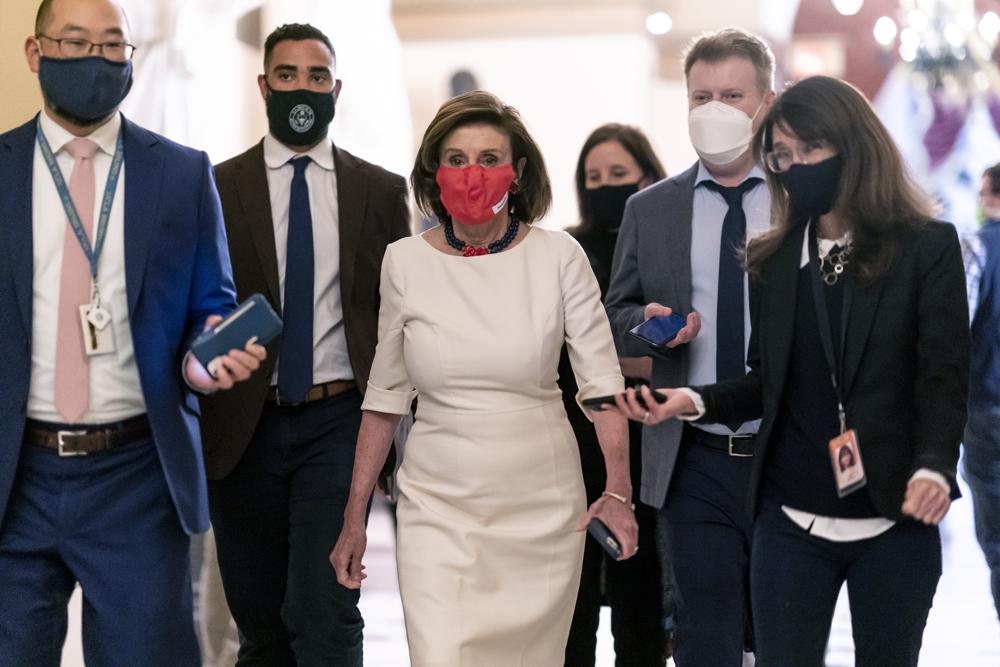 It will likely have a higher price tag than what's discussed in the Senate.

Democrats in the House appear on the verge of advancing President Joe Biden’s $1.85 trillion-and-growing domestic policy package alongside a companion $1 trillion infrastructure bill in what would be a dramatic political accomplishment — if they can push it to passage.

The House scrapped votes late Thursday but will be back at it early Friday, and White House officials worked the phones to lock in support for the president’s signature proposal. After months of negotiations, House passage of the big bill would be a crucial step, sending to the Senate Biden’s ambitious effort to expand health care, child care and other social services for countless Americans and deliver the nation’s biggest investment yet to fight climate change.

Alongside the slimmer roads-bridges-and-broadband package, it adds up to Biden’s answer to his campaign promise to rebuild the country from the COVID-19 crisis and confront a changing economy.

But they’re not there yet.

House Speaker Nancy Pelosi worked furiously into the night at the Capitol Thursday and kept the House late to shore up votes. The party has been here before, another politically messy day like many before that are being blamed for the Democrats’ dismal showing in this week’s elections. On and off Capitol Hill, party leaders declared it’s time for Congress to deliver on Biden’s agenda.

“We’re going to pass both bills,” Pelosi insisted at a midday press briefing.

Her strategy now seems focused on passing the most robust bill possible in her chamber and then leaving the Senate to adjust or strip out the portions its members won’t agree to. The House Rules Committee processed final revisions including to a state-and-local tax deduction in a brief meeting late Thursday in preparation for floor votes.

Half the size of Biden’s initial $3.5 trillion package, the now sprawling 2,135-page bill has won over most of the progressive Democratic lawmakers, even though it is smaller than they wanted. But the chamber’s more centrist and fiscally conservative Democrats continued to mount objections.

Overall the package remains more far-reaching than any other in decades. Republicans are fully opposed to Biden’s bill, which is called the “Build Back Better Act” after the President’s 2020 campaign slogan.

The package would provide large numbers of Americans with assistance to pay for health care, raising children and caring for elderly people at home.

There would be lower prescription drug costs, limiting the price of insulin to $35 a dose, and Medicare for the first time would be able to negotiate with pharmaceutical companies for prices of some other drugs, a long-sought Democratic priority.

Medicare would have a new hearing aid benefit for older Americans, and those with Medicare Part D would see their out-of-pocket prescription drug costs capped at $2,000.

The package would provide some $555 billion in tax breaks encouraging cleaner energy and electric vehicles, the nation’s largest commitment to tackling climate change.

With a flurry of late adjustments, the Democrats added key provisions in recent days — adding back a new paid family leave program and work permits for immigrants. Late changes Thursday would lift a $10,000 cap on state-and-local tax deductions to $80,000.

Much of the package’s cost would be covered with higher taxes on wealthier Americans, those earning more than $400,000 a year, and a 5% surtax would be added on those making over $10 million annually. Large corporations would face a new 15% minimum tax in an effort to stop big businesses from claiming so many deductions that they end up paying zero in taxes.

From the White House, “the pPesident has been very clear, he wants to get this moving,” said principal deputy press secretary Karine Jean-Pierre.

As night fell, Democratic leaders struggled to resolve a catalog of remaining issues as lawmakers balanced the promise of Biden’s sweeping vision with the realities of their home-district politics.

Biden has few votes to spare in the narrowly divided House and none when the bill ultimately arrives for consideration in the evenly split 50-50 Senate.

Five centrist Democratic lawmakers want a full budgetary assessment before they vote. Others from more Republican-leaning regions are objecting to a new state-and-local tax deduction that favors New York, California and other high-tax states. Another group wants changes to the immigration-related provisions.

In recent days, both the overall price tag and the revenue to pay for it have grown. A new White House assessment Thursday said revenue from the taxes on corporations and the wealthy and other changes are estimated to bring in $2.1 trillion over 10 years, according to a summary obtained by The Associated Press. That’s up from what had been $1.9 trillion in earlier estimates.

Pelosi noted a similar assessment Thursday by the bipartisan Joint Committee on Taxation, and she echoed Biden’s frequent comment that the overall package will be fully paid for.

But another model from the Wharton School at the University of Pennsylvania suggested a shortfall in revenue for covering the cost, breeding fresh doubts among some of the Democratic lawmakers.

Still, the Democrats in the House are anxious to finish up this week, eager to deliver on the President’s agenda and, as some lawmakers prepare to depart for a global climate change summit in Scotland, show the U.S. taking the environmental issue seriously.

Democrats have been working to resolve their differences, particularly with holdout Sens. Joe Manchin of West Virginia and Kyrsten Sinema of Arizona, who forced cutbacks to Biden’s bill but championed the slimmer infrastructure package that had stalled amid deliberations.

Manchin has panned the new family and medical leave program, which is expected to provide four weeks of paid time off after childbirth, for recovery from major illness or for caring for family members, less than the 12-week program once envisioned.

Senators are also likely to strip out a just-added immigration provision that would create a new program for some 7 million immigrants who are in the country without legal standing, allowing them to apply for permits to work and travel in the U.S. for five years. It’s not clear that addition would pass muster with the Senate parliamentarian under special budget rules being used to process the package.

On another remaining issue, Democrats are still arguing over a plan partly to do away with the $10,000 limit on state and local tax deductions that particularly hits high-tax states and was enacted as part of the Trump-era 2017 tax plan.

While repeal of the so-called SALT deduction cap is a priority for several Northeastern state lawmakers, progressives wanted to prevent the super-wealthy from benefiting. Under the revised plan, the $10,000 deduction cap would be lifted to $80,000 for nine years, starting with the 2021 tax year.