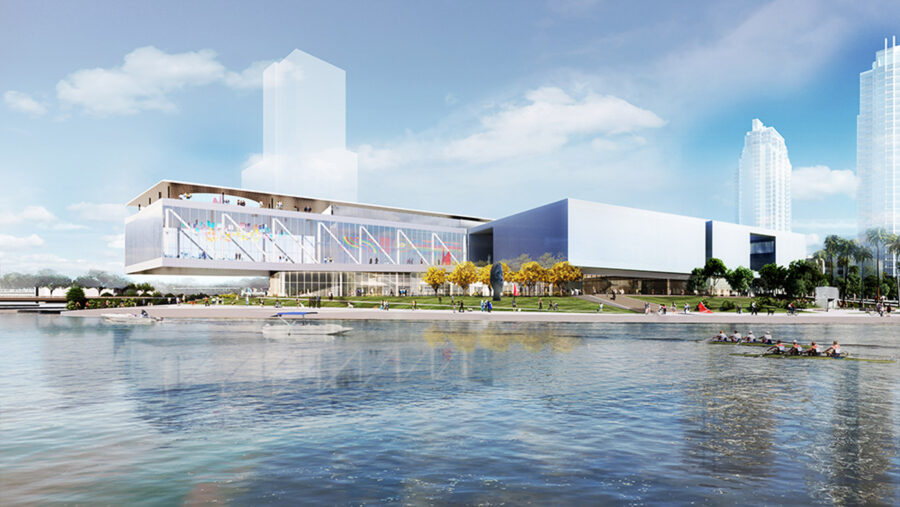 The goal — integrate the museum with Tampa's Riverwalk.

The Tampa Museum of Art has announced a $68 million expansion for its downtown Tampa campus set to be completed in 2024.

The renovation will add a four-story glass structure to the waterfront, expanding the museum’s education and event spaces. The expansion will include a site redevelopment and add about 51,000 square feet of new space along the Hillsborough River.

That’s in addition to the museum’s 25,000 square foot renovation currently underway to double its exhibition spaces and triple its education spaces.

“This is a transformational project for Tampa and the wider region,” Museum of Art Executive Director Michael Tomor said in a statement. “After announcing our renovation earlier this year, our board and community stepped up to allow the museum to grow even further, providing overwhelmingly generous support for our community partnerships and expanded education programs.”

New York-based WEISS/MANFREDI Architecture/Landscape/Urbanism is designing the expansion. The same firm is responsible for the current renovation of the existing museum building.

More than 80% of the $80 million budget for the current renovations and future expansion will be privately funded by the Museum’s Board of Trustees, the Foundation Board of Directors and other community supporters, patrons and members.

The lead gift toward the total $100 million campaign to expand the Museum’s facilities and invest in the Museum’s endowment is a matching gift from a community stakeholder who hopes to encourage others to participate in growing Tampa’s cultural legacy.

“The expansion of the museum is going to incorporate so many different amenities that will draw the community in and create a feeling of ownership,” Tampa Mayor Jane Castor said in a statement. “Looking at the future of the Tampa Museum of Art really goes hand-in-hand with the growth of our city as being very dynamic, very robust, and having something for everyone here in the city of Tampa.”

The museum’s site redevelopment of Curtis Hixon Park, a key component of the expansion project, has been partially funded through a grant from the Community Revitalization Area tax fund (CRA) and includes work on new pedestrian plazas and refurbishment of pedestrian walkways on Cass Street.

“I think with this addition, people will look at Tampa differently. Having lived in the Tampa Bay area all of my life, this city has been very important to me. I believe that the cultural life of the city is key to our long-term success, and I believe that a fine art museum is key to that cultural life,” Jerry Divers, chair of the Campaign Cabinet and president of the Tampa Museum of Art Foundation, said in a statement.

The goal is to integrate the museum with Tampa’s Riverwalk, bolstering the city’s downtown scene.

The expansion will extend beyond the physical building, with new landscaped public access points along Cass Street, creating a seamless transition with pedestrian plazas between the public park spaces adjacent to the Riverwalk, Curtis Hixon Waterfront Park and two new dog parks.

“We recognize that this expansion extends far beyond physical infrastructure, and our goal is to integrate the museum with the vibrant Riverwalk and downtown that surrounds it,” said Dianne Jacob, chair of the Tampa Museum of Art Board of Trustees. “The structure brings a huge ‘wow’ factor, but its welcoming communal spaces will bring the reinvented TMA to life for everyone.”

nextNick DiCeglie has raised more than $500K for his Senate bid