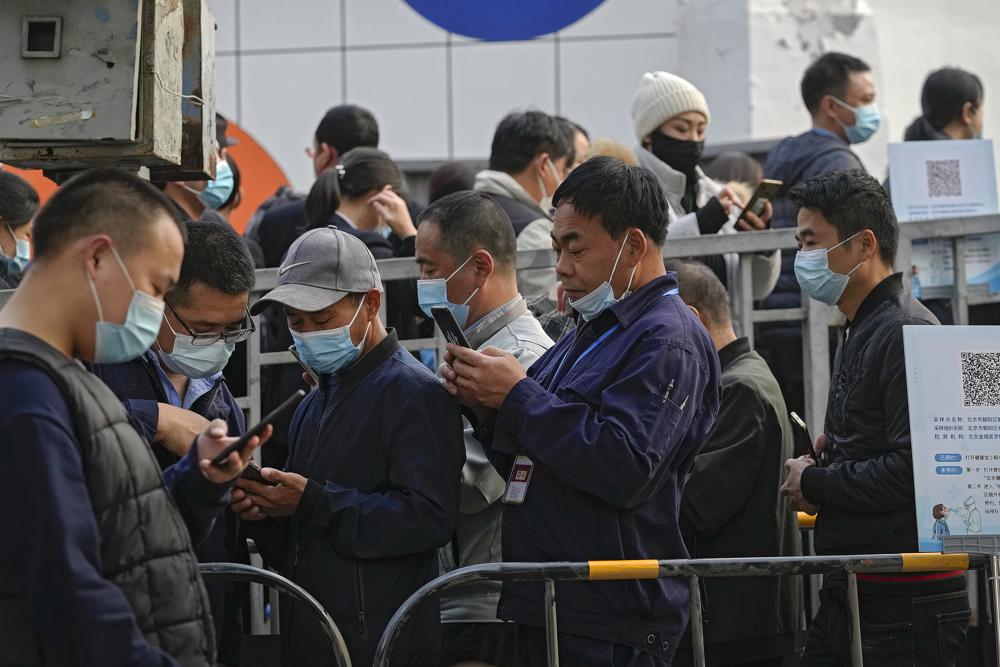 Wang Lijie planned to spend three days in the Gobi Desert last month to take in the area’s famous poplar forest as its trees turned a golden yellow.

Instead, the Beijing resident has been stuck for more than three weeks, much of it in quarantine, after authorities discovered a cluster of COVID-19 cases in a nearby city. He was among more than 9,000 tourists who became trapped in Ejin Banner, a remote part of China’s Inner Mongolia region that is in the Gobi.

As vaccination rates rise in many parts of the world and even countries that previously had strict COVID-containment strategies gingerly ease restrictions, China is doubling down on its zero-tolerance policy.

China pioneered that approach — of strict lockdowns, multiple rounds of mass testing and centralized quarantine — during the world’s first major outbreak of the coronavirus in Wuhan. And it continues now, even as it says it has fully vaccinated 77% of its 1.4 billion people and started giving booster shots.

“The cost is truly rather high, but compared with not managing it, relaxing (the zero-tolerance policy), then that cost is even higher,” Zhong Nanshan, a top government doctor, said in a recent TV interview.

The impact of the restrictions is not widespread — but unpredictable. Unlucky travelers can find themselves in the wrong place at the wrong time, like the tourists in the Gobi Desert, some of whom were bused 18 hours to finish their quarantine in another city. People from Beijing have complained online about leaving for a work trip and not being able to return home.

In a sign of the effect the regulations can have even on thriving businesses, the wildly popular hotpot restaurant chain, Haidilao, decided to shutter 300 outlets in part because of the pandemic and is scaling back a plan to add 1,200 new ones. The strain has been particularly felt in places like Ruili, a city in the southwest that has been locked down repeatedly this year.

But for authorities in Beijing, control over the virus has become a point of pride, a potent tool of propaganda — and proof, they say, of a superior form of governance. They often trumpet their success at keeping deaths relatively low, especially in contrast to the United States, whose COVID-19 response the Foreign Ministry spokesman has called a “total failure.”

“It’s becoming part of the official narrative that promotes that approach and links that to the superiority of the Chinese political system,” said Yanzhong Huang, a senior fellow at the Council on Foreign Relations.

It’s impossible to tell how much popular support the policies have since opinion polls are rare and criticism often censored. When Zhang Wenhong, a doctor in Shanghai who has been compared to top American health official Anthony Fauci, briefly raised the prospect of living with the virus, he was shut down by official criticism and a plagiarism investigation.

But the head of China’s Center for Disease Control, Gao Fu, recently suggested the country could open up once it is 85% vaccinated — a sign the government is aware that at least some are eager for that.

In the last three and a half weeks, Wang has had 18 tests for COVID-19. Yet, he isn’t complaining. He’s able to work remotely and has started a vlog of his daily life, interacting with residents of Inner Mongolia online.

“Regardless of the time you sacrificed, or how much money you spent, in the face of life, in front of health, those things are not worth mentioning,” said Wang. “For everyone’s health, for society to be more stable, some people have to make sacrifices.”

But China’s strategy sets it apart, as many countries shift to trying to live with the virus, especially as it continues to mutate and vaccines cannot fully prevent infection. Most notably, New Zealand, which had long pursued a zero-tolerance approach, announced last month a cautious plan to ease restrictions, despite a simmering outbreak. Australia, Thailand and Singapore — all of which imposed severe travel restrictions for much of the pandemic — have also begun to open their borders.

China, by contrast, slashed the number of international passenger flights allowed into the country by 21% last month to 408 flights per week until late March, while increasing the number of cargo flights by 28%.

In Singapore, which started allowing quarantine-free entry to fully vaccinated travelers from certain countries, the number of new cases has jumped to thousands a day from less than 100 before. But most are not winding up in the hospital.

“It’s just completely unrealistic to think that you can stay at zero,” said Dale Fisher, a professor in the National University of Singapore’s medical school.

But even if only a small percentage of infected people end up in hospitals, that could be a problem in China, with its huge population — and would be especially complicated for a government that has staked its reputation on keeping numbers very low.

“I think what the government leaders, and scholars and public health officials are worried about (is), even a small opening may lead to bigger outbreaks on a much larger scale,” said Huang, of the Council on Foreign Relations.

Some of the most dramatic examples of China’s policy come from Ruili, which is bordered on three sides by Myanmar and has struggled to keep the virus at bay.

Videos of a 21-month-old boy with round cheeks who has been tested 78 times have circulated widely online. The boy’s father declined an interview but confirmed he shot the videos, which have inspired empathy, but have also been used by state media as propaganda to show how tough Chinese citizens are.

One Ruili resident, who gave only his last name Xu, said he’s lost count of how many tests he’s taken. At the height of one lockdown, community volunteers threatened to fine him when he went to throw out the trash.

To leave the city, he must pay for seven days of hotel quarantine — just go to a town 6 miles away. The restrictions have devastated his business, which sells jade from Myanmar.

The Ruili government announced in late October that it would give 1,000 yuan (about $150) to residents who had experienced hardship, and that it would allow small- and medium-sized businesses to defer loan payments.

In the Xinjiang region in China’s west, Li Hui has been sealed up for about a month in the city of Yili, where a few cases were discovered in early October.

His mother, who lives in a nearby village, twisted her wrist, but initially could not come into the city for treatment because of the restrictions. After much pleading, he got an ambulance to take her to a hospital a week after her injury. He still can’t visit her.

“I don’t know how long Yili’s residents can endure,” he said. “I really can’t endure it anymore.”

Reposted with permission from the Associated Press,

nextHow did Parents’ Bill of Rights turn into a mask mandate controversy in Florida schools?