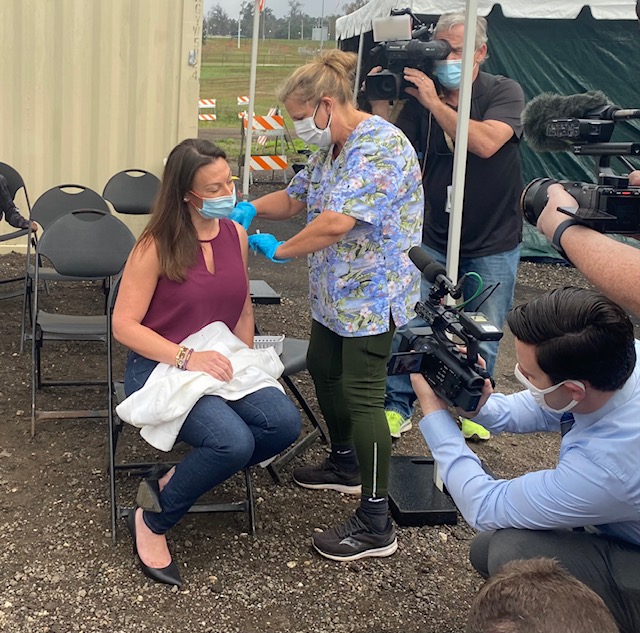 She said she got the extra jab to show how state officials should lead in response to the rise in cases.

Agriculture Commissioner Nikki Fried publicly received her COVID-19 booster shot on Wednesday, drawing yet another contrast between her and Gov. Ron DeSantis as the state grapples with a major spike in infections.

The 44-year-old Fried was inoculated at a clinic on the campus of Florida A&M University and called on other Floridians to take actions to battle the surge connected to the growth in the omicron variant.

Fried said she got the extra jab to show how state officials should lead in response to the rise in cases and she did it publicly to “make sure that people see it’s safe, reliable and really encouraging everyone to get the boosters.”

DeSantis got a shot for COVID-19 earlier in this year, but he has sidestepped questions over whether he has gotten a booster. His administration has responded to the surge by setting up treatment centers, but so far has not taken a lead or public role in urging Floridians to get boosted.

The latest data from the Centers for Disease Control and Prevention shows Florida has reported more than 179,000 COVID-19 cases in the past week. More than 62,000 Floridians have died from COVID-19 since the beginning of the pandemic.

Fried, who does not oversee any of the state agencies that deal with public health or emergencies, sent a letter to the Governor on Tuesday calling on him to take a series of steps in response to the rising caseloads. She said the state should help set up additional testing sites as well as ramp up the administration of booster shots to residents and staff of nursing homes.

“We are all in this together. I know no one want’s to be talking about this. No one wants to be hearing about COVID anymore. Everybody wants to get back to their lives,” Fried said at the busy site down the road from the Capitol. “And there are people out there that don’t believe COVID is still existing. And for those people I just say, ‘respect those that do. Respect those that have lost loved ones in this and are taking it seriously. And we are going to get through this.’”

State Surgeon General Dr. Joseph Ladapo sent his own letter to Health and Human Services Secretary Xavier Becerra on Tuesday faulting federal authorities over distribution of monoclonal antibody treatments to states. In his letter, Ladapo said the federal government was creating a “life-threatening shortage” as the omicron variant spreads.

The company that manufactures one of the treatment options — Regeneron — announced earlier this month that its antibody cocktail has “diminished potency” against the omicron variant but remains active against the delta variant.