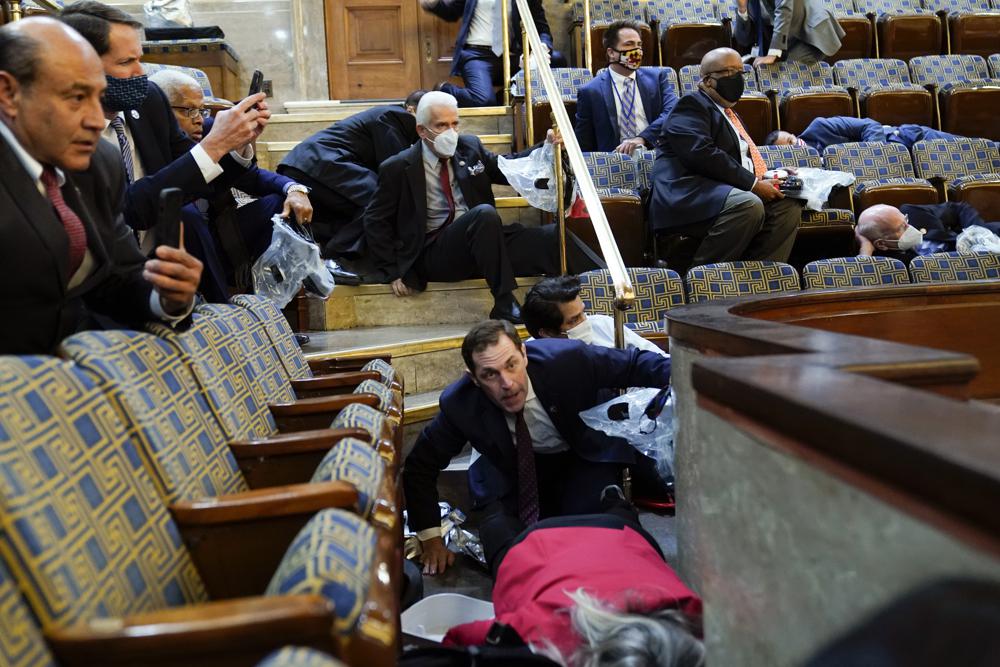 As danger neared and rioters tried to break down doors, they called their families.

Long after most other lawmakers had been rushed to safety, they were on the hard marble floor, ducking for cover.

Trapped in the gallery of the House, occupying balcony seats off-limits to the public because of COVID-19, roughly three dozen House Democrats were the last ones to leave the chamber on Jan. 6, bearing witness as the certification of a presidential election gave way to a violent insurrection.

As danger neared, and as the rioters were trying to break down the doors, they called their families. They scrambled for makeshift weapons and mentally prepared themselves to fight. Many thought they might die.

“When I looked up, I had this realization that we were trapped,” said Rep. Jason Crow, D-Colo., a former Army Ranger who served three tours of duty in Iraq and Afghanistan. “They had evacuated the House floor first. And they forgot about us.”

Bound together by circumstance, sharing a trauma uniquely their own, the lawmakers were both the witnesses and the victims of an unprecedented assault on American democracy. Along with a small number of staffers and members of the media, they remained in the chamber as Capitol Police strained to hold back the surging, shouting mob of supporters of then-President Donald Trump.

The lawmakers were finally taken to safety roughly an hour after the siege began.

Interviewed by The Associated Press before this week’s anniversary of the attack, 10 of the House members who were in the gallery talked of being deeply shaken by their experience, recalling viscerally the sights and sounds amid the chaos.

Vividly they remember the loud, hornetlike buzz of their gas masks. The explosive crack of tear gas in the hallways outside. The screams of officers telling them to stay down. The thunderous beating on the doors below. Glass shattering as the rioters punched through a window pane. The knobs rattling ominously on the locked doors just a few feet behind them.

And most indelibly, the loud clap of a gunshot, reverberating across the cavernous chamber.

“I’ve heard a lot of gunshots in my time, and it was very clear what that was,” Crow said. “I knew that things had severely escalated.”

The shot was fired by Officer Michael Byrd and killed Ashli Babbitt, a Trump supporter from California who was trying to crawl through the broken window of a door that leads to the House chamber. Both the Justice Department and Capitol Police investigated the shooting and declined to file charges.

While the gunshot dispersed some of the violent mob, the lawmakers ducking in the gallery believed the worst was just beginning.

“I think all of us, myself included, had images of a mass-shooting event,” said Rep. Peter Welch, D-Vt., who posted video updates on Twitter as the chaos unfolded. “It was terrifying in the moment.”

Rep. Mike Quigley, D-Ill., said he could tell the gunshot had come from the back of the chamber, in the Speaker’s Lobby just outside, and not from the main doors on the opposite side where they could see rioters trying to break through. In that moment he realized why they couldn’t leave — they were surrounded. “It was in stages that you realized the severity,” he said.

Their terror was compounded by knowledge of what the mob was after: stopping Congress from certifying the Electoral College votes that would make Joe Biden the 46th president of the United States. Mike Pence, as is customary for the vice president, had been presiding over the ceremony in the House chamber where lawmakers were gathered to hear the certified results from all 50 U.S. states and the territories.

Trump had other ideas.

Spouting lies about election fraud that were refuted by his own Justice Department, Trump pressured Pence to reject the electors — a move that would have bucked the Constitution and thrown the House, and potentially the country, into chaos. Pence refused to do so, but Trump held a rally in Washington before the vote-counting began, telling hundreds of supporters at the Ellipse to “fight like hell.”

Members of the mob chanted “Hang Mike Pence” as they forced their way into the Capitol, brutally overpowering police who stood in their way. Dozens were injured, some seriously, and four officers who were there that day later took their own lives.

Rep. Val Demings, D-Fla., was among those sheltering in the gallery. She tried to remain calm, drawing on what she learned as chief of the Orlando police. But she also felt powerless, lacking a gun or any of the other weapons she always had on the beat.

She shuddered when police said there had been a “breach” of the building.

“That is probably the word that I will remember about that day for the rest of my life more than any other,” Demings said. “I knew that meant that the police had somehow lost the line. And I also know, having been a former police officer, that they would have done everything in their power to hold that line to protect us.”

She says she told a colleague sheltering with her in the gallery: “Just remember, we’re on the right side of history. If we all die today, another group will come in and certify those ballots.”

In the days after the attack, many of the lawmakers who were in the gallery started connecting on a text message chain. It quickly evolved into therapeutic group sessions and even potluck gatherings where they tried to make sense of it all.

They dubbed themselves “the gallery group,” and the name stuck.

The Democrats were social distancing in the balcony as they waited to speak on the floor at the invitation of House Speaker Nancy Pelosi, D-Calif., and those interviewed said they don’t recall any Republicans sheltering alongside them. GOP Rep. Kelly Armstrong of North Dakota was in the gallery at the beginning of the insurrection and recounted the ordeal to a local news outlet that evening. But he declined to be interviewed. A handful of other Republicans, including Reps. Markwayne Mullin of Oklahoma and Troy Nehls of Texas, helped police barricade the door below.

Some of the Democrats who sheltered in the gallery are planning to spend time together at the Capitol this week, not only to remember their own experiences and honor those who protected them but also to reflect on the country’s narrow escape from a coup.

“We were the last people in the chamber,” said Rep. Mikie Sherrill of New Jersey, a former Navy helicopter pilot. “I think we saw the whole thing play out in a way that is very different from anybody else on the Hill.”

Rep. Pramila Jayapal of Washington state helped organize the first virtual session the Sunday after the insurrection. She received multiple texts from colleagues after she spoke up on a Democratic caucus call about what the group went through and how they felt forgotten.

“It ended up being a three-hour Zoom,” Jayapal says. “It was deeply personal. People shared a lot of things about what they were going through. There were a lot of tears. There was a lot of anger. There was a lot of, you know, just how could this be? How could we be in America and have this happen in our Capitol?”

Many of the members went on to seek therapy. Some were diagnosed with post-traumatic stress, their struggles exacerbated by the raw tensions on Capitol Hill and an increasing number of death threats. Others said they have been more traumatized by the growing tendency among Republican lawmakers, and some in the public, to downplay or ignore the violence than they were by the attack itself.

Lawmakers said the gallery group has been a refuge through it all.

“I think it really saved my mental health,” says Rep. Norma Torres, D-Calif. “It just seemed like every time somebody posted something, we were all awake, no matter what time of day or night, and we were all responding to each other. So that was really powerful.”

Rep. Annie Kuster, who sought treatment for post-traumatic stress, says the gallery group connects almost daily on the text message chain, which moved to an encrypted app after some members raised security concerns. “Sometimes it’s to get a ride to a vote. Sometimes it’s, ‘Who’s cooking, and can you bring a bottle of wine to a dinner together?’ And sometimes it’s talking about our treatment for trauma and how we can preserve our democracy.”

Kuster, D-N.H., was one of the first to be let out of the gallery on Jan. 6, escaping through the doors along with three other members just before the remaining lawmakers were locked inside. When Kuster’s group reached the hallway, a group of rioters was rushing toward them.

“We ducked into the elevator,” Kuster said. “And I said to this incredible policeman — I said, oh, my God, what if the elevator doors open, and they kill us? And I will never forget this moment … he said, ‘Ma’am, I am here to protect you.’ And he was there to protect our democracy.”

For those still in the gallery, fear was escalating. Crow was tending to Rep. Susan Wild, D-Pa., who was in distress after talking to a family member, while also communicating with Mullin on the floor below as he helped barricade the door. Rep. Lisa Blunt Rochester, D-Del., was shouting a prayer for peace and healing. Jayapal, who had knee replacement surgery just a few weeks earlier and was using a cane, was trying to figure out how she would escape if she had to run. She held hands with some of her female colleagues crouching beside her.

Eventually, Capitol Police determined the upstairs area was clear, even as insurrectionists kept trying to break through the doors below. The lawmakers and others were rushed out of the chamber and down a warren of staircases and hallways. When they left, they could see police officers holding five or six rioters flat on the ground, guns pointed at their heads.

The rioters were just inches from the doors of the gallery.

Rep. Jim Himes, D-Conn., says he has tried not to dwell on what happened. But he still has searing images in his mind, including watching police drag heavy furniture in front of the main doors to the House floor as the rioters tried to beat them down.

As a member of the House Intelligence Committee, Himes says he spends a lot of time in high-security spaces — and before Jan. 6, he had assumed the Capitol was one of them.

“It was as though you were watching water flow uphill,” Himes said. “Something that you imagined was impossible is happening right in front of your eyes.”

Kuster says that one of the most traumatic things for her was not being able to see what was happening outside the chamber. They could only hear “the noises of the threat — the pounding on the door, the shouting in the hallways.”

When she made it home two days later, she watched hours of video from the insurrection, including harrowing footage from the police battles outside the building. It only compounded the trauma.

“I remember my husband coming in, and I was just sobbing,” Kuster said. “And he was holding me, saying, ‘I don’t know if this is the best thing for you to see.’”

“But we have to — we have to acknowledge the reality of what happened that day. And what’s challenging for us is that we are both victims and witnesses to the crime on our country.”

nextLouisiana governor to pardon Plessy, of ‘separate but equal’ ruling