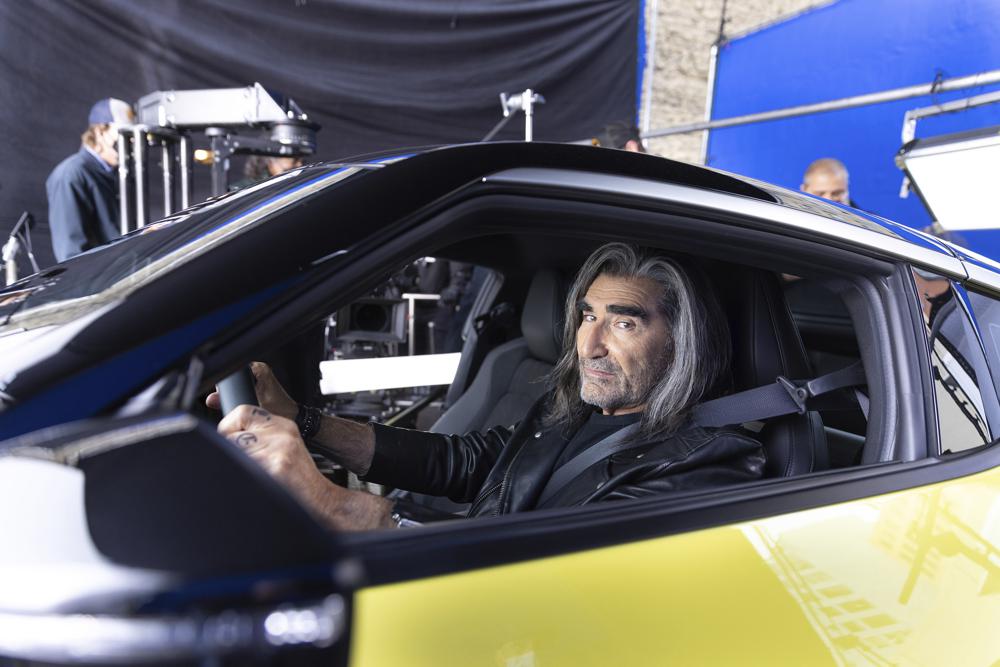 NBC sold out of its ad space briskly and said an undisclosed number of 30-second spots went for $7 million.

Super Bowl advertisers this year want Americans to forget about pandemic woes and focus on the future: of electric vehicles, mind reading Alexas, robots and cryptocurrency — and also to harken back to the nostalgic past of ’90s movies like “Austin Powers” and “The Cable Guy.”

The Los Angeles Rams are taking on the Cincinnati Bengals in Super Bowl 56 on Sunday at the SoFi Stadium in Inglewood, California. But for many, the big show of the night will be the commercials.

Advertisers are hoping to deliver a dose of escapism with light humor and star-studded entertainment amid the pandemic, high inflation and tensions between Russia and Ukraine.

“Marketers are recognizing Americans have had a very heavy, difficult two-year period and are responding by bringing some good old-fashioned entertainment for Super Bowl Sunday,” said Kimberly Whitler, marketing professor at the University of Virginia.

NBC sold out of its ad space briskly and said an undisclosed number of 30-second spots went for $7 million, a jump from the $6.5 million that last year’s ads went for.

Super Bowl ads at a glance

Super Bowl viewership has declined in recent years. Last year, 92 million people tuned in, according to Nielsen, the lowest viewership since 2007. But viewership at other big live events like the Grammys and the Oscars has also plummeted. Ratings for the Olympics — which NBC is broadcasting concurrent with the Super Bowl — are way down, too. So the Super Bowl remains the biggest night for advertisers.

This year’s ads will be amusing and warm, leading Kelly O’Keefe, CEO of brand consultancy Brand Federation, to dub this year the “Ted Lasso Super Bowl.” It’s not just because two of the Apple+ sitcoms’ stars are starring in ads — Jason Sudeikis for TurboTax and Hannah Waddingham for Rakuten.

It’s because the ads, like the sitcom, will be “nothing too heavy,” O’Keefe said. “It’s funny, positive, and makes you happy — but doesn’t go too deep.”

What does the future look like? Electric, if automakers have anything to do with it. With automakers back in full force this Super Bowl, BMW shows Arnold Schwarzenegger as Zeus, the god of the sky (or in this commercial, the god of lightning) whose wife, Salma Hayek Pinault, gives him the EV BMW iX to spice up retirement.

Kia showcases the Kia EV6, the brand’s first battery electric vehicle, in its ad, along with a cute “robo dog.” Nissan gives a nod to its all-electric 2023 Nissan Ariya.

A first time advertiser, Wallbox, showcases an actual survivor of being struck by lightning in its ad for its home electric vehicle charger.

Other advertisers are future forward too. Amazon’s spot shows real-life spouses living in a world where Amazon’s digital assistant Alexa can read your mind. In a regional ad, Samuel Adams shows Spot, the dancing robo-dog from Boston Dynamics, getting down with the brewer’s employees.

Bud Light NEXT, a new zero-carb Bud Light brand expansion, showcases an NFT in its ad. And Facebook gives a glimpse of its vision of the metaverse in a humorous ad that shows a discarded animatronic dog meeting up with his pals again in the metaverse.

Among the 30 new advertisers are several cryptocurrency exchanges. Advocates of the blockchain-based digital currencies that have captured the interest of investors and financial service firms alike, want to lure regular Americans too. Exchanges Crypto.com, FTX and eToro have all announced Super Bowl ad plans, and others have been rumored but not confirmed.

While the Super Bowl can be a good place to launch a new brand or category into the public consciousness, there are risks of getting lost in the shuffle as first-time advertisers. And they have a big task with 30 seconds.

“They need to educate the public on what their product is, why it’s not risky, and where they can access it,” Villanova’s Taylor said.

Nostalgia is always a safe bet to win over viewers, and this year’s Super Bowl is no different.

In a teaser, Verizon hints that it’s bringing back Jim Carrey to reprise his loathsome 1996 “Cable Guy” character for their ad. GM has enlisted Mike Myers for an “Austin Powers”-themed ad that features a reprise of his role as Austin Powers’ nemesis, Dr. Evil. Sidekicks played by Rob Lowe, Seth Green and Mindy Sterling also join.

And some ad executives are hoping people can still remember iconic advertising as well. ETrade hinted in a teaser that it’s bringing back the spokesbaby that appeared in its Super Bowl ads from 2008 to 2014. A Hellmann’s ad shows Washington Commanders’ linebacker David Mayo tackling unsuspecting people who waste food. The ad is an homage to a 2003 Reebok Super Bowl ad starring a fictional linebacker named Terry Tate who tackled office workers who weren’t being productive.

A well-liked celebrity generally adds some goodwill to a brand message. So how about three to five of them? Super Bowl ads are always stuffed with celebrities, but this year, many ads are overstuffed with them.

“I’ve ever seen anything like this number of A-List celebrities,” said Villanova’s Taylor.

Uber Eats wanted to get across the message that you can order household items and other sundries from its delivery service, not just food. So its ad shows celebrities and other actors trying to eat everything from cat litter to diapers. “If it was delivered by Uber Eats, does that mean I can ‘Eats’ it?” White Lotus actor Jennifer Coolidge asks. Gwyneth Paltrow tries to eat a candle, Trevor Noah tries to eat a light bulb and Nicholas Braun from “Succession” tries to eat dish soap.

Most advertisers are steering clear of sentiment.

“People are avoiding the deeper issues,” said Brand Federation’s O’Keefe. “People aren’t going to try to unite us or divide us or get us to think deeply. Ads will be much more amusing. But also very safe.”

A few, though, are delivering heartfelt messages.

The Budweiser brand, absent last year, returns with a spot centered on one of its Clydesdale mascots. After it’s injured by jumping a barbed wire fence — a not-so-subtle reference to the U.S. and the coronavirus pandemic — another Budweiser mascot, a Labrador, a stableman, and a vet, help the Clydesdale recover and gallop again. Budweiser wanted to return “with a message of strength and resilience,” said Daniel Blake, group vice president at Anheuser-Busch.

Google’s ad for the Pixel 6 stars the singer Lizzo and focuses on how the phone’s camera highlights darker skin tones. And Toyota’s ad, which debuted during the Olympics but will also run during the Super Bowl, tells the story of the McKeever Brothers, cross-country skiers who have won 10 Paralympic medals together.

previousWinner and Loser of the Week in Florida politics — Week of 2.6.22