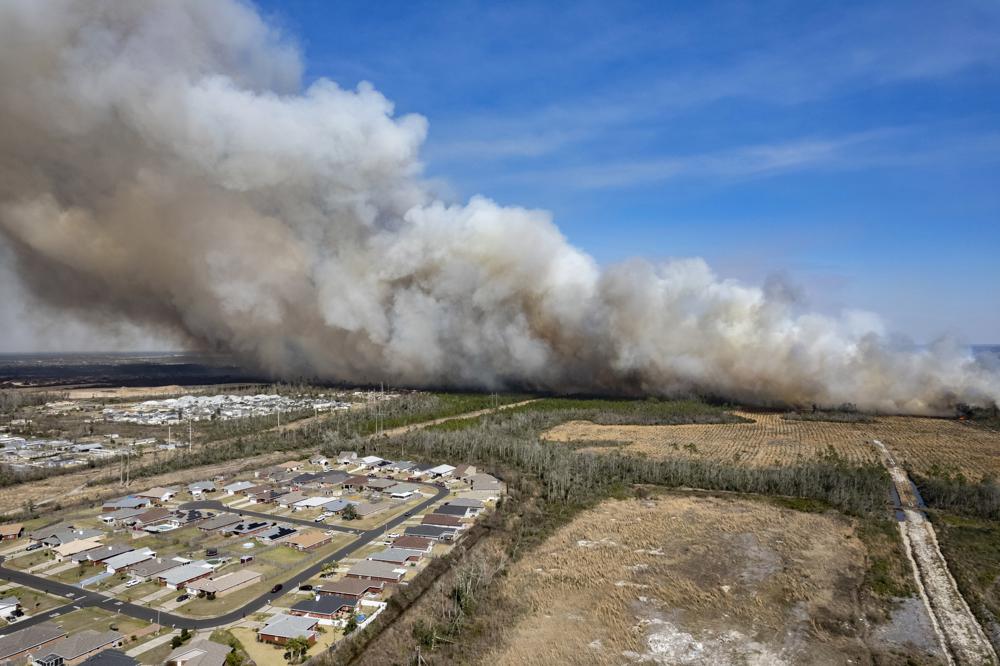 Gov. Ron DeSantis has expanded his executive order declaring a state of emergency for Bay County, adding Calhoun and Gulf counties as firefighters battle thousands of acres of wildfire.

The Florida Forest Service is encouraging motorists and residents to remain clear of the area. The fire has spread across 9,000 acres in the Hurricane Michael impact area, where million of tons of trees were destroyed and now serve as fuel for wildfires. And, due to the lack of recent rainfall, strong winds and an increase in drought conditions, another wildfire developed over Northwest Florida Saturday. By Sunday morning, it had burned 8,000 acres with a containment of 10%.

“We’re concerned about the wind and what it might do to this fire, so the State Fire Marshal’s Office will continue coordinating with the Governor’s Office, Forestry, the Bay County Sheriff’s Office and other local fire departments until this threat has been neutralized. Until then it’s extremely important area residents pay attention and follow the directions of their local officials,” State Fire Marshal Jimmy Patronis said in a statement.

DeSantis, Patronis and Florida Division of Emergency Management Director Kevin Guthrie toured the damage from the wildfire Saturday and met with local officials.

“We will continue to support Bay County residents while first responders work diligently to contain the fire,” DeSantis said in a statement. “Residents in Bay County should ensure their safety by continuing to follow all orders from local officials while the fire remains active.”

Earlier Saturday, FDEM started mobilizing additional resources to have on standby to support response efforts. The department requested a drone assessment team, a mobile command vehicle and air operations support from the Florida National Guard, which stands ready to assist if necessary.

“There are a lot of folks that want to go home and these first responders are working around the clock to ensure they have a home to go back to,” Patronis said in a statement. “This fire is being fueled by the dead remnants of Hurricane Michael, and because of the type of region we’re at, there are no fire hydrants in the area — so water has to be trucked in. That’s why so many fire departments from across the Panhandle have been responding.”

FDEM’s request for a Fire Management Assistance Grant (FMAG) was approved by the Federal Emergency Management Agency (FEMA). The FMAG will assist with offsetting costs associated with responding to the wildfire.

The Adkins Avenue Fire was estimated at 1,000 acres on Friday. As of Sunday morning, it has now stretched to an additional 400 acres with 35% containment. More than 600 homes have been evacuated. Two structures have been confirmed destroyed and 12 structures confirmed damaged. When the fire will be fully contained is unknown at this time, and the cause is under investigation.

The Florida Forest Service has deployed more than a dozen tractor plow units as well as multiple helicopters to the Adkins Avenue Fire. Resources from local and county fire and emergency services are also on scene. There are more than 200 firefighters from across the Panhandle working to help suppress the wildfire.

“I’ve instructed the Florida Forest Service to apply for the FEMA Fire Management Assistance Grant in response to the Adkins Avenue Fire,” said Agriculture Commissioner Nikki Fried in a statement. “We will remain in close contact with our partners on the ground to ensure a swift, coordinated emergency response.”

DeSantis and Fried were among the many state leaders who showed up Saturday in Panama City in response to the Adkins Road Wildfire. The Governor noted that timber, left over from Hurricane Michael’s destruction in 2018, is a fire risk here and going forward, citing local concern about the problem.

“Fire danger levels are elevated statewide,” Erin Albury, State Forester and Director of the Florida Forest Service, said in a statement. “It is important for residents to use extreme caution and remain aware of current wildfire activity.”