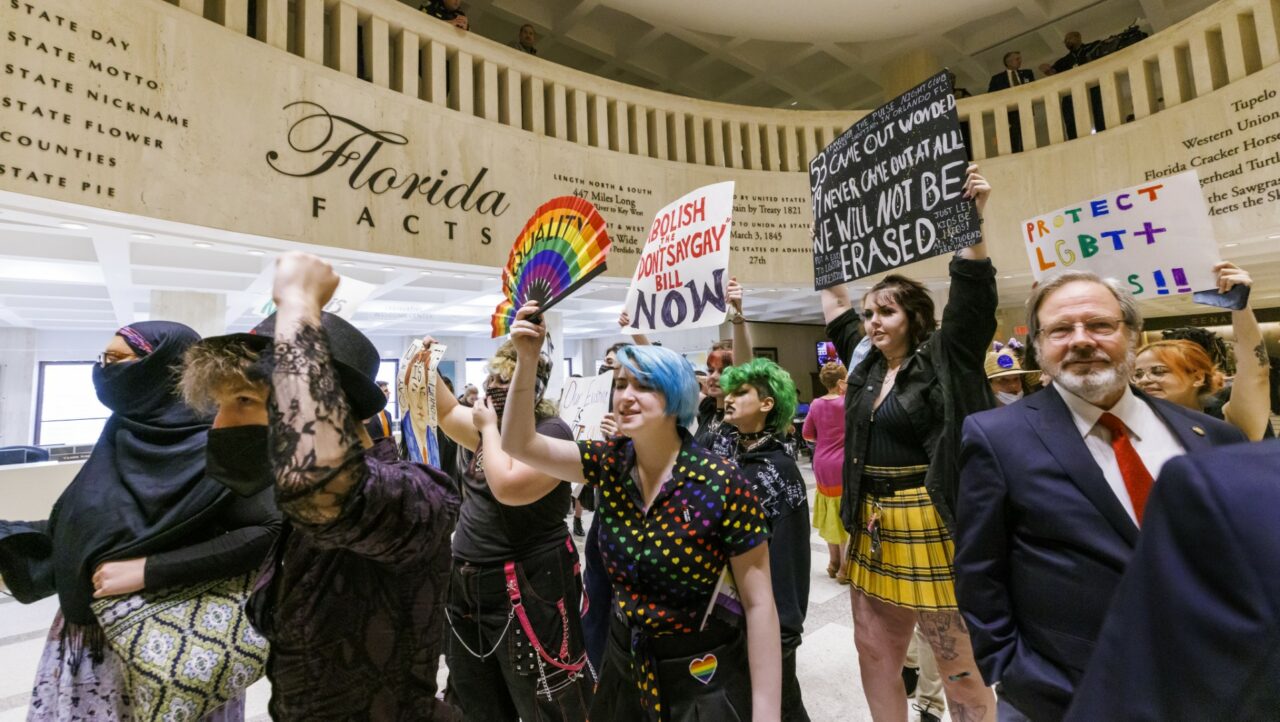 It’s only been a few hours since Gov. Ron DeSantis signed the controversial HB 1557 into law, but Equality Florida quickly organized a news conference via zoom to condemn what speakers called a cowardly act.

The Governor announced his news conference to sign the bill with less than an hour’s notice. WFLA’s Evan Donovan said his station got a call to let them know the conference was happening before an email went out, breaking communication norms.

RIGHT NOW: Governor’s office called @wfla to notify us DeSantis will appear at Classical Preparatory in Spring Hill at 12:30pm.

Typically there’s an email (like below), but so far none.

“Gov. Ron DeSantis signed the ‘Don’t Say Gay’ bill in the most cowardly way possible today,” Senior Political Director for Equality Florida Joe Saunders said. “He hid his agenda from the media and the public until the last moment, skulking onto a charter school campus that is exempt from the law and away from students who would protest his presence.”

“He’s a coward and he knows that there are more against him than with him,” Rayner argued. “What I will not do in my capacity, as long as I have this capacity and platform, is allow our children and allow our community to be harmed by bigoted people who are more concerned about power than they are concerned about people.”

Saunders used the call to announce that a lawsuit against the bill would be coming and promised “swift and fierce” litigation. He said one of the most harmful aspects of the bill is the freedom it gives some parents to sue others if they feel parental rights are violated.

“We are announcing and launching a legal defense fund not just for school districts in the state, people who want to protect school districts from these specious lawsuits and litigation,” Saunders said, “but also for the parents and for the young people who will be harmed by this terrible bill.”

During the bill’s signing earlier in the day, DeSantis accused supporters of either not reading the bill or pushing an agenda if they had. He accused opponents of the bill of sexualizing kids.

“This law doesn’t solve any problem that exists. Instead, HB 1557 has been weaponized by the Governor’s Office to launch a bigoted smear campaign to attack and defame LGBTQ Floridians with baseless accusations of grooming and pedophilia,” Rep. Carlos Guillermo Smith said. “HB 1557 does absolutely nothing to prohibit conversations about sex, sexual activity or sex ed with young children, despite its proponents’ claims.”

Supporters of the bill argued that the language would remove conversations about sexual identity that might be inappropriate for young children. But during the signing, supporters said the “fight is clear” that the bill is about specific kinds of conversations.

“Do you think it’s appropriate for kids to walk into a classroom when they are five and six years old to learn about transgender instead of math or science or photosynthesis or whatever it is for that day?” Florida House Speaker Chris Sprowls said. “Do you think that’s appropriate?”

Saunders said the focus of opposition is section three of the bill, which reads: “A school district may not encourage classroom discussion about sexual orientation or gender identity in primary grade levels or in a manner that is not age-appropriate or developmentally appropriate for students.”

He said that language could have a chilling effect by making teachers afraid to broach topics pertaining to even the existence of the LGBTQ community, even if those children come from families with LGBTQ members or if the instructor is part of the community as well.

The bill’s proponents have denied that framing, arguing the legislation only deals with a school’s official curriculum. But Saunders argued the bill’s language is vague and broad. As written, it could remove any material referencing any kind of relationship, be it straight or gay. But so far, the only materials proposed for removal have been stories featuring LGBTQ parents, like And Tango Makes Three, the true story of two male penguins at the Central Park Zoo that cared for an egg and raised its hatchling together.

“The Governor wants to have it both ways. He wants to tell everybody who’s critical of the legislation — and specifically section three, which is where all of our focus has been — that we didn’t read it or if we did read it that we have some kind of hidden agenda,” Saunders said. “He’s publicly yelled at reporters who called it the ‘Don’t Say Gay’ bill, with some sort of homage to neutrality as if his intention is to scrub any reference of heterosexuality or straight families from curriculum. We know that that’s not true. And that’s not their intent.”

Janelle Perez is a candidate for state Senate from South Florida. She’s a married gay woman and mother of two. She said the Governor celebrating “freedom” and “parental rights” does not include all Floridians or all parents.

“Families like mine are going to be impacted by bills like this for years. My daughter is in pre-K for now. She’s going to enter kindergarten next year,” Perez said.

“How will her teachers be able to teach? How will her class interact with her on that first day of school when she draws a picture of her family? What’s that going to be like for her? How is she going to feel when the teachers won’t be able to talk openly or they’re going to be treading a line so carefully because this legislation is so broad. How are my kids going to feel? Gov. DeSantis spoke a lot about freedom of parents today. But you know which type of parents he didn’t mention? Me. Parents like me.”

nextNo. 25 on the list of Tampa Bay’s Most Powerful Politicians: Luis Viera