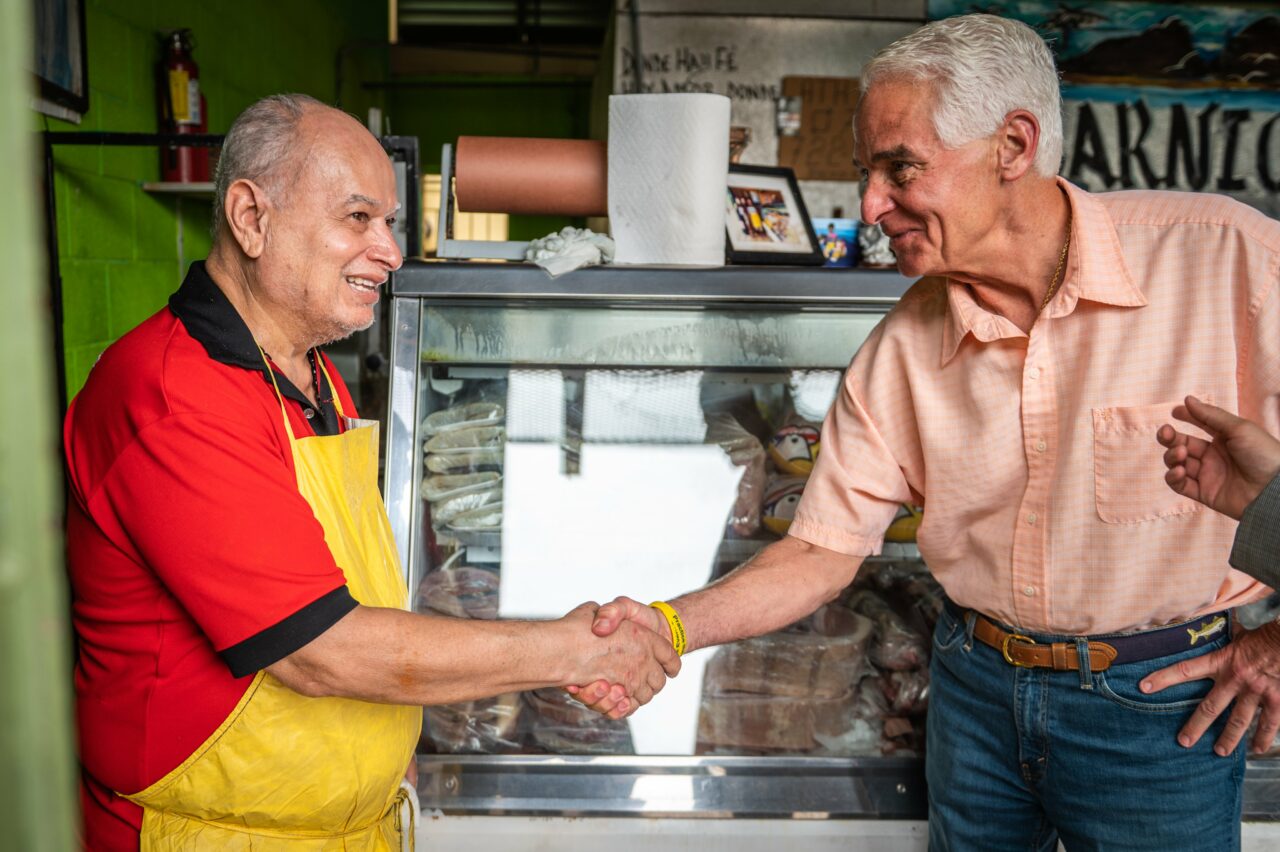 Charlie Crist promises to bring back "nice" to governing. Is it enough to derail Ron DeSantis?

Charlie Crist is a handshake politician in a soundbite world. His strength is one-on-one interaction because he remembers names, faces and conversations you might have from long ago, and it’s genuine.

He’s just a darned nice man and pretty smart too.

So it’s not surprising that he plays to his strength in his latest line of attack in his campaign for Governor. It’s his genial nature — his likeability, if you will.

That contrasts with the sandpaper edge Gov. Ron DeSantis often displays in and out of Tallahassee. He doesn’t mind letting anyone know that he’s in charge, and if that upsets people, too bad.

“We need somebody who can bring back good, as corny as that sounds,” Crist said at a recent campaign stop. “We have a Governor who acts like (Donald) Trump. It breaks my heart. It does because that doesn’t look like the real Florida. Floridians are good people.”

Well, most of them are, but that’s a column for another day.

Bring back good, and do it quickly.

That sounds, well, good — at least in theory, and it may be the biggest hole card Crist holds. However, DeSantis appears to have the confidence of someone who just drew a fourth ace. All his chips are in the center of the table because he is sure he is going to win.

DeSantis’ supporters view him as decisive, proactive and someone who freed them from the tyranny of mandatory face masks. If it means tradeoffs on a woman’s right to choose, what teachers can or can’t say, or what transgender kids can do, they seem cool with that.

They see DeSantis as strong, a man of action, and they like the direction the state has taken on his watch. His “free state of Florida” schtick resonates too, because we all love freedom, right?

And Charlie, well, he’s nice, but there are worse things to be.

Here’s the thing, though: DeSantis’ supporters appear to want him to do just that because they have a built-in distrust of career politicians. Charlie (that’s what he wants everyone to call him) is that. They believe whatever DeSantis tells them is wrong and must be fixed, and more importantly, they trust him to do that.

DeSantis’ ongoing feud with President Joe Biden and the Washington establishment plays extremely well with his base. And, well, Charlie is part of that establishment.

If it sounds like Charlie has moved past the Democratic Primary in August to concentrate on November, that’s because he probably has.

His two rivals for the nomination don’t seem to have any traction against him. Annette Taddeo’s campaign remains stuck in the mud, and every poll shows Nikki Fried well behind Charlie.

Remember how Rick Scott hammered on Bill Nelson’s age and career politician status months before the U.S. Senate election in 2018. Scott was consistent with that message that Nelson was too old and a creature of the Washington swamp, and it worked.

But then, the Governor reminds his supporters that he fights for them against the Mongrel Hordes of Oscar night hosts and other varlets, because he hears them. He probably picked up votes after Wanda Sykes, an Oscar host and openly gay, got off a zinger aimed at DeSantis.

DeSantis signed the so-called “Don’t Say Gay” bill on Monday, and the Oscar thing probably made it sweeter.

That’s the problem Charlie and the Florida Democrats face. They can paint the Governor in any way they want, but at this point, it won’t make much difference. It just makes his supporters love him more.

That’s a steep hill for a challenger to climb.

previousDiagnosis for 3.28.22: Checking the pulse of Florida health care news and policy

nextLast Call for 3.28.22 — A prime-time read of what’s going down in Florida politics