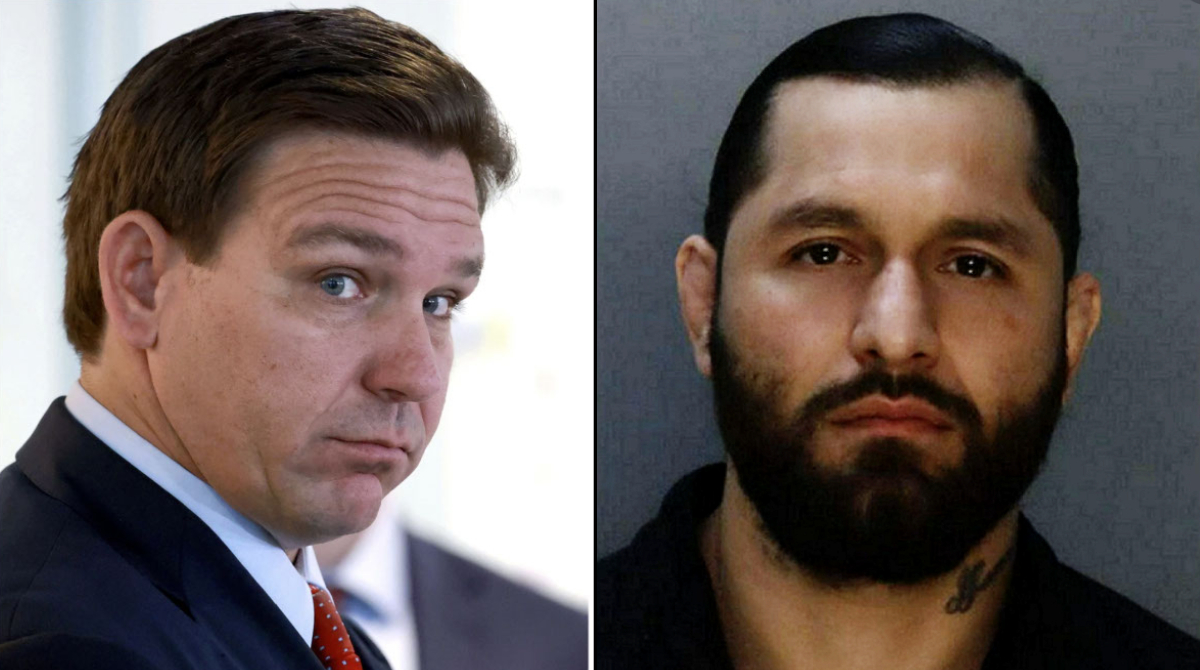 Gov. Ron DeSantis is moving forward with having UFC star Jorge Masvidal as the marquee guest of a Wednesday campaign event in Miami even though the fighter is now facing felony battery charges.

In a Tuesday email to those who registered for the event, DeSantis’ campaign advertised a special “DeSantis x Masvidal VIP Experience” for early arrivals who contribute $250 to his re-election bid.

In exchange for the optional campaign contribution, DeSantis’ team said each guest will receive VIP entrance, early admission, two drink tickets and an opportunity to “mix and mingle with Jorge Masvidal before the event begins.”

The Tuesday email arrived six days after Masvidal was taken into police custody for an alleged sucker-punch attack on Miami Beach. He is now out on bond and scheduled to next appear in court April 21.

Florida Politics was the first to report on the campaign event last week. Members of DeSantis’ campaign team have not responded to numerous requests for comment. 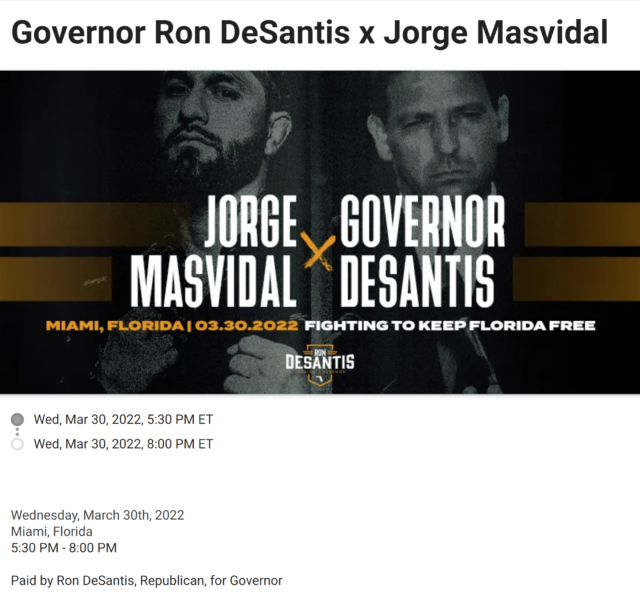 Masvidal turned himself in to police Wednesday following an incident two days before in which he allegedly sucker punched a man in the face twice outside the Papi Steak restaurant on Miami Beach. The victim suffered a fractured tooth.

Masvidal has been charged with aggravated battery with bodily harm and criminal mischief. Both are considered felonies. If convicted of the aggravated battery charge alone, a second-degree felony, Masvidal could face up to 15 years in prison and/or a $10,000 fine.

Masvidal pleaded not guilty to the charges.

See reports and booking photo below for more details. pic.twitter.com/OkW6LbZQHn

Police report of the incident did not name the man Masvidal allegedly punched in accordance with “Marsy’s Law” protections. However, video recorded during and after the incident — as well as witness accounts and several social media posts by Masvidal and his managers — confirmed it was Colby Covington, a one-time friend and now bitter rival whom Masvidal fought in a sanctioned UFC pay-per-view event March 5.

Pre-fight talk between the two men grew increasingly personal in the lead-up to their bout, with Masvidal repeating earlier claims that Covington lacked loyalty and cheated coaches out of rightfully earned pay and Covington lobbing assertions that Masvidal cheated on his wife and is a deadbeat dad.

“He’s out there cheating on his wife, cheating on his kids,” Covington said during a pre-fight press conference. “Saturday night, this is for (Maritza) Masvidal and all the people he backstabbed.”

When asked if, after the fight, he would be willing to let bygones be bygones, Covington gave an unequivocal no.

“Absolutely not,” he said. “Who wants to bury the hatchet with a criminal, with a thief, with a dirty scumbag? … He’s going to have to leave Miami.”

Covington then said if he saw Masvidal in Miami, Masvidal is “getting dropped on his head.”

In another interview, Covington said again he would drop Masvidal on his head “and he’s never going to be the same person again.”

In a post-fight interview at UFC 272: Covington vs. Masvidal in Las Vegas, Masvidal said he would still get physical if he ran into Covington in person. Both live and train in South Florida.

The statements by both men before and after the fight, as well as comments Masvidal made to the Nevada State Athletic Commission March 23 just hours before he turned himself in to Miami Beach police, could offer a glimpse into the defense Masvidal intends to use.

Masvidal told the NSAC he has an open case related to an incident of “mutual (combat) with another athlete.”

Under Florida law, “mutual combat” refers to when both parties in a physical altercation consent to fighting, thereby placing both participants legally at fault. To prove the crime of aggravated battery, prosecutors must establish beyond a reasonable doubt the defendant intentionally struck the victim against the victim’s will.

The consent doesn’t necessarily need to be verbal or given at the moment of the fight; however, prior case law has established that the defendant must not be the primary aggressor or initiate the fight. Rather, both parties must equally engage.

Following the incident, clips of a five-year-old interview Masvidal gave The MMA Hour’s Ariel Helwani resurfaced. In them, Masvidal described himself as being known on the streets of Miami-Dade County as having “one of the best sucker punches in the business.”

Masvidal and Covington have both voiced support and campaigned for former President Donald Trump, with the latter accepting an invitation to the White House.

In June 2020, amid the first wave of COVID-19, Masvidal took to Twitter to thank the Governor “for being so damn good” at his job and reopening the state.

Thank you @GovRonDeSantis for being so damn good at your job. State is opening. Pro sports welcome. People are safe. You showing the rest of the country how to do it #theresurrection

Two months later, he posted a fake news report on Instagram stating Tony Montana, the fictional character of Brian De Palma’s “Scarface,” was found dead with “29 Other Corpses, Two Tons of Cocaine” and a “Fully Auto AR-15,” which led authorities to “Determine Deaths Caused by: Covid-19.”

Masvidal wrote: “We know it’s not your fault Governor Desantis. I’m so glad you see past the bs.”

previousNo. 13 on the list of Tampa Bay's Most Powerful Politicians: Darryl Rouson