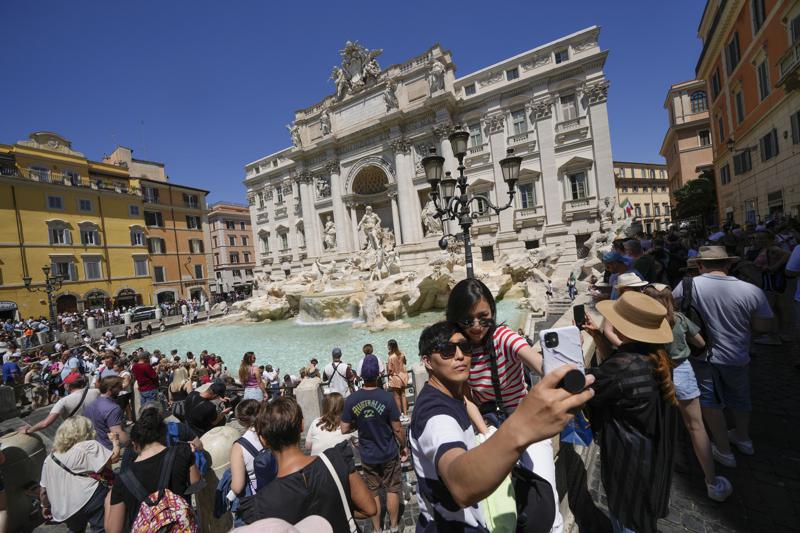 For all of the lifted virus travel restrictions, safety is not likely to recede as a concern.

At a tourism conference in Phuket last month, Thailand’s prime minister looked out at attendees and posed a question with a predictable answer.

“Are you ready?” Prayuth Chan-ocha asked, dramatically removing his mask and launching what’s hoped to be the country’s economic reset after more than two years of coronavirus-driven restrictions. When the crowd yelled its answer — yes, according to local media — it might have been speaking for the entire pandemic-battered world.

But a full recovery could take as long as the catastrophe itself, according to projections and interviews by The Associated Press in 11 countries in June. They suggest that the hoped-for rebound is less like a definitive bounce — and more like a bumpy path out of a deep and dark cave.

Some locales, such as the French Riviera and the American Midwest, are contributing to the climb more than others — like shuttered, “zero-COVID” China, which before the pandemic was the world’s leading source of tourists and their spending.

The human drive to bust out and explore is helping fuel the ascent, packing flights and museums despite rising coronavirus infections and inflation. But economic urgency is the real driver for an industry worth $3.5 trillion in 2019 that the United Nations estimates lost about that much during the pandemic. By some estimates, tourism provides work for one in 10 people on Earth.

Many places, particularly those that have loosened safety requirements, are seeing what passes for a go-go summer of sunny optimism and adventure.

“They are saying it’s the summer of revenge travel,” Pittsburgh resident Theresa Starta, 52, said as she gazed across one of Amsterdam’s canals at crowds thronging to the Dutch capital. “Everything seems so bad all around the world, so it’s nice to see some things coming back.”

“The road to a full recovery is very long, but at least we are back on it,” said Sanga Ruangwattanakul, president of the Khao San Road Business Association in Bangkok.

Despite the roaring return of travelers, challenges and uncertainty cast shadows over the post-pandemic landscape. Full recoveries are generally not expected until at least 2024. Concerns hovered around a long list of issues, including inflation, supply chain problems, rising infection rates and labor shortages.

Before June was over, chaos had come to define travel in the summer of 2022. Airports and airlines that had cut back during the depths of the pandemic struggled to meet the demand, resulting in cancelled flights, lost baggage and other, assorted nightmares. Spooked tourists booked trips on shorter notice, making it harder for hotels, tour operators and others to plan, industry insiders said.

The Russian invasion of Ukraine, too, added risk to the uneven recovery and contributed to inflation — a factor that could become a major obstacle even as other pandemic pain recedes.

“It’s really the fall season that is of concern,” said Sandra Carvao, chief of market intelligence and competitiveness at the U.N. World Tourism Organization. If inflation continues to rise, particularly interest rates, “families will have to rethink their spending.”

For all of the lifted virus travel restrictions, safety is not likely to recede as a concern.

“The most important thing for people when they decide to go on vacation is health and safety. Always has been,” said Simon Hudson, a professor of tourism at the University of South Carolina, who is writing a book about the pandemic recovery. “This is going to take awhile.”

Starting with the bright spots, the U.N. reported that during the first quarter of 2022, international arrivals almost tripled over the same three months last year. March this year produced the healthiest results since the start of the pandemic, with arrivals climbing to nearly 50% of 2019 levels. That could rise to as much as 70% of 2019 arrivals by the end of this year, the UNWTO said in projections it revised in May.

That’s produced encouraging signs in certain places, from Israel to the United States, Italy, Mexico and France. Resets like Thailand’s are all the rage. Big plans for 2023 are in the offing in the United States, such as a cruise featuring some of Broadway’s biggest stars.

Those projections are playing out on the ground, generally in places that had aggressive and agile restrictions early-on and adapted by lifting many protections as vaccinations rose and the omicron variant proved less lethal than other variants.

Foreign tourists are flocking to places like the French Riviera, where supply-chain issues are making everything more expensive — including champagne, one restauranteur said.

“It’s been summer here since spring, every single night,” said Elie Dagher, a manager of La Villa Massenet in Nice. Since April, he said, the bistro has been packed with visitors from Scandinavia and the Netherlands, but especially the United Kingdom and the United States.

In Branson, Missouri, known for its country music shows and outdoor attractions, no rebound is necessary. It hosted a record 10 million visitors last year and appears to be on pace to top that, said Lynn Berry, spokeswoman for the Branson Convention and Visitors Bureau.

Jeff Johnson, co-owner of Shepherd of the Hills adventure park, attributes that to a short shutdown in 2020, a loyal customer base drawn from nearby states and cities like St. Louis and Kansas City. “When we reopened,” he said, “it never slowed down.”

In Italy, tourists — especially from the United States — returned this year in droves. The run-up to Easter was especially notable in Rome, reflecting pent-up demand to visit perennial all-star sites like the Sistine Chapel and the Colosseum.

“There’s a huge craving to travel, just like popping a (cork) from a bottle,” said Bernabò Bocca, president of the national hotel association Federalberghi. The moment Italy loosened safety measures in April, “a tsunami of bookings arrived from the United States at a speed never seen before.”

Hopes are high for Thailand, too, in the wake of its announcement last month that the country was dropping virtually all requirements other than proof of vaccination, or in its absence, a negative coronavirus test.

Already the return of tourists has breathed new life into local tourism. Bangkok’s famous backpacker street, Khao San Road, almost deserted last year, is getting up to 5,000 visitors a day — promising numbers but a far cry from the 30,000 daily visitors before the pandemic, according to Ruangwattanakul, the business association president.

Thailand is an instructive look at the struggle to recover, with China a major factor. By 2019, Chinese tourists accounted for a quarter of foreign arrivals in Thailand, but there are no signs that they will return in such numbers.

The fitful nature of the post-pandemic climb could be seen from Israel to India.

“I think we are moving in the right direction,” said restaurant owner Vaibhav Khulbe in Dharmsala, India, where 4 million visitors are expected in country this year, compared to 11 million in 2019.

As elsewhere in the world, Israel is struggling to match its record-setting tourism of 2019, when 4.5 million people visited. Despite lifting all restrictions, Israel expects less than half that — about 2 million visitors — this year, Tourism Ministry officials say. Added to the other concerns, political strife is an issue after a wave of deadly Palestinian violence inside Israel in the spring, along with the collapse of the government last month.

Still, the ministry is reporting a steady, though gradual, climb. An unusual convergence of springtime religious holidays for Jews, Christians and Muslims helped boost visitors in April. By May, the number of visitors had risen to about 57% of the same month two years earlier.

But the recovery has been uneven for many, particularly in the occupied West Bank.

“We were expecting really more people to come at least this month, like May, June, but still it’s very slow,” said Wisam Salsaa, manager of The Walled Off Hotel in Bethlehem, the storied ancient city where President Joe Biden is expected to visit in July during a trip to Israel and Saudi Arabia.

Designed by London-based artist Banksy and brimming with color, the hotel is locally run and well-known — but struggling. It expanded physically during the pandemic but has been forced to whittle its staff from about 50 people to 32 now. In June, its occupancy rate stood at about 30%.