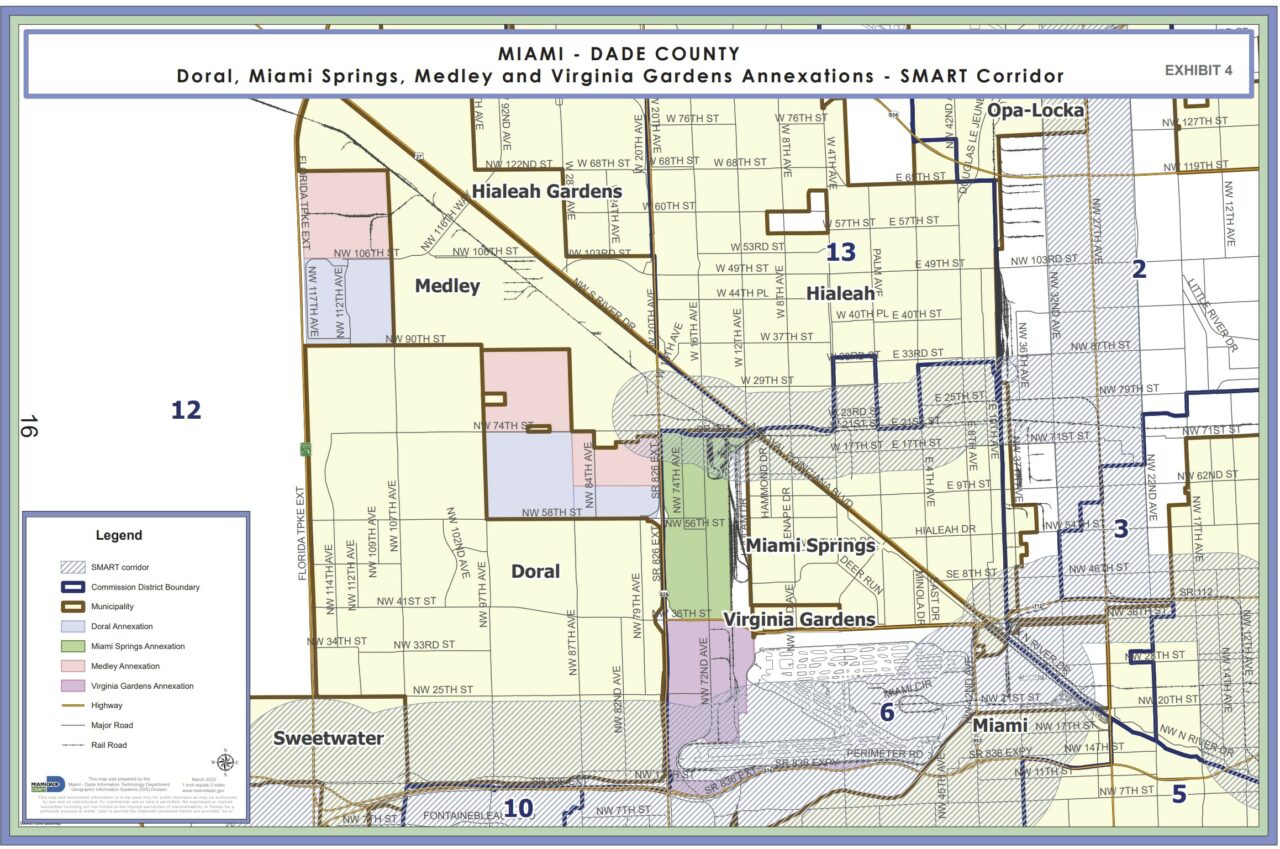 Property taxes in the areas are projected to rise by as much as $6,400. Some city officials have vowed to help those areas out, but those promises are nonbinding.

Four municipalities in Miami-Dade are closer than ever to fulfilling a nearly two-decade push to annex eight square miles of mostly industrial and commercial land in the county’s unincorporated area.

Miami-Dade attorneys are now drawing up the necessary resolutions and ordinances to make the changes. Commissioners will still need to vote on those items for the new city boundaries to take effect. Voters will have no say in the matter.

During a particularly lengthy meeting Thursday, Miami-Dade Commissioners held a second and final public hearing on annexation requests by the municipalities of Doral, Medley, Miami Springs and Virginia Gardens.

After more than two and a half hours of deliberation and comments from the community, almost all of which opposed the annexations, the County Commission approved every request before it.

Commissioner Joe Martinez was alone in voting against them all.

For property owners in two 1.6-square-mile commercial areas targeted for absorption by Miami Springs and Virginia Gardens, taxes are projected to shoot up by more than $6,000.

Officials from both municipalities vowed to mitigate the financial impact to the areas through reduced tax rates made possible by the expected increase in revenues each annexation would bring. However, those promises are nonbinding. County Commissioners did not require any of the cities to commit to any cost-saving actions in writing.

The financial strain would be less severe for those with holdings in two areas Doral hopes to take and another Medley has designs for, with tax hikes ranging from $414 to $1,742.

A third annexation by Doral of a one-square-mile area nearby still pends preliminary approval.

None of the areas has more than 250 registered voters or a 50% mix of land developed for residential purposes. As such, no vote by the public is required before the cities and counties approve boundary changes, according to Miami-Dade’s code.

As he’d done in previous discussions over potential annexations of non-residential areas, Martinez likened the annexations to “taxation without representation. He intends to sponsor legislation that would give property owners more say in the process.

“Everybody should have a right to have a voice, especially when it comes to their taxes,” he said.

That opinion was echoed in many of the public comments the County Commission fielded.

“None of the people who (want) this from Miami Springs have any business in that area and probably don’t patronize these wholesale businesses,” said Ricardo Corona, a property owner in the area the city wants to annex. “We pay for our own garbage pickup, our own security. We maintain our own properties. We don’t have children in school from there.”

Tom Kimen, a lawyer representing business owners in the area, noted that the city might not be equipped to handle the needs of the area.

“Miami Springs doesn’t have any hit track record or history of managing industrial or providing services for industrial,” he said, adding, “I can’t imagine anyone in their right mind who would … choose to pay 374% more for the same or less services.”

Martinez, Monestime and Souto voted “no” for Virginia Gardens. Heyman and Martinez opposed Medley. Martinez was the sole holdout on Doral.

As reported by the Miami Herald, plans for the annexations began back in 2003, when Virginia Gardens applied to annex adjacent land. Officials from Doral, Medley and Miami Springs opposed the move. In an attempt at parity, the county asked the four municipalities to collaborate on a mutually beneficial plan.

It took years to reach an agreement, and even after they did so, they hit another roadblock. In 2013, Miami-Dade Commissioners blocked the plan amid outcry from companies and property owners in the area who complained the annexations would harm their ability to do business and cause their property taxes to skyrocket.

Three years later, the cities began filing new annexation requests with the county. This time, property owners within the area targeted by Miami Springs sued the city and county. The complaint contended that the annexation plan was “improper” because it would create a new enclave, did not seek approval by Miami Springs voters and was largely the same plan proposed in 2013.

The case still awaits resolution; it was put on hold until the County Commission decided on the city’s application.

Despite approving all five annexation items before them, Miami-Dade’s annexation process was a point of consternation for several members of the County Commission.

Sosa said there is a bias against annexations of commercial areas by smaller municipalities like Miami Springs and Virginia Gardens, whose items she sponsored, and characterized opposition over higher taxes as short-sighted.

Regalado recommended adding conditions under which the county could retake an annexed area if a municipality fails to follow through on pre-annexation pledges. She also suggested that a straw vote be held to gauge an area’s support for an annexation when there isn’t a sufficient number or share of voters.

Gilbert said the Commission should wait to vote on annexation matters until county and municipal budgeting processes are underway. At that time, he said, the county would be privy to more concrete proof that a city will honor fiscal promises.

The Doral, Medley, Miami Springs and Virginia Gardens requests represent the last of the county’s backlog in stalled annexation proceedings, said Diaz, the Commission Chair, who sponsored the Medley and Doral items.

They’ll also be the last the Commission will consider under his watch before it overhauls the process, he said.