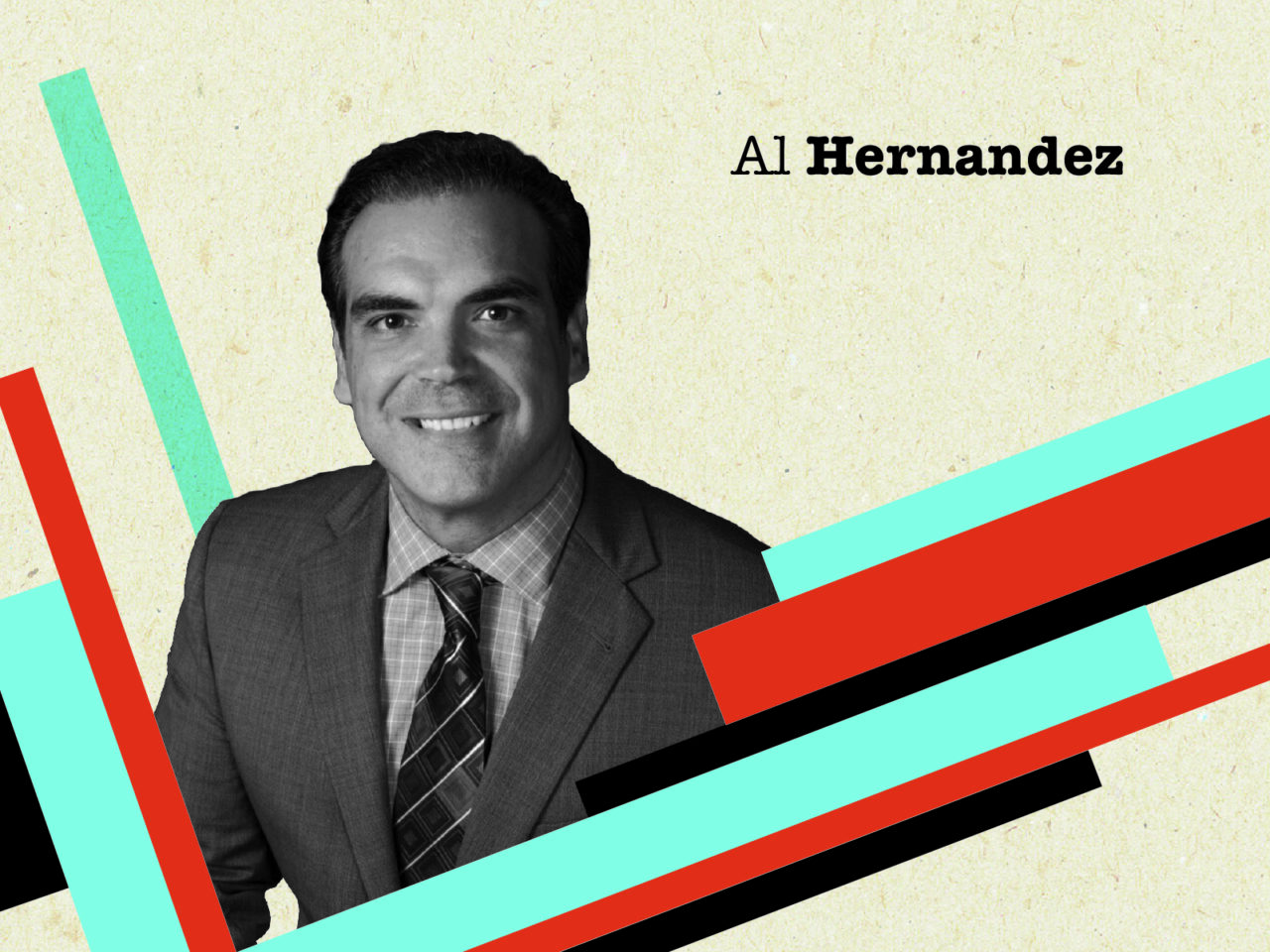 After fleeing Cuba with his family, a teenager thrived thanks to his teachers. Decades later, he would like to pay them back.

In April 1980, 125,000 Cubans climbed aboard boats in the port of Mariel west of Havana. The first of the refugees arrived in Florida the next day. A joint agreement between the two countries allowed for mass migration, which followed a worsening Cuban economy.

That agreement, the Mariel Boatlift, ended six months later. Alvaro Hernandez, a physician who hoped to make it to the U.S. and then send for his family, instead found himself in legal limbo — a political prisoner, his son said.

“We didn’t even see my father for two years,” said Al Hernandez, 50, who is running for Pasco County’s District 1 school board. “At that point, we thought he was dead.”

Fast-forward to the present, in which that former teen is the Florida market vice president for Humana. He is an American success story whose volunteerism includes serving on the Pasco-Hernando State College board of trustees, appointed by Gov. Rick Scott.

Significantly, Hernandez has also found favor with Gov. Ron DeSantis, who in his first few months in office retracted at least 215 appointments Scott made to college boards, trade boards and state commissions but reappointed Hernandez to the PHSC board. More recently, DeSantis included Hernandez among 16 endorsements for school board elections, which are nonpartisan.

“These candidates will ensure our students succeed, protect parental rights in education, and combat the woke agenda from infiltrating public schools at the local school board level,” he said.

Hernandez has also been endorsed by state Rep. Randy Maggard, as well as several large businesses and developers. His campaign echoes priorities the Governor has articulated, including enhanced safety, school choice and parental control over their child’s education, as well as “less politics, and more effective ways to provide high-quality education while also ensuring respect for one another.”

“I am very proud to be endorsed, there is no doubt about it,” Hernandez said. “What I mean by politics is that a lot of times we get too polarized on both sides of the house. At some point, we’ve got to look at the foundation of why we’re doing what we are doing, right? We have to get back to basics.”

The “basics” Hernandez advocates include a more challenging curriculum; school safety; a stronger handle on students’ mental health; early literacy; increased vocational training and financial training; an enforced emphasis on respect for teachers and students; reducing the minimum 2-mile radius before students are eligible for school bus service; and preparing students to compete nationally and internationally.

To accomplish that, the district will need to address an average pay disparity between Pasco employees and those in Hillsborough, Hernando, Pinellas and Manatee counties, Hernandez believes. He supports a property tax referendum on the Aug. 23 primary ballot that would benefit teachers, bus drivers, and other support staff. Currently, Pasco has 300 open teacher positions and 55 for bus drivers, Hernandez said.

“If you follow the budget, you will see that the operational budget does not allow for the increase that is needed ($37 million) to get our teachers in a competitive range,” he said in a text message.

“In the end, the ones that are suffering are the children who do not have the transportation to go to school, or the educators,” he added. “I don’t like taxes, but if you truly believe that children are our future, then as an individual and a resident of this county, I would like to see them succeed.”

Those big-picture priorities and nuanced tone would appear to place Hernandez in a political middle ground between his two opponents, graduation enhancement teacher James Washington, whose supported causes include LGBTQ rights and Black Lives Matter; and aircraft parts manufacturer Steve Meisman, who has pledged to remove what he calls “cultural Marxism” and “woke nonsense” from schools.

Some DeSantis supporters have noticed, and they’re not happy. The Governor spoke recently in Tampa to the national summit of Moms for Liberty, a group of parents who have rallied around such causes as mask mandates and critical race theory. Several attending the speech told the Tampa Bay Times they were disappointed in the Hernandez endorsement.

Hernandez has said he is confident the Governor shares his priorities for the district.

“Look, we’re managing a $1.47 billion enterprise,” he said, referring to the District 1 budget. “We are managing kids from all backgrounds and families, whether they are red, blue, green, yellow — and we’re managing a lot of other things. And the reality is, these are not our kids. These are the parents’ kids. Our responsibility is to be able to give them an education.”

Hernandez credits his own teachers at Miami Senior High with shaping the person he became. “They not only served us, they were mentors,” he said. “They were there for me, and I’ve always kept that in the back of my mind.”

Getting that chance took years and a lot of hardship. The first break was learning that Alvaro Hernandez, who had dreamed of exiting Cuba with his family through Mariel, was alive. By the time the political prisoner was released, the boatlift had ended.

Despite that relief, the reunited family still needed to leave Cuba. That took several more years and the help of Al’s grandparents. Alvaro’s father, himself a former political prisoner, and his wife fled Cuba to the United States in 1978. They sold almost everything to raise the equivalent of $60,000 for the Cuban government, which paid for the family’s transport to Costa Rica, then the United States.

He was 19 when he met Madeline, 17, a daughter of Cuban immigrants and the first to be born in the U.S. “She is my life partner,” he said. “A fantastic mother.”

Hernandez worked his way through Miami-Dade Community College, then Nova Southeastern University, where he earned a business degree and a master’s in international business and finance. Along the way, he installed wooden fencing, cleaned golf carts, worked as a bouncer in front of a nightclub and washed dishes in the back, worked multiple jobs during the day and attended classes at night.

“I don’t have a lot of patience for people who go out and say, ‘I can’t do it,’ or, ‘It’s too hard,’” he said. “Never did. I know it’s feasible. If you have the right drive and the right passion, you can accomplish anything in life.”

He started working for health care providers and insurers in his early twenties, moving up the ranks to his current position as Humana’s Florida market vice president.

Dr. Madeline Hernandez, his wife of 27 years, is now an optometrist in Tampa. A daughter is soon transferring to the University of South Florida with a medical career in mind, and a son is in his second year of law school.

Hernandez enjoys spending whatever free time he has with his family. He is active in his church and other volunteer activities, whether that is stuffing giveaway backpacks with school supplies or something else.

“It’s instilled in me because I didn’t have too much growing up,” he said. “And the more we give back, the more God really blesses us.”

As the election looms, a question has surfaced about Hernandez’s residence. State law requires candidates to live in the district they serve at the time they qualify, and Hernandez bought a house in Zephyrhills in April, after filing paperwork announcing his candidacy.

The rub is that the candidate must live in the district “at the time she or he qualifies.”

The qualifying deadline was noon on June 17. Hernandez has said that he and his wife tried to live in the east Pasco house during renovations, but that multiple delays in getting the work completed made that impossible. The couple returned to their home in Odessa. Hernandez has nonetheless visited the house daily and said he has changed his homestead exemption, driver’s license, voter identification and everything else he can to show compliance.

After reading a news story about Hernandez’s residency, a Land O’ Lakes teacher working as Washington’s campaign manager filed a complaint with the Florida Elections Commission. Jessica Jecusco acknowledged that before filing the complaint she talked briefly with Washington’s wife, with whom she had worked at Gulf High School, a Times story reported.

“This is nothing more than an attack, honestly,” he said. “They don’t have anything. They can’t go on about qualifications, can’t talk about passion, desire or background. So, what do they do? They attack the only thing they can possibly question, and at the end of the day, it’s not true.

“At the end of the day,” Hernandez said, “I have abided by the letter of the law.”