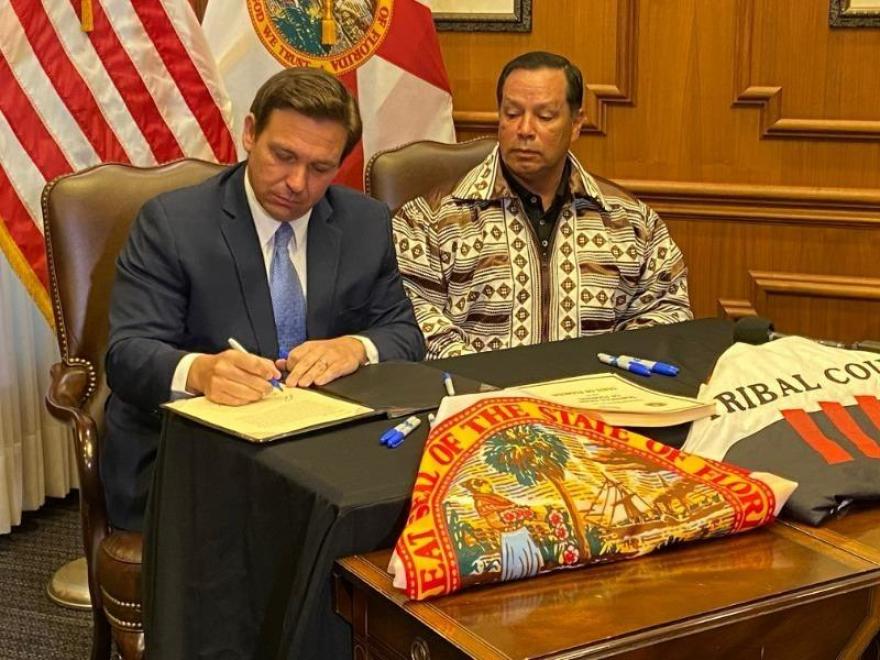 The tribe briefly offered sports betting before the courts forced it to stop.

In a fight over who can control gambling in Florida, the state and the Seminole Tribe of Florida have filed arguments with a federal appellate court defending their five-year, $2.5 billion gambling compact, which would allow sports betting statewide as long as all bets are funneled through computer servers on tribal land.

No Casinos, an anti-gambling organization, which is not a party to this case, plans to file its own amicus brief on behalf of state voters who supported Florida’s Constitution ban on expanding gambling absent a statewide referendum, according to spokesman John Sowinski.

The situation is playing out in Washington, D.C., where District of Columbia District Judge Dabney Friedrich struck down the deal on Nov. 23 and a three-judge panel of the U.S. Court of Appeals for the District of Columbia Circuit refused in early December to interfere. Now the case is back before the D.C. Circuit for a ruling on its merits.

The U.S. Department of the Interior filed its own brief on Aug. 17 asking the appeals court to overturn Friedrich’s ruling, which held that the deal violated the federal Indian Gaming Regulatory Act (IGRA) on the ground that some sports bets would transpire off the Seminoles’ tribal land in Broward County.

But the Seminole Compact doesn’t speak to gambling off tribal lands, the federal brief argues — it merely authorizes typical casino games like roulette, craps, blackjack, and slot machines on Seminole land. The negotiators left the sports-betting component to a state law, passed by the Florida Legislature at the same time it approved the compact, which the state is legally allowed to do under IGRA, the brief adds, and that’s a matter for the state, not federal, courts.

“The legality of any non-Indian land activities discussed in a compact is instead a matter of state law: If the state courts ultimately decide that those activities are not authorized by state law, then those activities will not be permitted, regardless of what the compact contemplates,” the brief says.

“But the secretary [of the Interior] has no duty to predict what the state courts will say about those non-Indian lands activities when deciding whether to approve the compact in the first place.”

Congress passed IGRA after the U.S. Supreme Court ruled in 1987 that states lack the authority to prohibit gambling on Indian reservations. The law provides a framework for states and tribes to negotiate terms for tribal gambling operations.

Gov. Ron DeSantis and tribe chair Marcellus Osceola Jr. signed Florida’s deal in April 2021, ending a years-long disagreement over the status of gambling in the state and allowing the resumption of payments of the state’s share of betting proceeds. The Legislature subsequently approved the compact and Interior Secretary Deb Haaland allowed it to take effect. The tribe briefly offered sports betting before the courts forced it to stop.

West Flagler Associates Ltd. and Bonita-Fort Myers Corp., respectively a casino and a poker room operator, brought the lawsuit that resulted in the appeal.

The Seminole Tribe defended the sports-betting structure in an amicus brief filed last Wednesday. (It had to file such a “friend of the court” brief because Judge Friedrich refused to allow it to participate in the case directly.) Additional tribal gambling associations also have filed amicus briefs supporting the Seminoles.

Supporters have referred to the sports-betting structure as “hub and spoke,” with remote transactions processed through central servers.

Rather than a legal fiction, the tribe argued, key components of these bets would happen on tribal land, notwithstanding that some would be placed via a smartphone or computer many miles distant.

“The gaming software that enables the transactions to occur and accepts players’ wagers is found on servers located on the tribe’s Indian lands,” the brief argues.

“Similarly, Florida, like other states, has enacted numerous laws deeming commercial transactions to occur in one location or another as a matter of law for tax or other purposes. Such laws, like the state law ratifying and implementing the 2021 compact, are common and used to address the practical challenges of regulating commerce occurring in more than one jurisdiction by deeming a transaction to occur in one location or the other as a matter of law,” the tribe argues.

Courts have disfavored similar hub-and-spoke arrangements, the tribe concedes, but only when states haven’t approved them in advance — which is not the situation in Florida, where the Legislature has specifically OK’d the deal.

The tribe contends the trial judge failed to observe the legal principle that gambling compacts must “be construed liberally in favor of the Indians.” That’s because gambling is the key to the tribe’s financial health and ability to run its government and provide services to members and other people who come onto tribal land.

“The gaming industry in the United States is moving inexorably online, particularly with respect to sports betting,” the brief argues.

“The district court’s interpretation of IGRA effectively erects a wall around tribal lands and prevents tribes from keeping pace with online advancements in the gaming industry. Contrary to the district court’s interpretation, nothing in IGRA prevents a state and a tribe from agreeing to allow a tribal casino located on Indian lands to accept wagers from players physically located elsewhere within the state when placement of the wagers is permitted under state law and properly included in a compact.”

Litigators in Florida Attorney General Ashley Moody’s office made similar points in their brief, also filed last Wednesday. They stressed that the federal Indian gambling law allows compacts to control operations that don’t happen in tribal lands — say, using a smartphone to lay a bet — if they’re “directly related to the operation of gaming” on those lands.

“In short, the secretary’s deemed approval was lawful because nothing in IGRA prohibits a compact that governs gaming on Indian lands from also addressing gaming off Indian lands — gaming that is authorized by Florida law, not the compact. Affirming the district court’s reading of IGRA would deny the state and the tribe the massive economic benefits flowing from their agreement and would have considerable nationwide impact.”

Moody’s team acknowledged another issue in dispute: whether 2018’s Amendment 3 to the Florida Constitution requires submitting the compact to approval by the voters. An anti-gambling organization called No Casinos has raised that argument, but the state’s lawyers insist that measure doesn’t apply because the casino games arguably would happen on Indian land — even if remotely via hub and spoke.

That’s where No Casinos comes in. The organization promoted Amendment 3 but isn’t a party to this case. Sowinski, its spokesman, told the Phoenix in a telephone interview that the group’s amicus brief will argue the state and tribe shouldn’t be allowed to expand gambling absent a statewide referendum.

“It’s an intellectually dishonest argument; it is an argument that is an affront to the people of Florida who have the right in their constitution to control what forms of gambling exist outside of tribal lands.