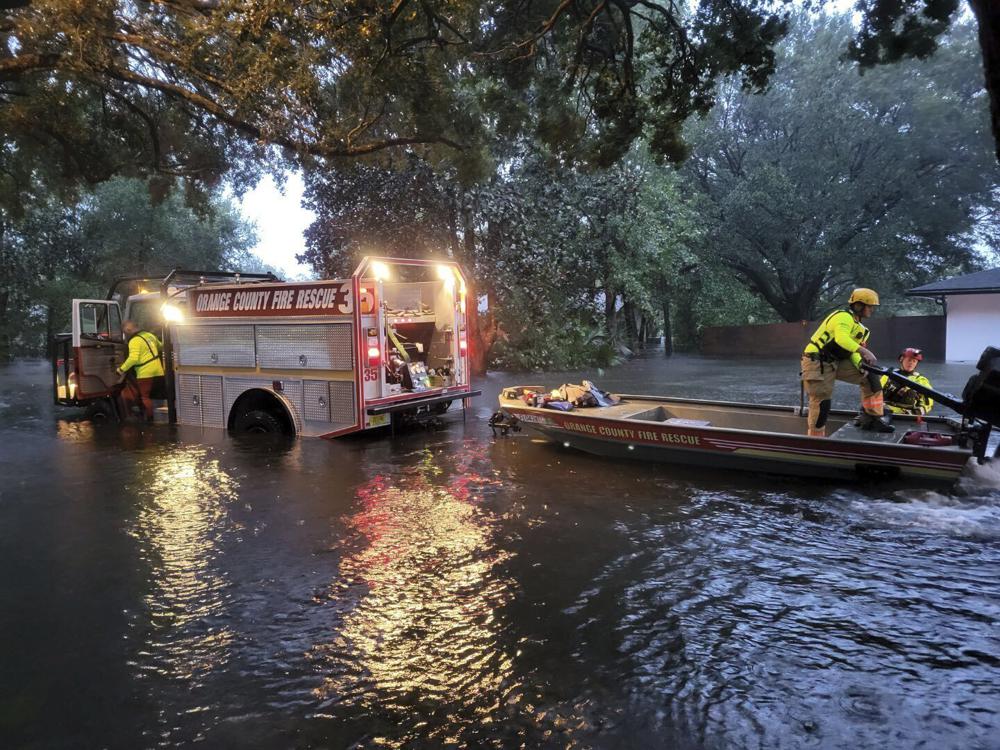 'We’re asking you to simply stay put at this time — stay home, stay off the roadways if you can.'

A 500-year flooding event is no joke — ask the folks in Eastern North Carolina, who a few years ago endured two such events within five years, both caused by tropical cyclones. A spin of the wheel of disaster put Hurricane Ian and its torrent of rain over Central Florida, where residents and officials are trying to get their heads and hands around what Gov. Ron DeSantis called their 500-year-flood catastrophe.

But first, the good news.

“The good news this morning, that the National Weather Service released, is the fact Orange County has now been downgraded to a tropical storm (advisory),” Orange County Mayor Jerry Demings said at the county’s midday news conference Thursday.

The wind speeds were also significantly lower than projected by the time Ian reached Orlando, he said. The storm is expected to clear out of Orange County by 8 p.m. Thursday and take its winds with it by 1 a.m. Friday. Tropical Storm Ian, as the storm was at midday, is a large storm with tropical storm-force winds extending more than 400 miles out from its center.

“The worst of the storm has passed,” he said. “However, we continue to have trees down and roads flooded, with a few power lines down as well. That means that it is not time for our residents to reengage in normal social activities or leave home.

“We’re asking you to simply stay put at this time — stay home, stay off the roadways if you can.”

It could’ve been worse, as 24 inches of rain didn’t materialize, but about a foot of rain did. Average rainfall across the county was 8-12 inches, with 16 inches in some areas. Another one or two inches are predicted before Ian departs.

Some people did need an extra hand as Orange County fire crews and law enforcement helped evacuate around 30 people in the Hope Circle area in Orlo Vista. Officials assisted around 300 people from that area Wednesday to reach shelters where they would be safe until the storm is over.

There are around 200 people with special needs still in Orange County shelters, and 1,300 overall, numbers Demings said will change as the day goes on.

“Orange County Utilities has indicated that they do not have any customers without water at this time, which is good news,” Demings said. The same applies to Orlando Utilities Commission, he added. There were around 200,000 county residents without electricity.

For those who need help through the water, Sheriff John Mina said his office has the resources to assist.

“As you know, we have many high-water vehicles that are at our disposal — boats and other things, so if anyone needs help because of the flooding, please don’t hesitate to reach out,” Mina said. “Our deputies and our first responders are doing, once again in this community, a tremendous job.”

People who work in communities to get people through disasters also live in those communities, which can sometimes be forgotten in the hive of recovery activity.

“We have dispatchers here (at the emergency operations center) sleeping that have worked some long hours,” Mina said. “One I was talking to, she doesn’t even know what kind of damage she has at her home, and I know we have several deputies that had their homes flooded as well, but yet they continue to be out here, helping the people in our community.”

Duke Energy is going about damage assessment before sending in crews to restore power. It’s a process.

“As soon as the conditions are allowable to let us get some of our restoration work underway, we will do that,” said Sally Thelen, communications manager for Duke Energy.

nextNearly a quarter of Florida customers without power after Hurricane Ian