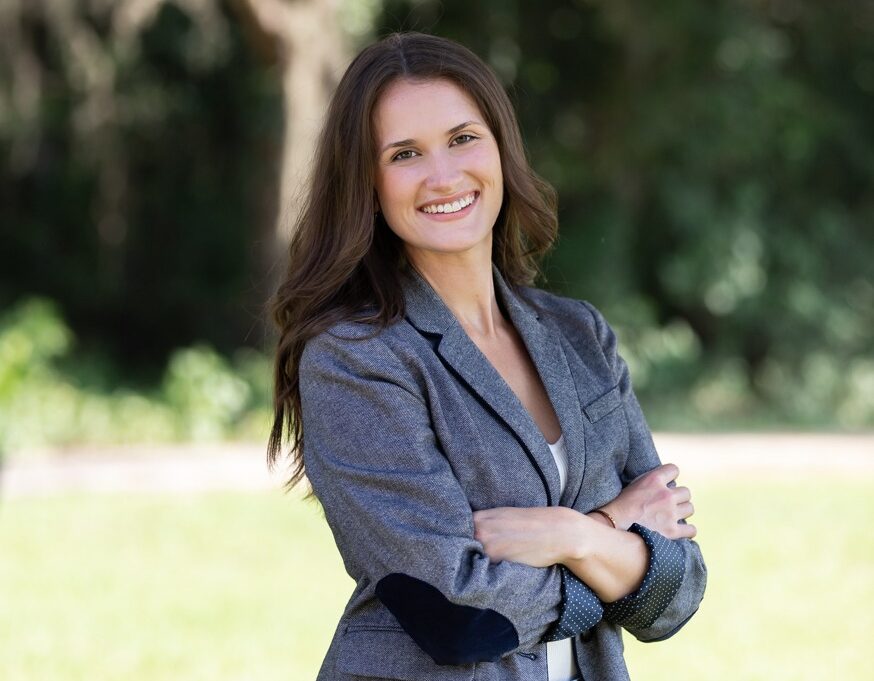 Hannah Crow is defending her fitness to replace Jimbo Jackson.

As Leon County looks for a new Commissioner after the late Jimbo Jackson died from “long COVID,” one candidate is shaking off the specter of pandemic misinformation she once shared on social media.

Hannah Crow, a candidate for County Commission District 2 in Southwest Leon County, has been dogged over her social media history in recent months. Among the conservative positions endorsed in her Twitter likes, Crow has previously liked tweets from November 2020 that encouraged people to flout COVID-19 lockdowns, such as one tweet from conservative radio host Charlie Kirk, or called the pandemic a scam, such as another tweet from conservative activist Candice Owens downplaying Donald Trump Jr.’s COVID-19 diagnosis.

Crow’s Twitter activity appears to have ended in May 2022, just days before Jackson died from long-term consequences of COVID-19, which he caught in the summer of 2020. Now, Crow is defending her fitness to replace the Commissioner in the Special Election for his seat. She has since recanted the beliefs, saying she has “learned” and “grown.”

In a statement to Florida Politics, Crow said her family has several close friends and family members who were devastated by COVID-19.

“This was a tough topic for many people, and I was part of a large group of people searching and following the issue,” Crow said. “Here’s what I believe: I believe vaccines are miracles and that vaccines save lives.”

“Commissioner Jackson’s passing was heartbreaking for our community,” she continued. “We have all done our best to support one another through this process.”

Crow said Jackson had asked her to be part of the Leon County Coronavirus Vaccination Community Education and Engagement Task Force, a project that received $600,000 to increase vaccinations in the area and ran through Dec. 30, 2021.

The candidate shared flyers of two events she promoted on social media. The events — a vaccine drive and a COVID-19 informational breakfast that she says she helped organize and attended — took place in May and September of 2021 in Fort Braden.

“It is unfortunate to me that my opponent knew this information and still chose to push a misrepresentation of my character for personal gain,” Crow said.

Crow, a Republican from Fort Braden, is running against Christian Caban in the nonpartisan race for District 2. Crow obtained the largest vote share, 26%, during the seven-way Primary, and Caban was the second-place vote-getter, with 16%. However, with just two candidates advancing and students back in town in a district with a significant student population, the race is expected to be much closer.

Caban, who, like Crow, has tried to position himself in the political center, has called the messages Crow liked “extreme.”

“People are concerned, and quite frankly, they should be,” Caban said. “This was not a one time mistake. This was an ongoing, year-long COVID misinformation campaign she was spreading all across the district. People are skeptical when she says that she recants those beliefs. I’m not buying it either. This is who she is.”

Caban is a former Republican who registered as a Democrat in September 2021. He says the party moved away from him on issues such as LGBTQ rights and other Democratic values.

Caban has been accused of switching parties to be more palatable to voters in Leon County, a Democratic stronghold. He disputes those claims, noting there was no District 2 race until Jackson’s death.

“There is a reason why the Leon County Democratic Party has endorsed me along with other lifelong Democrats and left-leaning organizations,” Caban said. “I think it’s also extremely important for voters to see this in contrast to my opponent, who is endorsed by the Republican Party. As I was leaving a party due to its direction, my opponent doubled down on her far-right extreme beliefs by amplifying them on Twitter.”

Furthering questions over his party allegiance, Caban donated $2,900 to Nevada Republican U.S. Senate candidate Adam Laxalt in late May, boosting a candidate who could unseat U.S. Sen. Catherine Cortez Masto in a race that could decide the balance of the Senate.

Caban said he was asked to donate “by a friend of a friend” and told the Tallahassee Democrat he donated to Cortez Masto earlier this month after researching Laxalt. Most contributions for the third quarter fundraising period have not yet appeared in the Federal Election Commission’s national donation database, including Caban’s Cortez Masto donation.

Crow, who was among those accusing Caban of switching parties for political purposes, called it “unfortunate” that Caban has tried to make the race partisan and sow division. He has criticized her over her party affiliation and her past positions on vaccines.

“The truth is, there are two Republicans in this race. One came to the table honestly and one is trying their best to sell themselves,” Crow said. “I did not spend the last few years poising myself to run for office. I have spent the last few years on the ground serving the district I call home.”