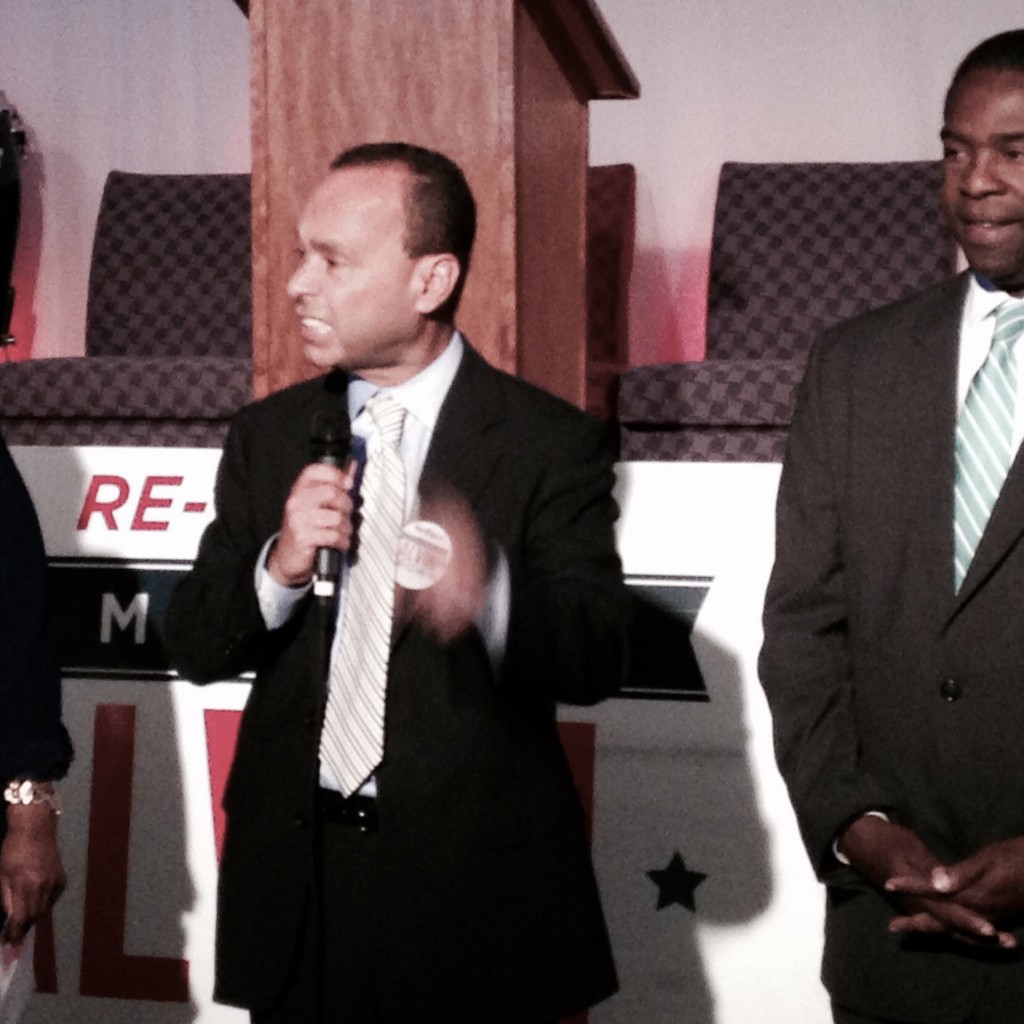 Party unity and outreach to Jacksonville’s burgeoning Hispanic community were the watchwords at an Alvin Brown rally at the Cuba Libre club on Friday afternoon.

An intimate crowd of about 60, including candidates and staff, sampled hors d’oeuvres, sipped drinks, and got to hear the incumbent mayor make his case for re-election while flanked by two powerful congressional Democrats, Reps. Corrine Brown and Luis Gutierrez. Gutierrez, an Illinois Democrat of Puerto Rican descent, stopped through town on the way to an immigration rally in Miami, saying he’ll record robocalls for the mayor’s  campaign.

When asked about the event, the mayor put it in a larger context, saying, “I have always reached out to the Hispanic community.” However, he wouldn’t make a prediction about the Mayweather/Pacquaio fight, to be shown in the club Saturday night.

Friday’s event wasn’t about boxing predictions, of course — though Mayweather in 6 is this reporter’s guess. It was about making the case that Alvin Brown is the right mayoral candidate for the Hispanic community, a demographic the Curry campaign is also pursuing. The Brown campaign’s play is that the rhetoric of social justice delivered in the familiar national Democratic style will make the difference.

The first speaker was the Illinois congressman. He said Jacksonville, though he hasn’t been in town long, is a “wonderful, dynamic city,” and that a lot of the credit goes to the incumbent.

“This mayor’s already cut unemployment in half,” Gutierrez said, creating “jobs for everyone in Jacksonville” regardless of the “color of their skin, making sure that everyone shares in the new wealth.”

Gutierrez made a spirited appeal to vote early, and extolled Congresswoman Brown, before passing the mike to the mayor, who messaged with passion and to the left, alos devoting a many of his remarks to extolling the congresswoman.

“We have a true warrior” in Corrine Brown, Alvin Brown said. “She really delivers … for the district, for Florida, for the United States of America.”

The mayor then made the case that U.S. Representative Brown is, like him, an agent of bipartisan cooperation.

“She works with Republicans and Democrats to make Jacksonville a better place,” the mayor said, calling the congresswoman “one of the best. She works with everyone.”

The mayor then extolled the virtues of a diverse coalition.

“We are stronger because of diversity,” he said. “I have the most diverse administration in city history.” He then led a short call-and-response section with the phrase: “One team. One fight.”

Then, the mayor elaborated more on his admiration for the congresswoman, referring to her as “one person fighting for us” for economic, social, and racial justice.

Speaking next, the congresswoman reciprocated the mayoral admiration.

“Being elected is about serving the community,” Representative Brown said. “I have worked with every mayor in the last 23 years; not one has stepped up like Mayor Alvin Brown.”

Congresswoman Brown reiterated the “one team, one fight” slogan, then delivered one of those classic quotes she’s good for anytime a microphone   is on.

“Elected officials is about two things (and I’m not one of them): whether you vote for them or give them money.”

That was, of course, a quip. She got more serious then talking about Baltimore and the need for her to have a mayor and a sheriff she can work with, and then about the abrupt end of the state Legislative Session: “They collapsed in Tallahassee.” She also predicted the city’s pension deal will pass once the incumbent mayor is re-elected, or at least when new city council members are seated.

A panoply of other candidates spoke briefly, and all of them seemed to be Quick Picks: Ken Jefferson, as well as council hopefuls Joyce Morgan, Ju’Coby Pittman, and George Spencer.

It was an ad hoc event, organized on short notice, so turnout wasn’t as heavy as it might have been with a more robust advance. FloridaPolitics.com was the only media outlet in attendance. Not every Democrat in the runoff was in attendance. Conspicuous in their absences were council candidates Kimberly Daniels and Tommy Hazouri.

Brian Hughes, on behalf of the Curry campaign, cast aspersions on Gutierrez by saying of the event, “Like his out-of-state campaign staff, Alvin decided to bring in an Illinois congressman who is so liberal he’s earned an F from the National Taxpayers Union. The liberal Obamacare team is joining the Clinton machine to rally behind their fellow liberal, Alvin Brown.”