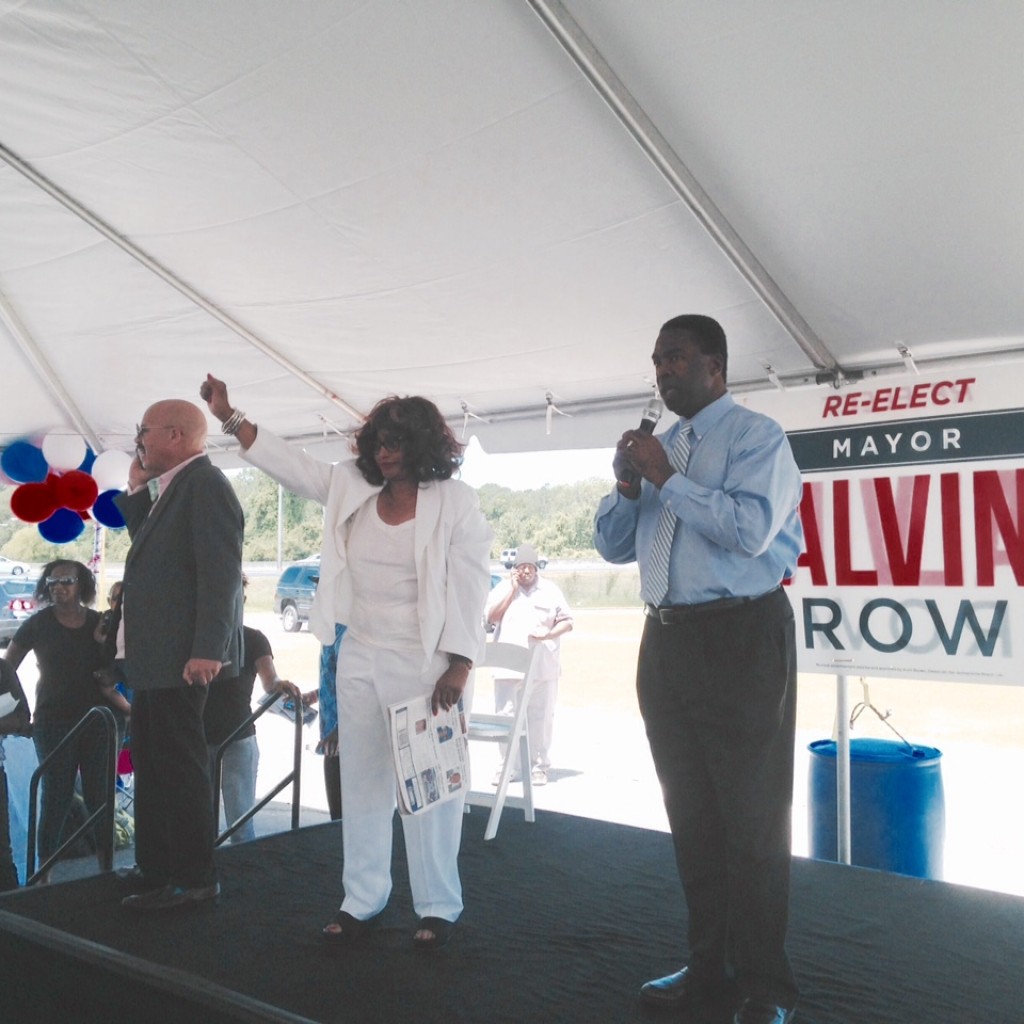 Driving up to the Gateway Supervisor of Elections office across from the Friday lunchtime GOTV party held by the Duval Dems and Mayor Alvin Brown, I was greeted by smiling faces holding out sheets of paper.

Just people handing out Quick Picks and fliers. I got two copies of Corrine’s Quick Picks, a ripoff called the Faith Based and Community Quick Picks for Districts 7 and 8 (the sole difference between the two QPs is that the “faith-based” remix endorses different candidates in those districts), a bunch of fliers, and assurances that my I Voted sticker would get me a barbecue sandwich courtesy of one campaign and a “chicken snack” from the other.

What’s the old proverb? Give a man a fish and you feed him for a day; take him to vote and he eats for a weekend.

I voted (there was no line, and I was the only person in there voting shortly before noon), then made my way to the rally. The DJ wasn’t beatmatching, just fade mixes. But the expected standards were on offer, from “Signed, Sealed, Delivered” to “Ring My Bell” to “More Bounce to the Ounce.” Lunchtime was the right time to be at Gateway, and a couple of hundred people were around at the rally’s peak.

Right now, the early vote trend is Democratic as expected, but not as strong as in the March election. By the morning of the fourth day of early voting, the Democrats had erased the Republican absentee advantage. At 4 p.m. on the afternoon of the fifth day of early voting, Democrats still trail the Republicans in raw turnout by more than 600 votes. A robust turnout at this rally would certainly help the Democrats stack numbers.

For lunchtime on a workday, they did pretty well. The remarks from the speakers were positive and anodyne, with little in the way of money quotes. Tom Joyner, the national radio show host, made a reference to the drama of 2000: “You know how you are in Duval with close elections.”

U.S. Rep. Corrine Brown made her appeal to people to get people out to vote, holding up the Florida Star newspaper, the leading paper in the African-American community, which endorsed Alvin Brown with a color graphic on the front page with the slogan “Our Mayor. Our Time.” (Inside the paper was a list of 36 of the Administration’s 100 Accomplishments, as well as a press release from the Brown campaign declaring victory in the first debate).

Congresswoman Brown called it a “party with a purpose,” and the purpose ultimately is to drive turnout for the mayor’s re-election.

Mayor Brown was in top form, as he talked about the election being in the “crunch time,” before building up a “four more years” call and response, predicated around the tropes of “36,000 more jobs,” “continuing to cut unemployment in half,” and creating “the best Northside that we’ve ever had.”

“Tom Joyner came to Jacksonville to party with a purpose,” he said. “Show him that you know how to do it in DU-VAL.”

Corrine Brown added that Jacksonville doesn’t have a “great reputation” in “close elections,” and that “it’s got to be clear that Alvin Brown is the mayor of Jacksonville” on the night of May 19.

The most memorable thing she did, however, wasn’t speak, but to lead the rally in a spirited version of the Electric Slide. Regrettably, neither the mayor nor his campaign staff joined in.

Mayor Brown has at least two high-profile campaign events this weekend. A Young Professionals Happy Hour with Louisiana U.S. Rep. Cedric Richmond downtown on Friday evening, and a meet and greet with Bill Bishop at Rain Dogs in Five Points.

That gives undecided voters two opportunities to have the mayor buy them drinks.

Seriously, though, it’s clear from these events during the stretch run that the Brown campaign sees its path to victory as involving base turnout and finding a way to draw on the hipster energy it did four years ago, when Brown presented an exciting and visionary alternative to Mike Hogan. The opinion leaders in that group are all in.

The big question is whether they can galvanize the energy and turnout among the Riverside crowd to support Mayor Brown against a candidate who has avoided the many mistakes and miscalculations that led to Hogan’s defeat.

nextRick Scott to hospitals: Come up with profit-sharing ideas by May 22