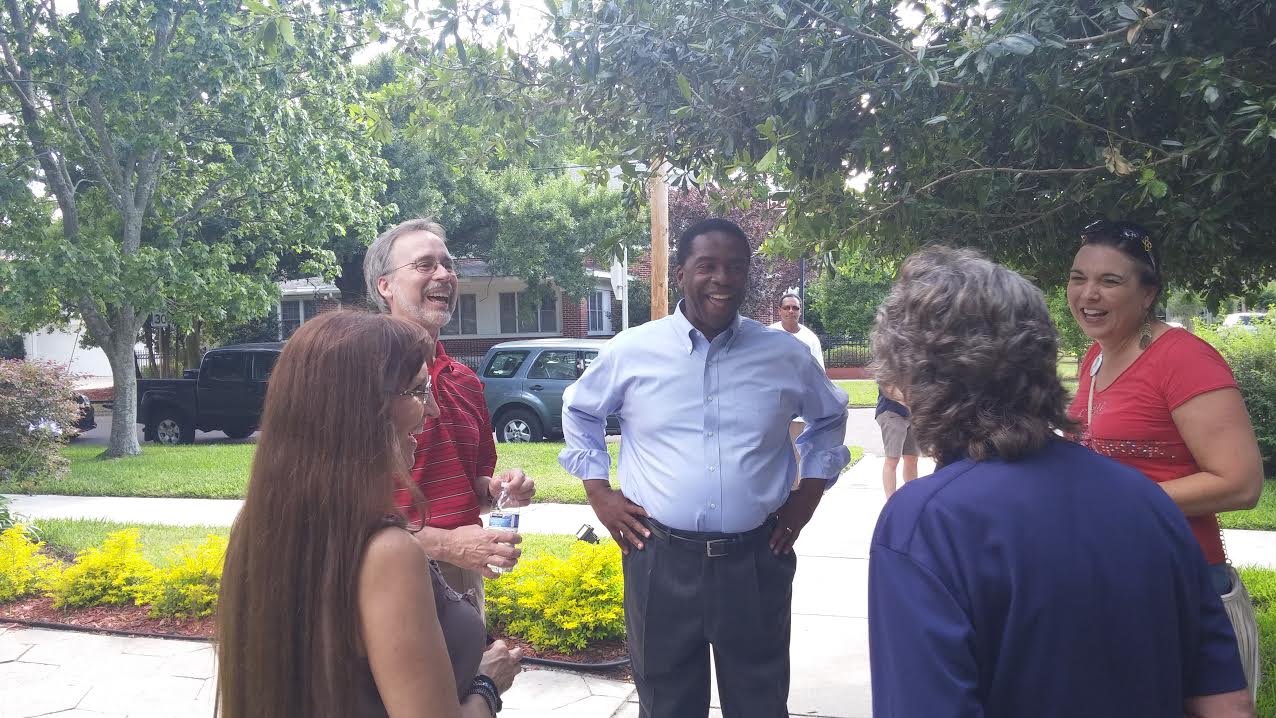 With just ten days left until the May 19th runoff election, Mayor Alvin Brown and his former opponent, Jacksonville City Councilman Bill Bishop, have hit the streets together in the first of several canvassing operations the duo is expected to conduct leading up to Election Day.

During the door-knocking, the two politicians, one Democrat, one Republican, were on the same page in terms of messaging.

“I think it’s extremely valuable to have Councilman Bishop by my side as we go meet with voters and talk about the momentum we’ve established during my first four years in office,” said Brown.

“I’m happy to lend my support,” said Bishop. “As I’ve said before, I think it would be a mistake to change leadership now. The city is going in the right direction.”

Brown and Bishop were on admittedly friendly ground in picking doors along Riverside’s Post and College Streets to knock on. Voters they encountered were uniformly pleased and happy to chat with the pair, with several saying they’d already voted for Brown.

“Many of my supporters in this area have already told me they are very glad I endorsed Mayor Brown instead of Lenny Curry,” Bishop said.

But outside the leafy enclave of Riverside/Avondale, Brown’s path to re-election across right-leaning Duval County is a much narrower one, with polls showing his race against Curry within the margin of error. Sources close to the Brown campaign say they expect a photo finish.

With less than two weeks to go until May 19th, both campaigns are working overtime.

Curry campaign spokesman Brian Hughes pointed out that Curry spent his Saturday not only knocking on doors, but also attending an anti-crime and violence rally and a Republican Party of Duval BBQ GOTV event in Arlington.

“It’s a shame that Bill Bishop, who has opined about negativity in the mayor’s race, is now part of a Brown campaign outreach effort spreading attacks that an African-American Democrat leader has denounced as shameful and divisive,” said Hughes.

Curry and Brown had both sought Bishop’s endorsement after the First Election, where the former City Council President drew 17% of the vote. Bishop continues to deny allegations he sought a quid pro quo from either Brown or Curry in exchange for his support.

After the Riverside canvassing, Brown and Bishop headed to a party for campaign supporters hosted by the new brewpub CASK. There, owner Christina Wagner told FloridaPolitics.com that she was an ardent Bishop supporter in the First Election, but is now happy to throw her support to Brown.

“I can’t stress enough that I was very much in Councilman Bishop’s corner, but now, I think it’s important to continue with the leadership we have,” she said.

Next up: a new Brown campaign ad featuring Bishop’s endorsement. The unanswered question: will Bishop walking neighborhoods with Brown and appearing in TV ads make the difference – or not – in a very close election?