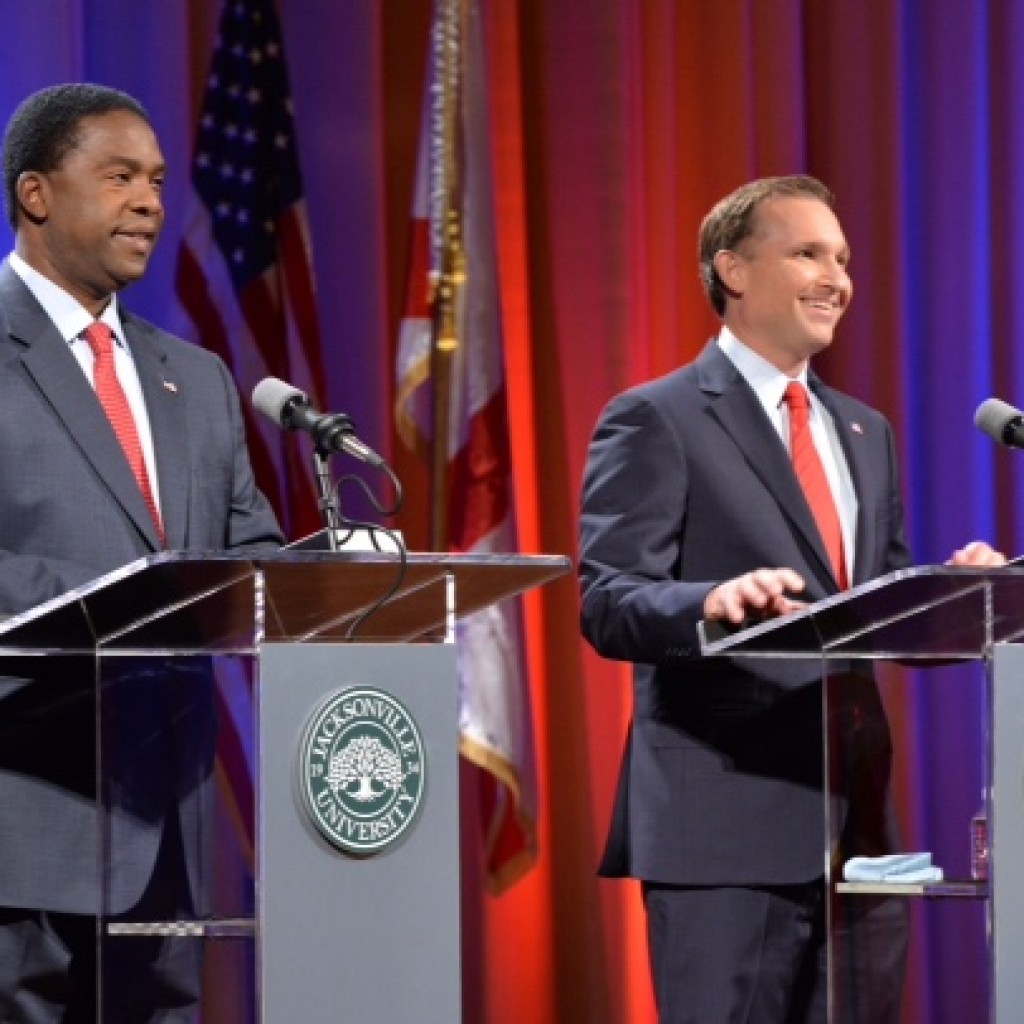 Before the third and final Jacksonville mayoral debate between Lenny Curry and Alvin Brown Thursday, the chants of “Four more years,” reminiscent of the Nixon-Agnew 1972 campaign, rang so loud they could be heard inside the empty Terry Concert Hall, where moderator Kent Justice was doing a run through before the telecast started at 8 p.m..

It seemed that Brown might be able to turn the tide and draw on the crowd energy to score a decisive knockout of Curry. What happened, though, was Brown let Curry control the pace and dynamic of the debate, restricting Brown to messaging that was heavy on the emotional appeal and light on depth or detail beyond the familiar talking points.

The debate kept coming back to crime and public safety. The current crime wave, coupled with the dysfunctional relationship between the sheriff and the mayor, did not help the mayor make his case for “four more years” either.

If these were the final five rounds of a 15-round fight, it should be said that Curry didn’t score a knockout. That said, a TKO is a reasonable argument. Curry controlled the debate, and in an election as tight as this one, that may make the difference with Election Day voters.

From the beginning, it was clear the candidates felt differently. Curry seemed loose, smirking early and often. Brown seemed nervous and defensive, especially before the commercial break. He settled down some after that, but it wasn’t really enough to overcome the initial impression.

In some ways, this was a dialed-down effort compared with previous debates, especially in terms of the ad hominem messaging. Brown put “turn back the clock” on the shelf, though one suspects that meme will resurface in front of friendly partisan crowds soon enough. Curry, meanwhile, made no reference to “race-baiting” ads from the Brown campaign.

While the personal attacks did not surface, Curry repeatedly critiqued the mayor, on issue after issue, and the mayor lacked credible counters. As the first debate in front of a live crowd for this pair, it was expected the mayor would have control of the audience. That wasn’t the case. The crowd was inured to the mayor’s well-worn talking points and emotional appeals, when Brown had to make an affirmative case for his re-election.

That didn’t seem to happen.

The opening statements were a study in contrasts. Curry led with his messaging about the ubiquity of violent crime and murder, messaging that works because of the  daily reminders on local newscasts. Thursday’s instance involved two girls shot on a school bus, which Curry pinpointed as an example of this “real problem.” Drawing on that and his recurrent trope about the half a billion dollars in accounting issues, Curry made the case that his “background and skill” will help to solve Jacksonville’s problems.

Brown’s open made reference to his collaborations with “Democrats, Republicans, and Independents,” extolling those as the reason he has the Bill Bishop endorsement. Then he asked for “four more years to take Jacksonville to the next level.”

The girls shot on the school bus that Curry referred to were the subject of the first question, with Justice quoting DCPS Superintendent Nikolai Vitti, saying the “violence needs to stop” and parents who contend there’s a “war going on in Jacksonville.”

Brown was first up, calling violent crime “heartbreaking,” before launching into a discussion of the “root causes: abject poverty, poor education, and broken homes.” To deal with the violent crime issue, he intends to provide “opportunity for all,” including increasing the minimum wage and promoting equal pay for women.

All are laudable goals, but will viewers follow the implicit connection between root causes and this incident, which shows all the earmarks of the gang warfare that has crept farther south on the Westside in recent months? The suspects are two teenage boys, who probably aren’t worried so much about gender pay equity as they were in settling some score for reasons that JSO ultimately will ascertain.

Staying on that topic, Curry pledged that if he’s elected, “programs like Jacksonville Journey must be funded,” and that prevention and intervention are helped when cops actually have time to get out of their cars and “build trust.”

Brown retorted that the Journey had been cut by $30 million before he even became mayor, and that it’s “the sheriff’s job to enforce the law.”

“The mayor’s never in the game,” Curry said, again, citing the mayor’s penchant for assigning blame to other parties, such as the sheriff and city council. “I will be in the game.”

Brown seemed comfortable with messaging on his fractured relationship with Sheriff John Rutherford, saying, “I’ve encouraged him to hire 80 officers,” but he wouldn’t, so the mayor reached out to the Department of Justice and the League of Cities.

“Four years in, five days out from an election,” Curry said regarding this recent outreach for outside help.

The topics of the budget, the bond downgrade, and the pension issue came up next, and Brown brought up 36,000 new jobs: “Downtown is thriving,” and unemployment cut in half, along with Moody’s and Standard & Poor’s saying that “our finances are strong.”

Curry countered that Jacksonville is in a “financial mess,” with debt that has been downgraded and $500 million of accounting errors. When Brown countered “These errors were not during my administration,” Curry hit his money line again.

“You heard it again. It’s someone else’s problem,” he said, “not the mayor’s fault.”

Curry got the next question, regarding solving the city’s financial problems. Citing his experience with the largest accounting firm in the world, he got off another money line.

“If the city were publicly traded, the stock would crash,” he said, citing the inability to get the requisite information for outside auditors as proof of a larger issue.

From there, the pension deal, defeated on the council floor 9 to 9, became the subject.

“I’m excited about the future of retirement reform,” the mayor said, and blamed partisan politics for defeating the measure that “brought the community together” before council didn’t pass it.

Curry contended that the “pension’s not solved,” and cited the Peyton plan, which would have saved $1 billion over 30 years, as a credible “phase one” on this issue.

“The pension’s not solved four years in,” said Curry, criticizing the mayor as failing to lead on this issue over the course of his term. For his part, Brown countered that council didn’t support the Peyton plan, because, in part, it did not address the unfunded liabilities issue.

The candidates, from there, traded questions. Brown hit Curry on no-showing a lot of Jacksonville Housing Commission meetings from 2008-2012, a rather arcane theme and a meme the campaign has been shopping around for months. Curry responded that he was trying to keep his own business going through the recession. He acknowledged that he was having a hard time getting to all the meetings, but then-Jacksonville Mayor John Peyton wanted him on the commission anyway because of his accounting experience.

Curry then scored one of the three big shots of the debate, when he asked Brown how many times he had met with Sheriff Rutherford in the past year.

“Many times,” the mayor  said, before again reminding viewers that it is Rutherford’s “job to invest in putting officers on the streets,” which presumably exonerates the mayor from any specific recollection of how many meetings the two men have had.

“I pray for this city every day,” the mayor said. “I brought the pastors together with the sheriff.”

“It’s really about the family,” Brown said, as well as increasing the minimum wage, making college affordable, and getting equal pay for women.

“I couldn’t tell you how many times.”

That left yet another opening for “Party Boss Lenny Curry” and his “partisan tricks,” which include pointing out that “things aren’t getting done” when it comes to basic functions of the mayor of a major city, including having a robust and recurrent dialogue with the sheriff.

The topic turned to the UF Health funding shortage. Brown pointed out that he went to Tallahassee to rally for action from his good friend Gov. Rick Scott, and reached out to HHS, to “make sure Jacksonville’s not penalized,” and “met with all the CEOs locally; they support my position.”

Curry pointed out that, should the worst happen, he would call an emergency meeting of the city council and use reserve funds, drawing a contrast between that and the mayor, who wanted to use reserve funds to pay for daily operations.

Curry made a claim in line with that of John Delaney, that the mayor “did nothing” on this issue until the specter of an imminent election forced his hand.

Brown then recommended that Curry go to Tallahassee and find a solution with the people he elected.

The RPOF chairman meme, such a reliable talking point, finally was effectively counter-messaged.

“Yes, I’m a Republican. Yes, I was party chair. You are a Democrat. You were a delegate for Obama,” he said, clearly enjoying the opportunity to remind viewers that Brown was a delegate to the 2012 renomination convention.

When asked about it after the debate, Brown told a reporter that “I don’t know what [Curry’s] referring to.”

The HRO came up again. Curry is still “unconvinced,” but would “lead the discussion,” and after noting that Brown had yet to disclose whether the general counsel’s “thorough review” of laws on the books would extend to LGBT issues, the mayor finally said those words, though without much verve.

The mayor’s supporters have noted that that’s progress on the issue. However, it’s ironic that Curry was able to get the mayor to mention that such issues might exist, given the pressure from activists and straight allies on the issue the past few years.

The two had one more genuinely lively exchange, again over the budget, and Curry got off the line of the night:

“Budget 101: When your spending exceeds your source of revenue, that’s not a balanced budget.”

Many viewers, of course, felt differently about the debate. Many Democratic friends tell Florida Politics that Brown performed masterfully, and in terms of burnishing his new-found progressive bona fides, that’s true. He spoke emotionally about the plight of the city’s poor, of single mothers, of all of those who have been left behind by the booming economy he extols.

That said, he has had three debates to make an affirmative case for his re-election. The critics will hear the new memes and wonder where this guy has been all along. The swing voters, too, for that matter.

It’s a messaging operation that could have beaten Mike Hogan had he run for mayor and made the runoff, certainly. But Lenny Curry is not Mike Hogan.

nextMitch Perry Report for 5.15.15 - Stephanopoulos apologizes again for Clinton donation. Is the story over?