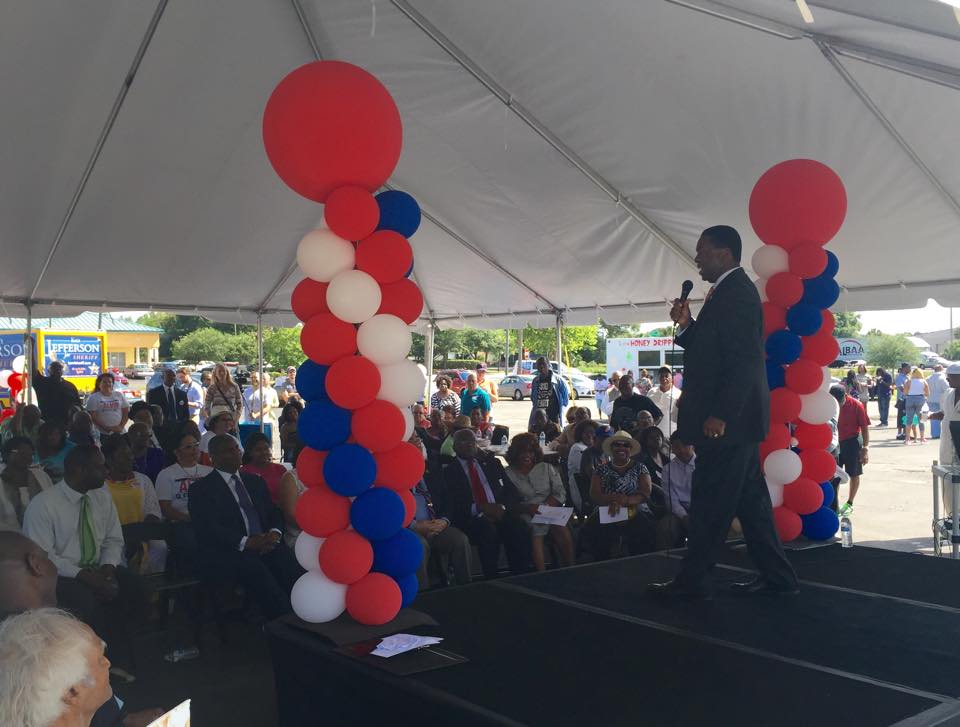 The slogan on billboards across Jacksonville during even-numbered years is Corrine Delivers! If Mayor Alvin Brown wins re-election on Tuesday, he can probably thank U.S. Rep. Corrine Brown for helping to push him over the hump, especially if the Selma Sunday GOTV rally is any indication.

Not every rally leading up to this election has been a huge draw for the Democratic incumbent. But the Selma Sunday event was: It drew hundreds of people, many of whom stayed for hours to support the mayor and to hear national luminaries extol the incumbent mayor’s virtues and excoriate the other side, which would “turn back the clock” in their collective reckoning.

The crowd was thick with Democratic officeholders and would-be officeholders. Councilman Reggie Brown was in the house, along with Ju’Coby Pittman and Katrina Brown. Some of the brightest minds in the local Democratic Party, such as the mastermind behind the Tommy Hazouri campaign, Jenny Busby, were there, along with very upbeat Party Chairman Neil Henrichsen.

The vibe of the event was in many ways, a history lesson, as it would be with civil rights icons such as U.S. Reps. John Lewis and James Clyburn speaking, along with other Congressional Black Caucus members G.K. Butterfield and the aforementioned Congresswoman Brown.

Lewis described the process that got him down to Jacksonville, a process that involved Corrine Brown holding a “sit-in” in his office.

“‘John, you’ve got to come,'” he quoted her as saying. She just sat there until he said yes.

“I couldn’t say no to Corrine.”

For Lewis, the re-election of Alvin Brown is a cause that resonates far past the boundaries of Duval County.

“When Alvin is re-elected, it’s not just good for this city; it’s good for the nation. We cannot go back,” Lewis said.

He related that Representative Brown had taken him to “seven churches today, one twice,” but for him, it was worth it.

“We must win; we can’t afford to lose,” Lewis said, asserting that Jacksonville needs “Alvin Brown, now more than ever” for his “young, strong leadership.”

Congressman Clyburn, like Lewis, had a similar binary morality in his remarks.

“We made significant sacrifices between 1960 and Selma,” Clyburn said. “Everything that’s happened before can happen again.”

He then referred back to the 19th century, comparing the current situation to the aftermath of Reconstruction.

“Laws changed,” Clyburn said. “People began to turn the clock back. Gains were slowly but surely taken away.”

“Four years ago, we demonstrated things could be done.” However, Clyburn cautioned, even as Brown supporters celebrated, “others” were scheming to “turn the clock back.”

“Alvin Brown stands as a symbol,” Clyburn said, “for your children and grandchildren,” and so it is necessary to “keep him there to see what they can be.”

Clyburn handed Butterfield a check, which he said was “enough money to get everyone to the polls.”

The check amount was undisclosed.

“I have worked with him; I have seen him work,” the South Carolina congressman said. “If I had a son, I’d want him to be just like Alvin Brown.

“You ought not to allow those people who want to turn back the clock to win.”

Brown led off with acknowledgements: “pastors and “faith leaders” as well as “volunteers” and “seniors.”

“I’ve been to every senior center,” he said.

“No question in my mind that we’re going to win,” he continued, but “Faith without works is what?”

The crowd, in unison, call and response: “Dead!”

He continued, describing the breakneck pace of the final stretch of this long campaign, saying he had “three more events tonight” and that he was expecting to get “three to four hours of sleep.”

He related that his wife told him, “Don’t kill yourself” campaigning. His response was one of the most stunning Alvin Brown soundbites of his political career:

“I would rather die campaigning than see this city go backwards.”

A telling phrase, surprisingly messianic. The challenge from Lenny Curry has caused Alvin Brown to grow as a politician. Gone is the tentative campaigner who sought to be all things to all people. In his place, a dynamic speaker who may have used his campaign’s rhetoric over recent months to actually move left to where he wanted to be all along.

You will never divorce Alvin Brown from the rhetorical tropes of faith though.

“Mayor, husband, father; I’m also a child of the Kingdom. I want to thank my Lord and Savior Jesus Christ for blessing me to be mayor of Jacksonville.”

Mayor Brown took it to the spiritual plane, and then Representative Brown brought it back down to earth, with zingers for John Rutherford (“I don’t know when the mayor was responsible for law and order: They make it up as they go”) and a call for straight ticket voting on city council races (“with 10 votes we rule Jacksonville”).

“Don’t eat the mayor’s fish and honeydrippers and not vote,” she told the crowd.

It will be interesting to evaluate retrospectively the move the Brown campaign made, in the wake of its “amicable” parting with former spokesman Fabien Levy, in assuming the memes of the national party. They saw the polls in which the path to victory was narrowed if they stayed the course. Yianni Varonis proved to be a strong exponent of the “social justice” memes that Levy couldn’t sell the mayor on going forward with. And yes, the “conservative Democrat” got yoked into the R versus D dynamic the Curry team wanted.

It is very possible that the Curry team can make up that raw vote deficit on Tuesday. What we know is that it’s going to be close. The national media forgot about this race during the past couple of months. Someone needs to remind them: This is the hottest race in the country, and it’s poised for a photo finish on Tuesday night.

And if Alvin wins? Yet again, Corrine delivered. Even though Campaign Manager Isaiah Nelson was key to bringing in Clyburn, and even though Mayor Brown himself was responsible for bringing in New Orleans Mayor Mitch Landrieu, the fact remains that Corrine Brown has played a huge role in keeping the Brown team supplied with national-level surrogates in recent weeks, such as Luis Gutierrez, who came in to do robocalls for Alvin Brown that were targeted to the Hispanic market.