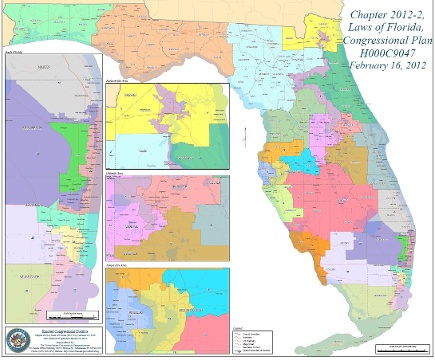 With no official word in yet when the Florida Legislature will reconvene to begin the process of redrawing congressional districts, much of the Tampa Bay area political picture remains fuzzy 13 months from the 2016 primary elections.

Most of the uncertainly resides in Pinellas County, where a newly created CD 13 district is expected to improve the odds of a Democrat taking control of the seat for the first time in generations.

“We’re excited that the courts have taken a strong ruling, 5-2, in favor in making sure that the districts are fairly drawn. That’s good for the people of Pinellas,” says Pinellas County Democratic Executive Chair Susan McGrath.

“We’re preparing for the worst,” admits her GOP counterpart, Pinellas County Republican Executive Committee Chairman Nick DiCeglie, adding that there’s still plenty of legal maneuvering that may take place in the coming months. “It’s somewhat premature to even think that we’re going to lose this or that.”

However, DiCeglie, who like McGrath just took over as Pinellas Chairman last December, says that it’s inevitable that the 13th Congressional District currently controlled by Republican David Jolly is going to contain a lot more Democrats when it’s all said and done, based on the Florida Supreme Court’s ruling that the Florida Legislature must redraw the district for being out of compliance with the Fair Districts constitutional amendments.

The newly formed district reportedly is the key factor in Jolly announcing next week that he will not run for reelection for the seat next year and instead opt to run for U.S. Senate.

DiCeglie spoke to Florida Politics shortly before former St. Petersburg Mayor Rick Baker told SPB’s Peter Schorsch that he is examing running as a Republican in the newly formed CD 13 next year. The REC chair says a Baker candidacy would excite him and many other Republicans in the district if the former mayor were to pull the trigger.

“I think the world of Mayor Baker, ” said DeCeglie. “He has just an incredible track record in St Petersburg, he has deep roots there, and I would be very confident that he would be a credible candidate for that seat if of course he decides to to make that move.”

Rumors continue to circulate that former Governor Charlie Crist, a St. Pete native who still lives in the ‘Burg, is seriously considering running for the Democratic nomination for Congress as well in CD 13.

McGrath has yet to speak with Crist to gage his interest, but has read the media reports indicating that he is considering a run for the seat, less than a year after narrowly losing a bid for governor.

36-year-old Eric Lynn is the only declared Democrat in the race. The former Defense Department official in the Obama administration has been running for months, and has announced that he has raised $400,000 already in his bid to win the congressional seat. No other Democrat has entered the contest, and probably won’t until Crist makes up his mind.

However, it appears inevitable that however it shakes out, Lynn will have a formidable challenger in a Democratic Primary next year. McGrath says that’s all hypothetical at this point, and not worth worrying about.

“We have a district that’s going to be more fair to the families in Pinellas County,” she says. “We have a declared candidate who’s doing well, getting a good amount of money, getting grass roots support from people across Pinellas, and we’re excited about that.”

McGrath says playing a chess game of who or who may not get involved is premature at this point. “The reality of it is that this is a district that will be more fairly represented. It will not be gerrymandered. The court’s going to ensure that the maps are fairly drawn, so that people have a real opportunity to represent Pinellas County families. We have a have a candidate who is resonating with the people of Pinellas County. So, we’re in a great spot, and we’re very excited about the opportunity.”

Meanwhile in Hillsborough County, officials don’t expect too much of a shakeup, even with Kathy Castor’s CD 14 seat being redrawn, as per the Supreme Court’s orders.

Although Castor’s portion of the district encompasses much of Hillsborough County, she’s one of four lawmakers who represents a part of the county. Gus Bilirakis, Dennis Ross and Tom Rooney also share their own specific pieces of Hillsborough the in 1.2 million populated county.

Republican Party chair Deborah Tamargo says it’s time to move on and accept the Court’s orders, but calls it hypocritical that the Dems cried foul after the 2011 redistricting.

“What I find ironic is that the Legislative bodies in the state have always drawn the lines, and there never was any objection to when the Democrats were in control, and we won under their lines, we picked up seats every year until we became in control, and then all of a sudden it became an unfair process,” she complains.

When then House Speaker Will Weatherford and Senate President Don Gaetz came to Tampa in 2011 as part of the statewide public hearings on redistricting, both Democrats and Republicans pled with them to not draw the CD 14 seat across Tampa Bay into Pinellas County. They did, and were slapped down by the Supreme Court for doing so last week.

Hillsborough County GOP Chair Deborah Tamargo says that more compact districts are preferable. “It’s so much easier to interact with your legislators,” she says. “Whether it’s at the congressional level or the state level when it’s more compact. So I think you’re more accountable to the voters. Going across the Bay was a stretch. “