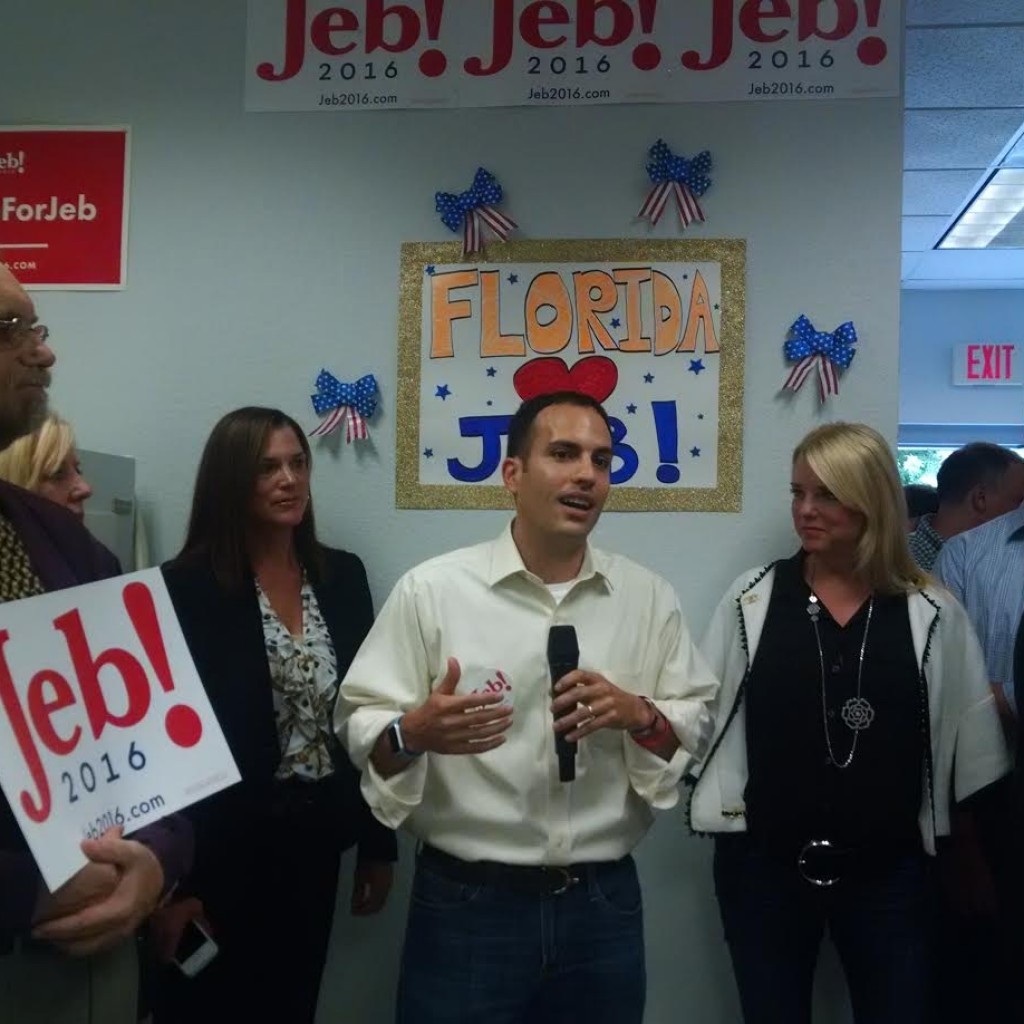 Jeb Bush may be struggling in the polls, but there was nothing but unadulterated love for him shown Thursday afternoon in Tampa, where a bevy of local and state Republicans – highlighted by an appearance by Jeb Bush Jr. – gathered to officially open the former Florida governor’s statewide headquarters.

Located in the Town ‘n’ Country section in Northwest Tampa off West Hillsborough Avenue, supporters crammed into a stuffy kitchen area to await the appearance of Bush Jr., the 31-year-old scion now part of the official campaign.

Former state House Speaker Will Weatherford led the crowded room into a chant of “Jeb! Jeb! Jeb!,” as he and Florida Attorney General Pam Bondi extolled the virtues of Bush Sr., who has the support of most of the Florida political establishment – past and present – at the moment.

Earlier in the day, the Bush campaign released a fresh batch of endorsements,  which included several former House Speakers. Along with Weatherford, former U.S. Rep. and current Associated Industries of Florida CEO Tom Feeney was on the list, as well as Allen Bense, Dean Cannon, Larry Cretul and current House Speaker Steve Crisafulli.

Despite Bush’s lackluster poll numbers (a CNN national poll released on Thursday has Bush with 9 percent support, well behind Donald Trump and Ben Carson), the Republicans on hand all say it’s way too early to count their man out.

“Governor Bush is a steady politician, a steady campaigner and he has time to get his record out,”  Galvano said. “That’s what’s going to differentiate him from Donald Trump and the rest of the pack. This is a man that wants everyone to fully understand how wonderfully he performed in Florida, and how practical he was in finding solutions, and how detail oriented he is. That’s the message that’s going to carry the day.”

“It’s very early, and now we’re running away with emotion, of new things that are being said and some folks are getting excited,” said E.J. Otero, a retired Air Force officer and GOP congressional candidate against Kathy Castor in 2012.”Governor Bush has a very clear understanding of where we are. He is appealing across the board to the citizens on immigration, foreign policy, and military issues.”

“It’s summertime,” Hillsborough County Republican Executive Committee Chair Deb Tamargo said.”The campaigns don’t begin until January.” She said that Trump is hitting the pent-up emotions of voters across the country, but thinks that the electorate isn’t really focused now as they will be by the time 2016 arrives and Iowa and New Hampshire are around the corner.

History bears out the notion that who’s leading in early September in a GOP primary isn’t predictive of who will be come the nominee. On Oct. 11, 2011, Herman Cain led the GOP field in an NBC News/Wall Street Journal national poll with 27 percent support to eventual nominee Mitt Romney‘s 23 percent. Rick Perry was in third with 16 percent.

The Bush campaign’s national headquarters are located in Miami. On Saturday, they will open up a second satellite office in his hometown.

nextCatherine Durkin Robinson: 20 things you can do besides send hate mail, make death threats, and freak out in Publix