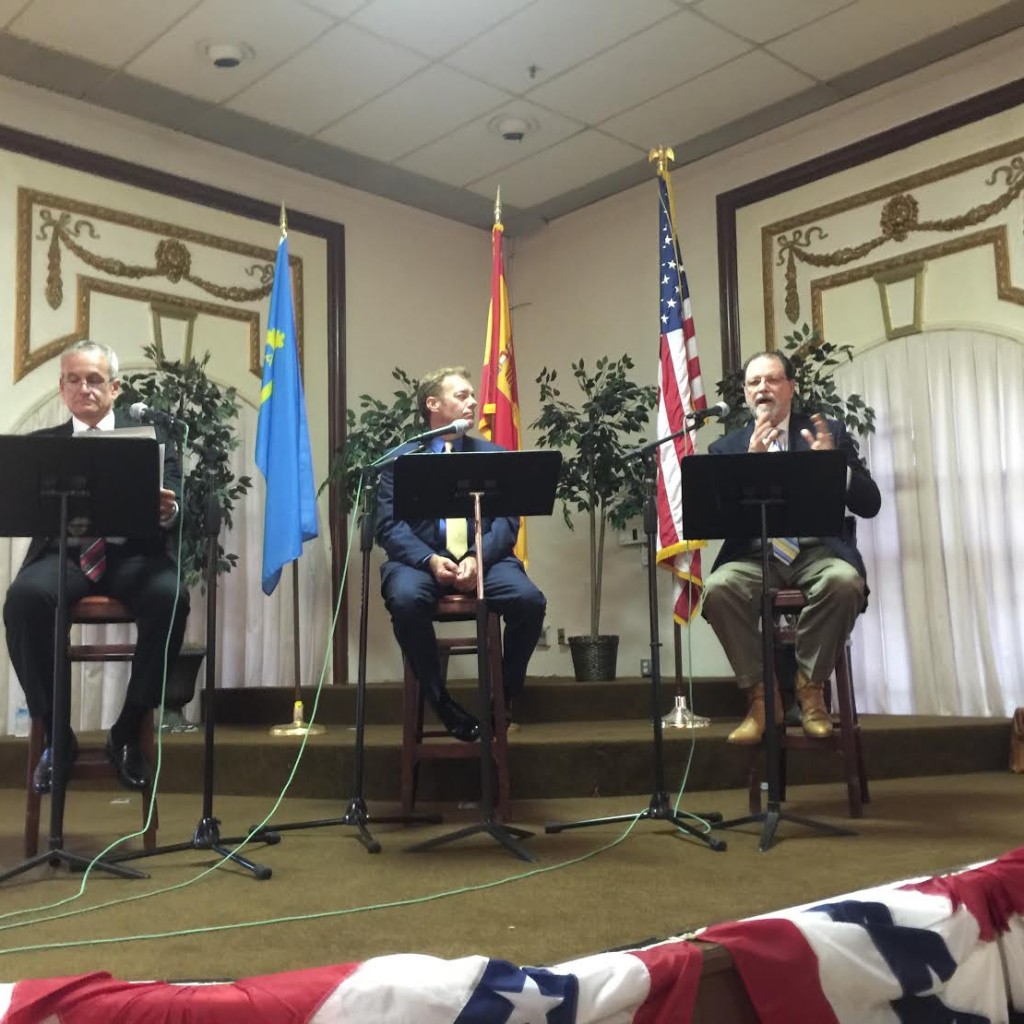 It was billed as “The Great Debate” with two of the most prominent Tampa residents on the issue of Cuba, Al Fox and Ralph Fernandez, duking it out on whether the United States should end the 54-year-old economic embargo against the Castro-led government.

Hundreds jammed into the historic Centro Asturiano building in Ybor City for a 90-minute forum hosted by the Tampa Tiger Bay Club on Monday night, and judging by the laughs alone, were thoroughly entertained by these two passionate advocates when it comes to Cuba.

The 63-year-old Fernandez was born in Cuba but moved to Tampa in 1961 at the age of 8, and has long been the man when local or national media want a hit from an anti-Castro perspective in Tampa. He’s defended a number of Cuban dissidents in the United States.

While for years, Fox was a lonely voice in Tampa in advocating for business and political leaders to get active in reestablishing relations with the Cuban government.

And though they frequently clashed during the debate, there were several issues when the men realized they were on the same page, such as in opposing the decades-old “wet foot, dry foot” immigration policy with Cubans.

“No one addresses the Cuban exemption,” barked Fernandez. “And it serves a lot of people. And it risks lives, and more than that it creates a draw for people to come to this country and engage in the grow house businesses and the clinic businesses and the tax of our businesses and rape the system as a whole!”

They also agreed that for national security reasons, the U.S. government should not give up the Guantanamo naval base. That’s significant, as Cuban President Raul Castro has said that the U.S. must return the property before the two nations can fully restore relations. “Raul Castro can put that on the table all he wants to,” said Fox. “We’re not going to give it up, certainly not anytime soon.”

But there were some moments of tension, such as when Fox referred to the fact that when he ran for Congress in Hillsborough County in 2006, Fernandez printed signs that read,”Give Fidel Castro a voice in the U.S. Congress: Vote Al Fox.”

“That was below the belt, I thought,” said Fox. “But you seem tonight to be somewhat moderating your strident, in-your-face positions, and I gotta tell you that in the spirit of Dr. [Martin Luther] King and Jose Marti, I truly welcome it. I really do.”

“It is true that I said some things which I felt were true that I do not regret,” Fernandez replied. “It is true that he has been lightning-rod for criticism. It is true that he was not successful until now, and he took great pride today in indicating in the Tribune article that he had won,” referring to how the debate– at least in Tampa, seems to be decisively in support of the rapprochement with the Communist island. “But I think he understands, as many, that what we’re trying to do is analyze the Cuban situation and see how we can avoid the mistakes that this country made in the past, so that we don’t make ’em again in the future.”

Fox lived and worked in Washington, D.C., for 41 years, and cited the Beltway in terms of personal/political feuds. “In Washington you have professional assholes. We’re amateurs down here,” eliciting large guffaws.

In their concluding remarks, Fernandez addressed a topic that neither moderator Jeff Patterson from WFLA-News Channel 8, nor the three media representatives — La Gaceta’s Patrick Manteiga, The Tampa Tribune’s Paul Guzzo, and yours truly — had addressed: the idea of a Tampa hosting a Cuban consulate.

“I don’t think it’s a good idea,” Fernandez said. “It would bring conflict to this area, and there may be a reaction from people that you would understand.”

Although the majority of the Tampa political and business establishment is supportive of Fox’s efforts to renew relations with Cuba, Tampa Mayor Bob Buckhorn remains resolutely off-board. The mayor has said he’s neutral in the discussion over bringing a consulate to Tampa, but Fox says the mayor needs to come around.

Citing a newspaper story that quoted Buckhorn saying that out of respect for Cuban exiles living in Tampa who disdain the Castro regime he would continue to oppose greater relations with Cuba. “The mayor is wrong, he’s not providing any leadership,” he said.

Sometimes Fox and Fernandez failed to answer direct questions, as they were intent on responding to what the previous speaker had said. At times Patterson seemed ready to just throw his hands up in resignation. Afterwards, Fernandez thanked the time-keepers (Tiger Bay Club officers Don Kruse and Gregory Wilson) for being the stars of the evening.

Fox also said he’s been persecuted for political views, citing his DUI arrest in 2013 where his blood alcohol level was tested at 0.0. (Fox went to jail, but prosecutors declined to pursue the charge given the lack of evidence. He then sued the department). He also said the U.S. Treasury Department sent him a letter earlier this year saying that he’s been fined over $1 million.

Both men say they’ll keep on pushing their points of view.

previousEating Sweets Can Actually be Good for You - Here is Why