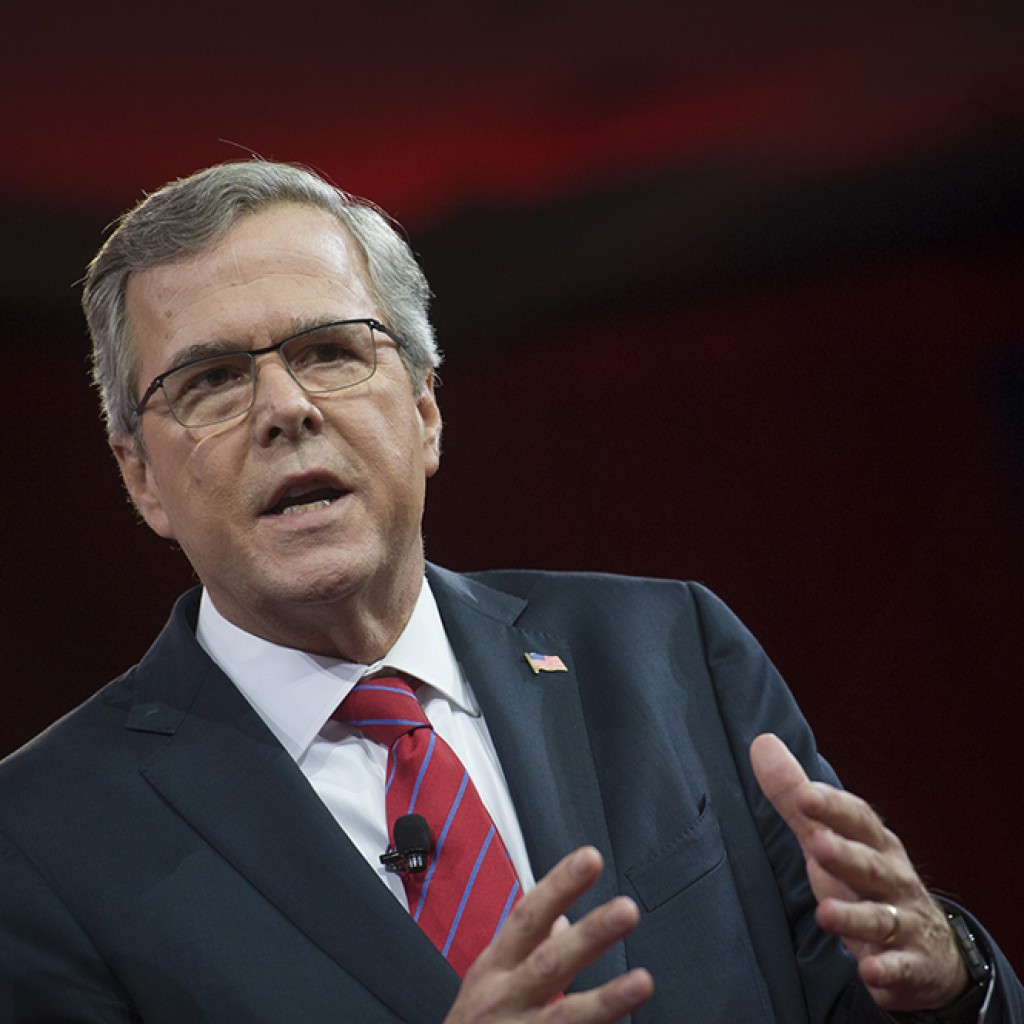 After initially struggling with questions about the Iraq War and his brother’s tenure as the nation’s leader, Jeb Bush has tossed aside any hesitations about embracing former President George W. Bush’s legacy and is searching for new ways to incorporate him into his White House campaign.

It’s a shift due in no small part to the jabs of Republican front-runner Donald Trump, who isn’t backing down from his assertions that Bush’s brother bears some responsibility for 9/11.

“In the latest episode of the reality show that is Donald Trump’s campaign, he has blamed my brother for the 9/11 terrorist attacks on our nation,” Bush wrote in a column published Tuesday in National Review. “That Trump echoes the attacks of Michael Moore and the fringe left against my brother is yet another example of his dangerous views on national-security issues.”

Spurred on by Trump, Bush is showing none of the hesitation in embracing his brother’s presidency that tripped him up in the weeks leading to the formal launch of his 2016 campaign. Jeb Bush fumbled answers to questions about his brother’s decision to invade Iraq in 2003 for an entire week in May, struggling to explain whether he would have done the same.

Bush is on much more comfortable ground when it comes to his brother’s response to 9/11.

“The simple fact is that when we were attacked, my brother created an environment where, for 2,600 days, we were safe,” Bush said Monday night on Fox News. “No one attacked us again. And he changed the laws, he did everything necessary, he united the country, and he kept us safe.”

The back and forth between the two candidates began at the second Republican debate, when Bush defended his brother as a president who kept the nation safe after the billionaire businessman claimed George W. Bush’s presidency “gave us Barack Obama, because it was such a disaster.”

While George W. Bush’s favorability among all Americans remains mixed, nearly three-quarters of Republicans have a favorable view of him, according to a Pew Research poll in May. Jeb Bush scored his biggest applause of the evening when he pivoted to his right to face Trump and said calmly, “As it relates to my brother, there’s one thing I know for sure. He kept us safe.”

The debate hall at the Ronald Reagan Presidential Library erupted in applause, and the comment has since become a part of the former Florida governor’s campaign stump speech.

“The reaction to Donald Trump’s remarks show that no one accepts them,” said longtime Bush supporter and donor Al Hoffman. “Jeb isn’t afraid, and what he’s saying is we’re brothers and we’re going to support each other.”

Yet Trump shows no signs of slowing his ridicule of Bush’s applause line. On Monday, he tweeted links to stories about pre-9/11 intelligence failures and continued to talk it up Tuesday in a pair of television interviews.

In the past week, George W. Bush has written two emails to supporters asking for donations, and the campaign is using his name to appeal to donors, including one Sunday where Jeb Bush asks supporters to “help me defend my brother against Trump’s comments.”

Former President George W. Bush, as well as the brothers’ father former President George H. W. Bush and their mother, Barbara, plan to attend a Jeb Bush campaign donor conference in Houston this weekend. The elder Bush brother will also headline a fundraiser next Thursday, the invitation sent by two of his chiefs of staff while in office.

Meanwhile, Bush’s 2016 presidential campaign is looking anew at how best to build on the positive response the former president’s name has invoked. Voters, specifically those who identify fighting terrorism as a top priority, continue to view the former president favorably, said Bush campaign spokesman Tim Miller.