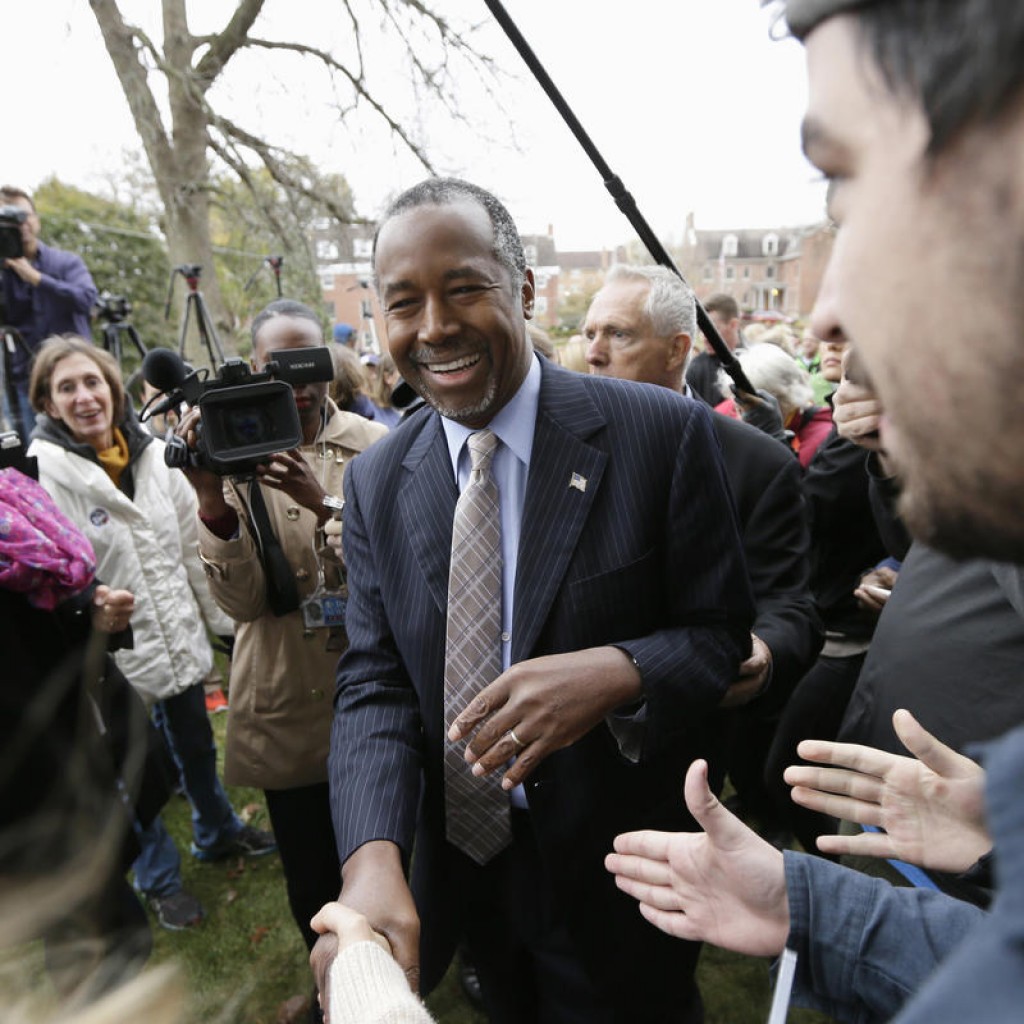 On the eve of his party’s third debate, Republican presidential candidate Ben Carson promised not to curb his penchant for using extreme examples to prove his points, such as equating abortion with slavery and comparing Islamic State fighters to patriots of the American Revolution.

“I don’t buy the PC stuf. I just don’t buy it,” Carson said in a Tuesday interview with The Associated Press. He said the country can discuss complicated issues as adults, and he suggested people could learn from his example.

“One of my goals is to get us to mature as a society,” he said. “We should be mature enough to be able to talk about things without going into a tizzy.”

To date, Carson’s style has not affected his climb through the GOP’s ranks to challenge Donald Trump as a front-runner for the Republican nomination. Indeed, many conservatives embrace the unvarnished approach of the retired neurosurgeon who has never before run for office.

Yet Carson’s own advisers worry the rhetorical grenades may complicate his ability to go far in the competitive and still unsettled Republican field.

Beyond his outsider status, Carson’s appeal comes largely from his identity as a mild-mannered physician with a measured approach to the rough-and-tumble of politics. Regular references to Nazis and slavery, his advisers suggest, could threaten to obscure his larger message as a man with the temperament to quell the acrimony of Washington.

“It is not a (deliberate) strategy,” said Carson’s communications director, Doug Watts, pointing specifically to Carson’s decision to use the Holocaust as a way to illustrate why the U.S. shouldn’t enact tougher gun restrictions.

“The Nazis may not be the most perfect comparison,” Watts said. “We’ve spoken to him several times and said, ‘You can find better examples,’ and he understands that.”

Yet a few minutes later, in the interview with AP, Carson again argued against gun control by referencing the Nazis and repeated his recent comments about abortion and slavery.

“What happened in Nazi Germany can never happen again unless we forget it, unless we won’t talk about it,” Carson said.

He noted that he first linked abortion and slavery two decades ago, as part of his shift from supporting abortion rights to opposing abortion in virtually all cases.

The only major black candidate in the 2016 field of either party, Carson recounted Tuesday how two of his ancestors, brother and sister, were separated by different slave owners.

“It always makes me tear up a little bit when I think about what people had to go through,” he said.

“I was never pro-abortion, but I was pro-choice,” he said. “I felt that even though I didn’t believe in it, I didn’t really have the right to say what anybody else did. And the thing that really changed my mind about that was thinking … that if the abolitionists said that, said, ‘Well, I don’t believe in slavery, but everybody else can do whatever they want,’ I think maybe we may still have slavery.”

Carson also often uses extreme moments from his own life when talking with voters, including stories about his violent upbringing in inner-city Detroit. At a public event Tuesday to accept the endorsement of cage fighter Vitor Belfort, Carson said his temper as a teenager prompted him to try “to stab another teenager” years ago.

“By the grace of God, he had on a large metal buckle … and the knife blade struck it and broke,” Carson said. “It shows you how God, he took a knife that I was trying to kill somebody with, and he gave me a knife to save lives.”

Carson’s place in preference polls hasn’t been affected negatively by his statements that he would not support electing a Muslim as president, his equating the passion of Islamic State militants in the Middle East to that of America’s Revolutionary War soldiers, and suggesting that prison terms lead some inmates to choose homosexuality.

Even as he spent subsequent days explaining each remark, his fundraising and polls numbers often improved.

“Dr. Carson isn’t bound by having to say what you think you have to say, and that’s refreshing,” supporter Rick Chaffin, a 60-year-old Air Force retiree, said recently at one of the candidate’s book signings in Georgia.

Matt Strawn, a former Iowa Republican Party chairman, pointed to Carson’s months of outreach in the first caucus state. “Iowa caucus-goers really feel they know who Ben Carson is as a man,” he said, “which may help explain why these kind of headline-grabbing statements aren’t really having a negative effect.”

Watts, the Carson aide, said that for all the staff concerns, the candidate’s preparations for the Wednesday debate have not included instructions on avoiding references to slavery or Nazis.

“He’ll find his equilibrium,” Watts said. “That I’m sure.”

The candidate, meanwhile, said he has no qualms about taking the stage as a front-runner alongside Trump: “I relish it.”

previousPlaintiffs now say they're filing their own Senate district map