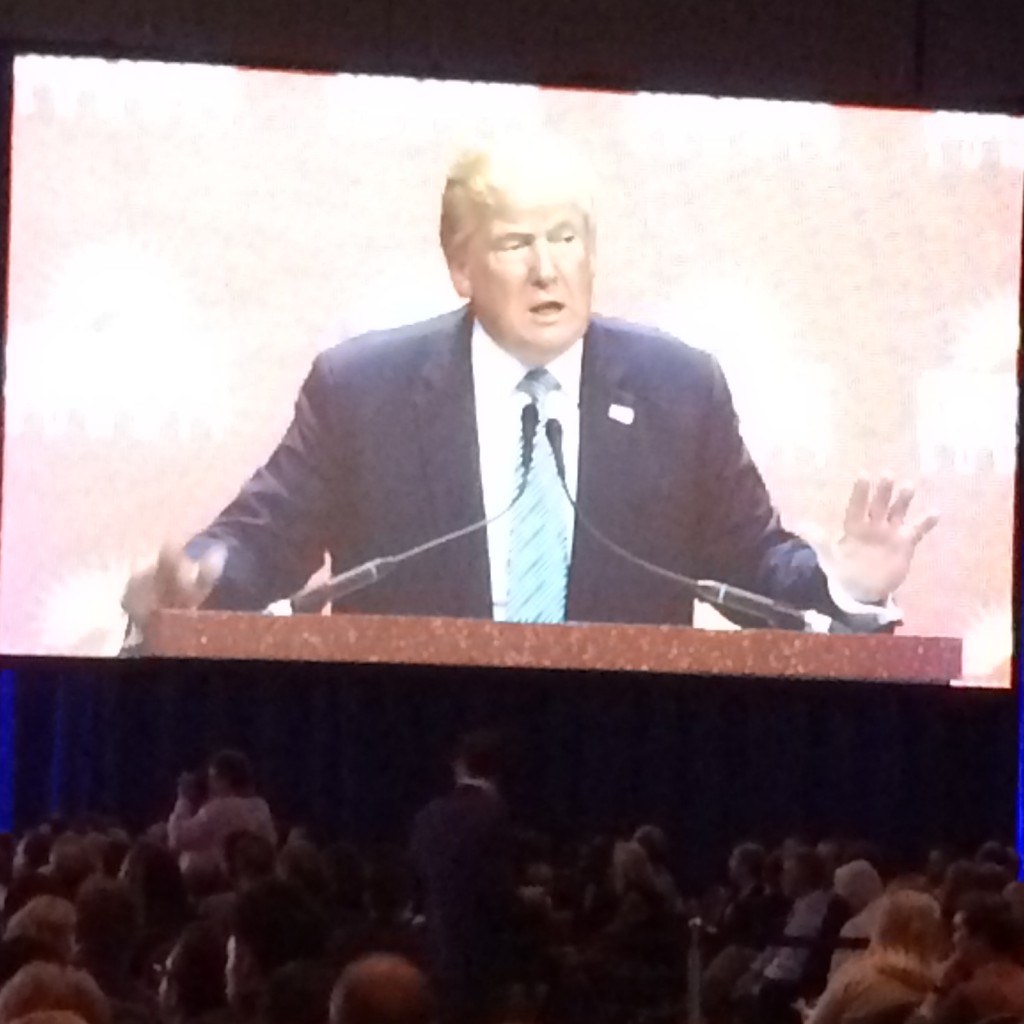 Coming off perhaps his most controversial speech yet in his run for the Republican nomination, Donald Trump delivered a relatively tame address in Orlando late Friday afternoon that addressed many of the major themes that have put him atop the polls.

He began by reciting his poll numbers, listing a new Reuters poll that had him up 14 points over Dr. Ben Carson, 34-20 percent.

He then segued how he had just been speaking to a couple of national news anchors who were saying he had been prescient in calling for the U.S. to bomb ISIS for their oil. For the past 24 hours the military has begun to bomb ISIS-controlled oil fields in Syria. He then cited how he had referred to the menace of Osama bin Laden in his 2000 book, “The America We Deserve,” a year before the 9/11 attacks.

Trump made no mention of his Thursday night remarks in Fort Dodge, Iowa, when the New York City real estate mogul verbally carpet bombed Carson repeatedly, said Hillary Clinton is playing the “women’s card big league,” ridiculed Marco Rubio as “weak like a baby,” and vowed to “bomb the s— out of (ISIS).”

He also seemed to violate a most basic principle in politics — criticizing the voters — when he bashed Iowan’s for supporting Carson in the polls, where the retired pediatric neurosurgeon is either leading or tied with Trump in the Hawkeye State.

That remark came when questioning Carson’s claim from childhood that he tried to stab someone as a child but the person’s belt buckle prevented injury. Carson says the incident helped turn him to the Christian faith.

Reporters hoping to ask him about those comments were disappointed though when after waiting for about 10 minutes for him to appear for a press availability, a spokesman for the Republican Party of Florida said that he would not be appearing before reporters.

Trump has been talking up former President Dwight Eisenhower this week in talking about how he could successfully deport millions of undocumented Americans. That led him to do an extended riff that makes his news conferences so entertaining.

Trump then said he’d build a military so strong and tough that “nobody’s ever going to mess with us, folks. Nobody.”

On immigration, Trump said that he had somehow been proven right when saying that he would be able to get rid of so-called “anchor babies.”

“Turned out that I was right about the anchor babies,” denying that it would require a constitutional act to change the law that allows birthright citizenship. “You don’t! You need a simple act of Congress. You might not even need that!” he yelled, though the jury is very much out on whether that is true.

“Our leaders are incompetent people,” he then began ranting. “And I know many of them.”

Trump concluded his speech by saying that appearing at the RPOF’s Sunshine Summit was a pretty sweet deal, considering how he only had to speak for a relatively short time and then could make a quick flight to Palm Beach County, where he has a home. “I speak for 20 minutes, I get the hell out of here, I’ve done a good job.”

And then he was off, presumably to South Florida before he does it all over again this weekend on the campaign trail, leading the GOP presidential field.