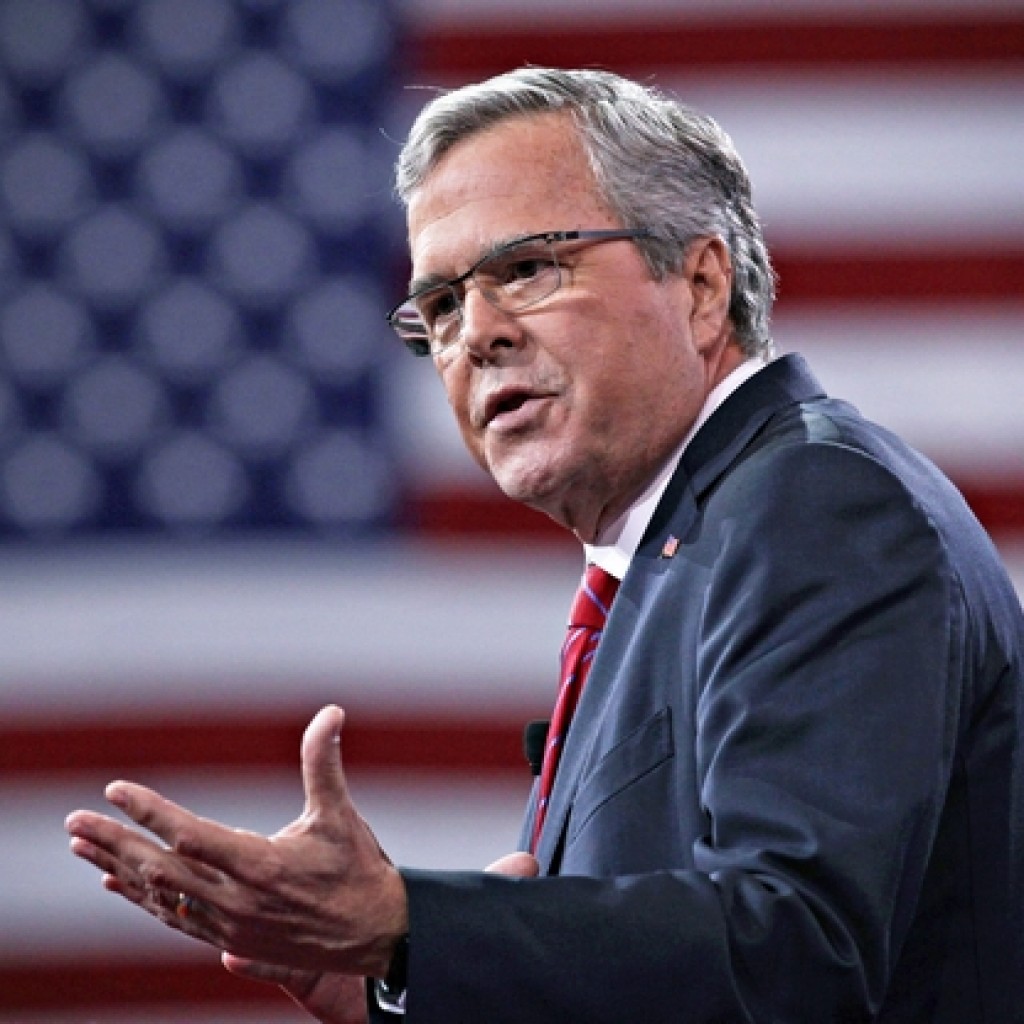 Republican presidential candidate Jeb Bush on Wednesday called for the U.S. to send more troops to the Middle East to fight the Islamic State.

“This is the war of our time,” the former Florida governor said at the Citadel five days after Islamic State militants attacked Paris and killed 129 people.

“Radical Islamic terrorists have declared war on the western world. Their aim is our total destruction. We can’t withdraw from this threat, or negotiate with it. We have but once choice: to defeat it.”

Bush had planned for weeks to deliver a speech about Pentagon and military purchasing reform at the prestigious South Carolina military college. But the horrific events in France Friday moved Bush, who has supported the potential deployment of troops in Iraq and Syria, to call for ground troops.

“The United States, in conjunction with our NATO allies and more Arab partners, will need to increase our presence on the ground,” he added, calling air power insufficient.

He offered no specifics, but said the number of Americans sent to the region should be “in line with what our military generals recommend, not politicians.”

The speech came as European nations hunted for conspirators in the attack and amid a fierce political debate within the U.S. over whether to limit or halt the resettlement of refugees fleeing war-ravaged Syria. One of the Paris bombers was thought to have arrived in a wave of migrants surging toward the West, but a top German official later said the Syrian passport found at a Paris attack scene was likely a fake.

Bush, the brother and son of presidents, has projected himself as a potential commander in chief able to handle such challenges. But his focus on national security has increased as his own campaign for the presidential nomination has struggled to gain traction and especially since the Paris attacks.

“The brutal savagery is a reminder of what is at stake in this election,” Bush said. “We are choosing the leader of the free world. And if these attacks remind us of anything, it’s that we are living in serious times that require serious leadership.”

It’s no mystery why Bush made the speech in South Carolina. Many of the Republican primary voters in the early-voting Southern primary state are retired and active-duty military.

Bush is not the only Republican presidential candidate who supports sending ground troops to fight the Islamic State. South Carolina’s own senior Sen. Lindsey Graham has been an aggressive advocate. Ohio Gov. John Kasich has also suggested sending U.S. troops. Florida Sen. Marco Rubio was generally supportive of President Obama‘s decision to put 50 special operations troops in Syria, and has suggested the number ought to grow. However, he hasn’t called for a larger scale mobilization.

The cuts affected military and non-military spending alike, at a time when conflicts in Syria and Iraq “spiraled out of control as President Obama and Hillary Clinton failed to act,” Bush said.

And while Bush has often referred to the Islamic State as an unconventional threat, his prescription for the military includes heavier spending on its conventional elements.

He called for doubling the U.S. Marine Corps’ battle-ready strength to 186,000, and updating the U.S. nuclear weapons capacity.

He also called for increasing production of next-generation stealth bombers. Such aircraft, such as the F-35 joint strike fighter, carry a price tag of roughly $150 million apiece. Bush did not specifically propose a way to pay for the buildup.

Bush, a year ago viewed as the likely front-runner, has failed to move to the top tier of GOP White House hopefuls in a field where political outsiders Donald Trump and Ben Carson and charismatic young lawmakers Marco Rubio and Ted Cruz have eclipsed him.

While Bush projected himself as a potential wartime commander in South Carolina, he also appeared on Tuesday to be anticipating criticism that he would wage war in the Middle East, as his father and brother did when they were president. Bush’s brother, George W. Bush, left office with low approval in part due to his handling of the 2003 invasion of the war in Iraq, and its aftermath.

“I think it’s important for the next president, whoever he or she may be, to learn from the lessons of the past and use those lessons to focus on the future,” Bush told an audience of more than 300 at Coastal Carolina University in Conway Tuesday.

On Thursday in New York, Clinton will deliver an address outlining her strategy for defeating ISIS as well as her overall plan for fighting radical jihadism.