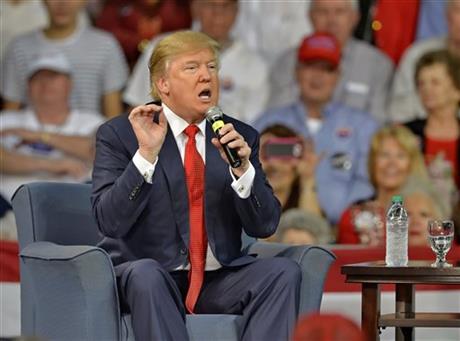 “Justice Roberts really let us down. What he did with Obamacare was disgraceful, and I think he did that because he wanted to be popular inside the Beltway,” Trump told about 4,000 supporters. The celebrity billionaire was referring to the chief justice twice voting to uphold key provisions of President Barack Obama‘s 2010 health care law and to the expressway around the District of Columbia, an area regarded as the center of U.S. government and politics.

Thomas, arguably one of the court’s most conservative members, is “very strong and consistent,” Trump said.

The GOP front-runner offered his assessment during an hourlong question-and-answer-session with Attorney General Alan Wilson. The South Carolina Republican is hosting a series of forums in this early voting state to query GOP hopefuls about their theories on constitutional law and the role of the federal government.

But the event had the feel of a typical, large Trump rally: a boisterous crowd in Trump campaign regalia who drowned out multiple protesters with chants of “Trump! Trump! Trump!” as authorities escorted them out.

Trump avoided specifics on nearly all of Wilson’s questions.

He praised Thomas and rebuked Roberts when Wilson asked what kind of federal judges he would appoint, but did not specifically address Wilson’s question about how a President Trump would vet and interview prospective nominees. “We want smart, conservative and we want people that are truly in love with the constitution,” he said.

Trump pledged to gut executive actions taken by Obama, but the only policy area he mentioned was immigration. “He signed an executive order where people can just pour in,” Trump said, a reference to executive orders intended to forestall deportation for certain immigrants already in the country illegally.

Prompted by Wilson, Trump also blasted government regulations. He focused his ire on water regulations that he says flood the market with bad faucets, toilets and shower heads.

“There’s no water pressure,” he complained. “The problem is you stand under the shower five times as long wasting more water than if you used the other one. So people are flushing seven, eight, 10 times. The end result is that it’s no good and you end up wasting more water.

“I could name hundreds like that,” Trump concluded about the regulations.