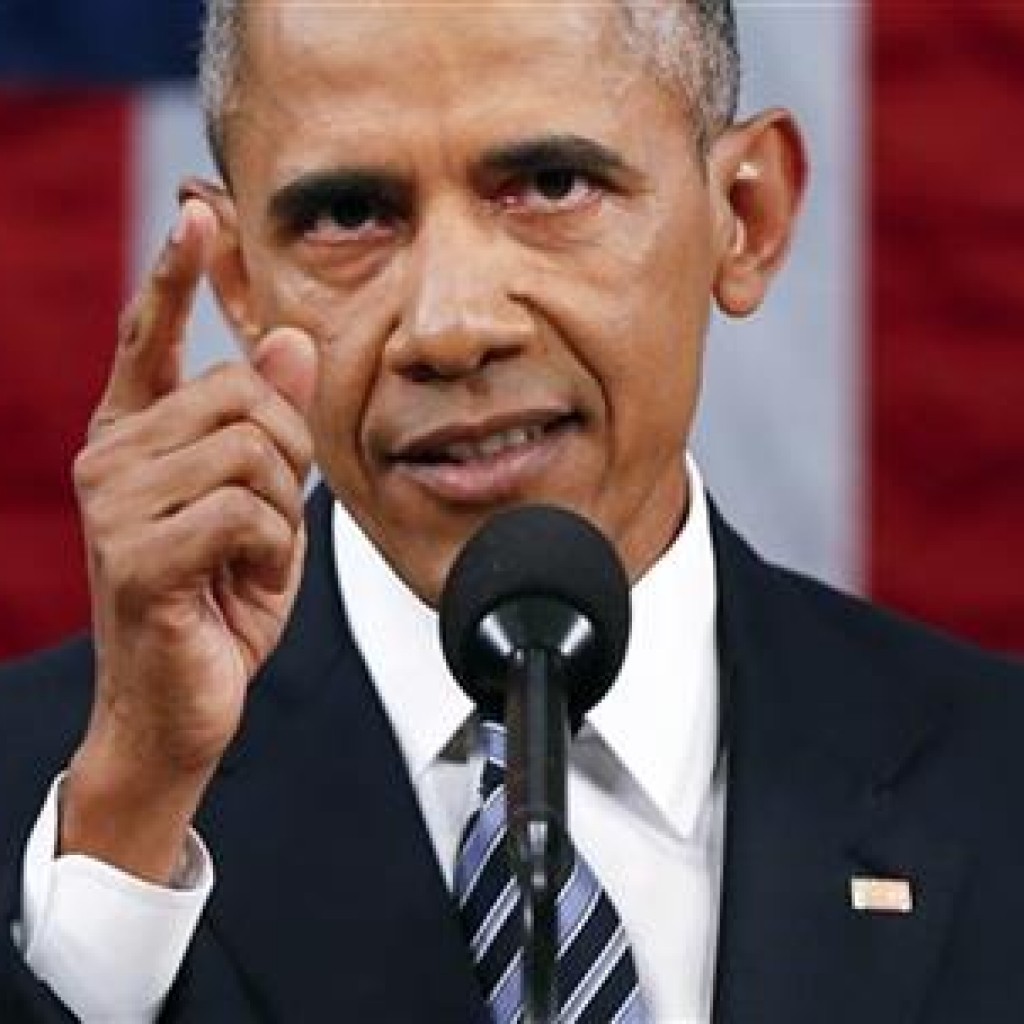 No surprise, Florida’s congressional delegation split along party lines in its initial Twitter reaction to President Barack Obama’s State of the Union address.

Addressing a hostile Republican-led Congress and a country plunged in a tumultuous, at times angry presidential campaign, Obama used his final address to summon an affirmative vision of his administration and for the future. He rebutted critics, naysayers and the GOP White House hopefuls, but also acknowledged his own failure to transform the country’s bitter politics and unite the nation.

While Democrats like U.S. Rep. Frederica Wilson gushed, “The country we love: Clear-eyed. Big-hearted. Undaunted by challenge. Unarmed truth and unconditional love will have the final word,” Republicans like Rep. Dennis Ross complained, “POTUS, again, lectured on sidetracked issues in a weak attempt to distract us from what have been the failed policies of his administration.”

All Republican Cuban-American members of the Florida delegation, led by presidential candidate U.S. Sen. Marco Rubio, criticized the opening to Cuba. Rep. Mario Diaz-Balart, delivered the Republican response in Spanish. When Rep. Carlos Curbelo learned that Obama would call for lifting the Cuba embargo, he observed: “Guess the dictators earned that too by refusing to return our Hellfire missile.” And Rep. Ileana Ros-Lehtinen told Miami’s WIOD radio: “Instead of Obama asking Congress to lift embargo, the administration should tell Castro to lift the repression against people of Cuba.”

Democrats were uniformly uplifted and ecstatic about the address: “SOTU address is optimistic and hopeful. Very different from the House GOP doom-and-gloom,” tweeted Rep. Alcee Hastings.

But no member of either party was quite as personally moved as Rep. Lois Frankel: “How lucky am I?” she enthused. “Snagged a kiss on the cheek from POTUS again this year!” 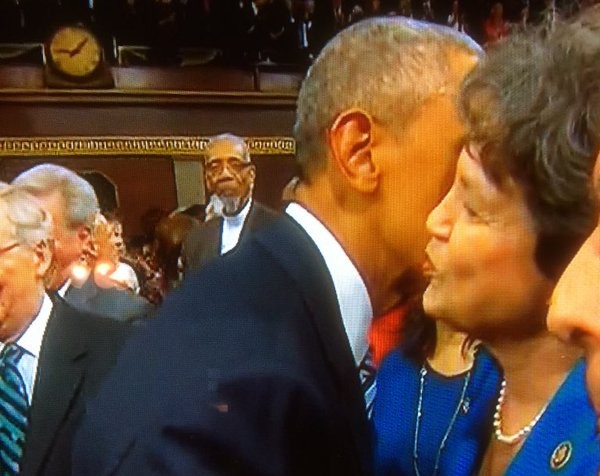 Here is a compilation of reactions to Obama’s address from Florida politicians:

“It’s frustrating when partisanship prevents the Congress from getting things done. And it’s pretty clear that Americans are fed up with our inability to enact common-sense reforms. While we were able to get a few things passed back in December, there’s still a lot that we need to accomplish. And I will continue to do everything that I can to try to bring people together in a bipartisan way to get things done.”

“Tonight, President Obama argued that a bright future awaits our nation should we as a people come together to work for it. Our nation has made great strides in recent years, with a deficit reduced by a trillion dollars, an unemployment rate cut in half, and a health care system that covers 18 million more Americans. Yet as the sponsor of the Democracy for All Amendment, I wholeheartedly agree with President Obama that so long as we have elections that value dollars over voters, our ability to build a future of equal opportunity and economic security will remain compromised.

“From solving our student debt crisis to strengthening Social Security, I truly believe that the answers to our greatest challenges lie in elevating, not drowning out, the voices of the American people.

“Finally, as a member of the House Foreign Affairs Committee, I was pleased to hear the President make a tough case not only for hitting the terrorists in ISIS hard but working even harder to bring an end to the deadly conflict in Syria. At a time when so many of the challenges confronting our nation are global in scale, from the spread of violent extremism to the threat of climate change, principled and steady leadership from the United States of America has never been more welcomed or more needed worldwide.”

“Countering the noise of negative political rhetoric, the President delivered an optimistic message affirming the greatness of our country,” Frankel said. “He offered a vision of a future that advances people instead of holding them back, keeps our nation secure, and leaves our planet healthy for generations to come.”

“President Obama’s speech tonight was optimistic and hopeful for the future. I proudly share many of his visions for the direction of our nation…For too long, extreme partisanship has gripped this institution, transforming issues where there is common-ground into partisan squabbles. Rather than work with Democrats to help the most vulnerable within our country, Republicans in Congress have tried to run out the clock on the President, holding up critical legislation, while voting more than 60 times to take healthcare away from millions of our citizens.”

“I was both inspired and motivated by the President’s address, showing how far we have come as a nation in recent years as well as reminding us of all the important work still ahead. I was pleased to see President Obama’s continued focus on strengthening the middle class to make sure the American dream remains in reach for all hardworking families. That’s why Congress should act immediately on common-sense policies like raising the minimum wage, protecting Social Security and Medicare, and making healthcare more affordable.”

President Obama delivered a strong, inspirational address to the nation this evening.

I was thrilled to hear the President reiterate his longstanding calls for comprehensive immigration reform, paid family leave, a higher national minimum wage, and protected and strengthened Medicare and Social Security programs.

As a cancer survivor, I was personally moved to hear the President talk about a new mission to combat this pernicious disease, led by Vice President Joe Biden who, after tragically losing his son Beau last year to cancer, admirably called for a moonshot effort to ensure fewer families experience the heartbreak the Biden family has endured.

Importantly, President Obama also spoke about the America he envisions and aspires toward beyond his Presidency, such as fewer deaths from gun violence, more opportunity for more people to get and stay ahead in a strengthened economy, more affordable educational opportunities and solutions to combat climate change. The President eloquently highlighted the unique attributes of our people and our nation – hard work, optimism, innovation and diversity – and illustrated how they will serve us and future generations well into the future.

And the future of our country is bright because of President Obama’s leadership.

Listening to the President tonight, I reflected again on his unwavering resolve to bring our nation back from the worst economic crisis since the Great Depression. Seventy straight months of private sector job growth that has led to more than 13 million jobs created. Saving the auto industry. Quality, affordable health care for 17 million more Americans. Enacting important Wall Street and consumer protection reforms. Deficits cut by nearly three-fourths. These are just some of the accomplishments the American people have come to count on from their President, despite Congressional Republicans’ best efforts to prevent him from achieving nearly all of his agenda these past seven years.

Lastly, it was incredibly important when the President called out politicians who insult Muslims.

At one point, the President also said, ‘democracy […] require[s] basic bonds of trust between its citizens.’ Of course, demonizing and lying about Muslims and Muslim-Americans is one flagrant attempt to rip those bonds of trust apart, but the President and Congressional Democrats won’t stand for it. And neither do the vast majority of the American people.

In Florida, we have created an environment where Florida families can get a job. We have cut taxes over 50 times and have had billion dollar surpluses for three straight years. We’ve done that through fewer taxes, less regulation and less government power. We didn’t hear that tonight from Washington and we have not seen that coming out of Washington.

What we heard from President Obama was empty rhetoric aimed at preserving his legacy rather than introducing new ideas for moving our country forward, putting Americans back to work and defeating our enemies. President Obama told a tale of “success” but he ignored his doubling of our national debt to almost 20 trillion dollars, millions of good paying jobs replaced by lower paying ones and a much more dangerous environment where Americans feel less safe and secure.

In Washington, they have it backwards, accepting higher taxes, accepting more government, and accepting less freedom. It’s time for change in Washington.  It’s time to start seeing the results in Washington like we have seen in Florida. In Florida, we deliver results, and take nothing less than that as success.

“While President Obama may be content with the status quo, the American people will not settle for the Democrat’s failed agenda in 2016 and beyond. Obama’s suggestion of more government intervention is the reason why the American people overwhelmingly distrust big government and say the country is on the wrong track. It is clear that our nation wants to see the next president take a new direction. Our State Party is entirely committed to defeating Hillary Clinton and electing a strong Republican president who will create the real economic opportunity that the American people deserve.”

“As we saw tonight in President Obama’s address to the nation, he continues to get it wrong when it comes to securing our borders, defending our constitutional right to bear arms and confronting terrorist threats to our nation head on.

“Now more than ever, we need strong conservative leadership in Congress.  As a staunch Republican, I will not waiver in my efforts to address our nation’s issue of border control, fight for Americans’ Second Amendment rights, demand a firm commitment to defending our country against terrorism and set our economy on the right path toward a better future.

“While his administration tip-toes around immigration policy, President Obama is failing, yet again, to make the American people his No. 1 priority. Currently, our nation faces threats of terrorism and instead of committing to protect our borders, he has done nothing to assure Americans that safeguards are in place to prevent terrorists from entering our country. Continuing on this path is both reckless and unjustifiable, and I will strive to hold our government to a higher standard of accountability when it comes to securing our borders.

“President Obama also unsurprisingly defended his executive actions in favor of gun control. Arguably, the most unsettling part of this is his apparent disregard for the constitutional rights of the American people, especially the ‘Right to Bear Arms.’ As a proponent of conservative values, I can’t overstate the importance of these fundamental constitutional rights, and I will continue to protect and defend them.

“However, our greatest concern should not only be President Obama’s lack of urgency in developing a strategy to confront the Islamic State, but also his refusal to recognize ISIS for what it is: Islamic extremism. The fact of the matter is that our leadership should not stand idly by in the face of a threat to the American people, which is why I intend to advocate strongly for the location and destruction of ISIS.”

previousAnalysis: Obama in campaign form in final State of the Union