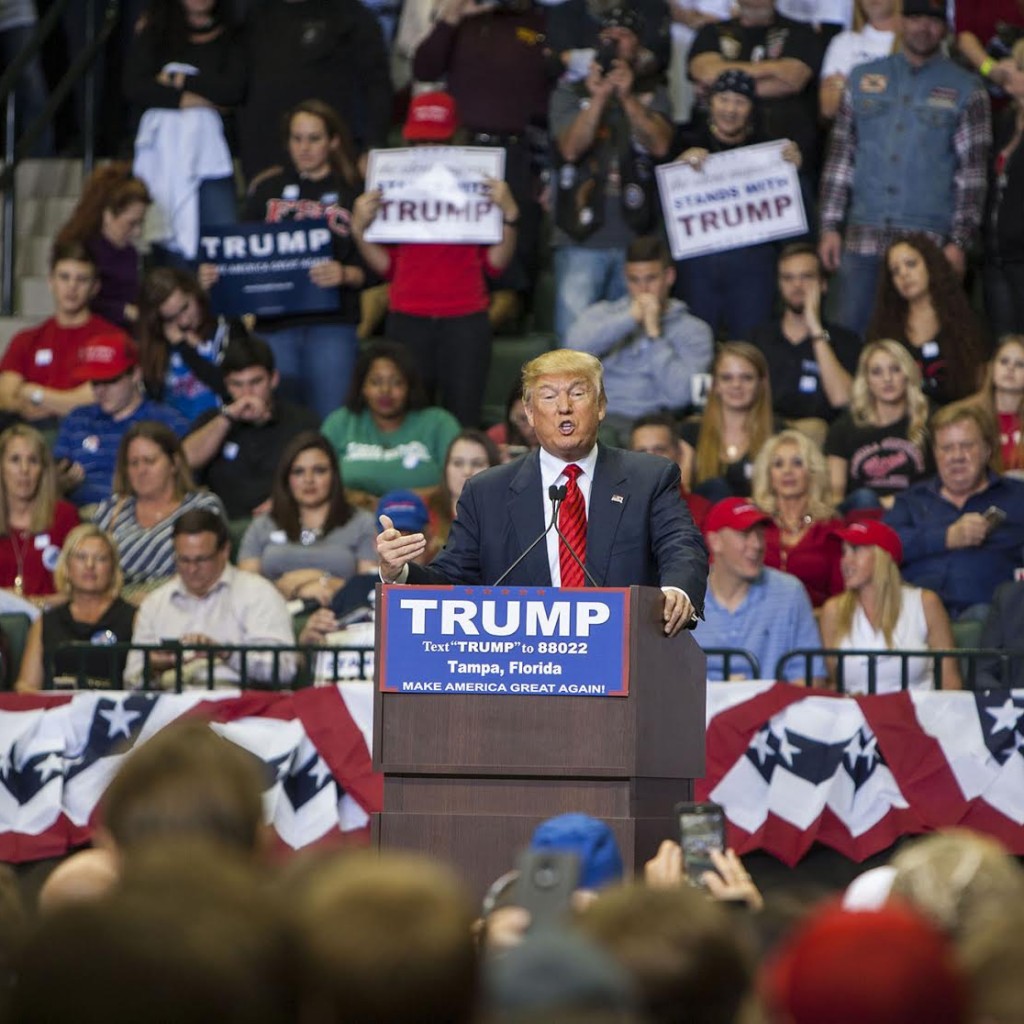 “They said this is a modern day phenomenon,” he said, looking at the packed audience in the USF Sun Dome. Referring to a recent Time magazine story that referred to the anger in the populace that has fueled his campaign, he said that anger isn’t a bad thing at all. “We’re angry because we’re run by incompetent people.”

Trump’s visit comes approximately a month before Florida voters go to the polls for their presidential primary election. According to the Real Clear Politics average of polls, Trump has a commanding 20 percentage point lead over his next closest challenger in the Sunshine State, Texas Senator Ted Cruz.

Meanwhile, Florida’s native sons, Marco Rubio and Jeb Bush, trail far behind the New York City reality television magnate. The mention of Bush brought out the comic in Trump, who mocked him mercilessly.

“He’s asleep at the wheel, folks. Can you imagine Jeb negotiating with China? I feel guilty, but I spend by far the least, and I’m in the number one place. Jeb has spent like $140 million and he’s down at the bottom of the pack! He’s a vicious guy, and he’s a gutless guy. He’s got a vicious streak. He’s taking ads. $20 million worth of negative ads. What the hell did I ever do to him?”

His 19-point victory in the New Hampshire primary seems to have given him even more confidence and bravado, if that is actually possible. He was the only GOP candidate other than John Kasich not to appear at the Faith and Family Presidential Forum at Bob Jones University in Greenville, S.C. on Friday, a day before the six current Republicans will debate in that same city.

Trump blasted Hillary Clinton’s email controversy, questioning how she had the time to write so many emails in the first place. “By the way, I’m beating her in the polls,” he said as the crowd cheered. And he said he turned his focus on Bernie Sanders.

“I’d love to run against the communist,” he said, warming up to the topic. “I never believe I’d see the day in this country when a communist…is the leading Democrat. We’re going to have a communist against an entrepreneur? I like the entrepreneur,” he said, as the crowd erupted.

Although he improvises more than any other presidential candidate, there are some basic themes that he brings up in every speech: how Barack Obama and John Kerry are terrible negotiators; how he’ll bring back jobs; how Bowe Bergdahl is a traitor, and how the U.S is going to “win again.”

And there’s of course, The Wall. The wall he’ll build to keep out Mexicans and others crossing the southern border that he vows that the Mexican government will build.

Trump related how a reporter asked him this week about comments made by former Mexican president Felipe Calderon, who told CNBC that “we are not going to pay any single cent for such a stupid wall!”

Trump’s reaction? “The wall just got ten feet higher,” eliciting a sustain eruption of cheers from the audience.

Audience members recited the usual mantra about why they’re turned on by Trump, such as the fact that he “tells it like it is.”

“We need a change, because I’m tired of politics,” said Toledo, Ohio resident Ike Parker. A longtime Democrat until Barack Obama’s election in 2008, he says he doesn’t like the way the country is going, “especially with the gay rights and with the abortion and stuff, because it’s strictly against my morals and the word of God. ”

“Obama has clearly destroyed this country,” he adds, insisting that Trump can still turn the country around. He says he’d go with Ted Cruz, Jeb Bush or Marco Rubio if Trump doesn’t get the nomination.

“I think America has lost its national identity since 1988 and has been in a state of decline ever since,” says Rodney Parker, Ike’s son and a self-described libertarian. Parker says he worked for Ross Perot’s campaign in 1992 and Pat Buchanan’s GOP run in 1996.

“I have never seen a movement in all my political life that comes anywhere being equal to what Donald J. Trump has brought in his candidacy,” he says with intensity. “It’s fascinating, its exciting, and as much as getting everybody involved, it’s good for America.”

Tampa resident Chris Roach said he didn’t decide on a candidate until right before the Iowa caucus late last last month. “If he’s able to do half of what he says he will do, it’d be a good thing.”

Maria Haddon from Land O’Lakes says she’s leaning towards Trump, confessing that she’s not really happy at all about the state of politics in 2016. She likes the fact that Trump isn’t a politician. “He’s a businessman, and that appeals to me,” she said, saying that was the same reason why she backed Mitt Romney in 2012.

And she says that while Trump has said some outrageous things, but that doesn’t bother her at all. “What about the lies that Obama has said?” she asks. “So what’s the difference?”

Trump will again be center stage on Saturday night, as the Republicans debate at 9 p.m. on CBS.