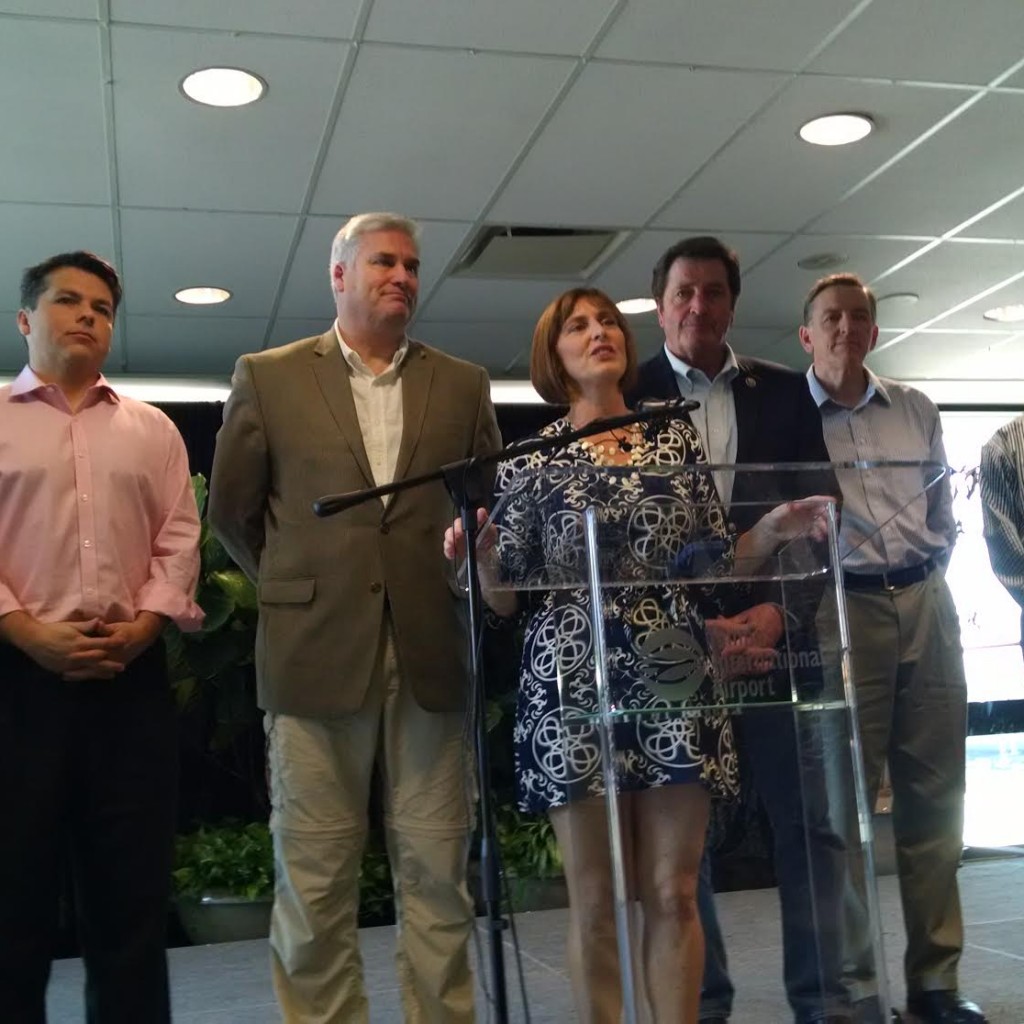 A seven-member bipartisan group of Congress, led by Tampa Democrat Kathy Castor, departed from Tampa to Cuba on Saturday.

“We intend to meet with small business owners and entrepreneurs to gain a better understanding of how the changes in the Cuban economy are working,” Castor said in a brief news conference held at Tampa International Airport shortly before the delegation boarded. “We intend to meet with officials with the Port of Mariel to investigate how we can improve trade on the island and to visit with folks in the telecom sector.”

The Tampa congresswoman became the first Florida lawmaker to call for the end to the 50-year-plus economic sanctions against Cuba after her initial visit in 2013. Since that time she’s continued to work with the Obama administration to open relations between the two nations.

The bipartisan delegation is comprised of four Democrats (Castor, Philadelphia Rep. Brendan Boyle and Californians John Garamendi and Alan Lowenthal) and three Republicans. One of those Republicans, Minnesota’s Tom Emmer, is co-sponsoring legislation with Castor that calls for the end of the economic sanctions against Cuba.

“You might be wondering why a kid from Minnesota would be involved in an effort to lift the Cuban embargo,” Emmer said. “It’s all about the Cuban people, contrary to what those may say.”

It’s also about the Minnesota people, too, Emmer acknowledged. Agricultural companies in Minnesota were among the first to begin doing business with Cuba in 2000 after Congress passed exceptions to the 1996 Helms-Burton Act for agricultural products and medical supplies. “It is a very important relationship for my state, and I believe what’s good for the state of Minnesota is good for the United States of America.”

Not everyone making the trip agrees with Castor and Emmer that it’s time to end the sanctions.

“It’s a very complex issue,” said Arizona Republican Paul Gosar, who said he intends to listen and learn on the trip. Gosar hails from a state with lots of agriculture and lots of interest in furthering a business relationship with Cuba. Jeff Flake, the state’s junior senator, is also one of the most prominent Republicans in the Senate advocating to end the Cuban embargo (the other Republican in the group is Michigan’s Mike Bishop.)

Freshman Democratic U.S. Rep. Brendan Boyle from Philadelphia says he has clearly defined positions on virtually everything that comes before him in the House of Representatives, but Cuba isn’t one of them. He also says he intends to use the trip as an opportunity to learn and hopefully have some engagement with the Cuban people.

Castor represents the Tampa Bay area of Florida, one area of the state with a large Cuban population that’s quite dissimilar to Miami in terms of wanting rapprochement with the Castro-led government. There are plenty of people in the exile community in Tampa who disapprove of Castor’s entreaties with Cuba in recent years, but most are supportive.

That’s not nearly the sentiment in the Miami area, where anti-Castro sentiment remains substantial. That attitude is reflected by most lawmakers in the Miami-Dade area, including Castor’s friend and ally, Democratic U.S. Rep. and DNC Chairwoman Debbie Wasserman Schultz.

Congressman Boyle says that people in his district don’t pay much attention to the situation involving Cuba, and he doesn’t think its a major issue for people nationally.

Critics of the Obama administration’s overtures towards the Raul Castro-led government say that the U.S. has so far received nothing in terms of an improvement on human rights in the year-plus since the announcement of the diplomatic breakthrough happened.

“That’s why I want to go see and get that dialogue, ” he said after the news conference. He said he thinks such dialogue could be pretty restricted, but adds that he was a dentist for over two decades before being elected to Congress. “So there’s a lot I can interpret by watching people’s body language you know, how they interact, and that, this is the first step towards a long process.”

Castor said that the delegation intends to engage with the Cuban government on their human rights record. “We’re going to press them on change an have a respectful dialogue on how we move this relationship forward,” she said.

Also present at the news conference was Tampa International Airport CEO Joe Lopano, who said, “This is a very important day for Tampa Bay. To have this many powerful politicians here wanting to understand the issue of travel to Cuba is a sign that we’re starting to make progress.”

Since the Obama administration extended flights to Cuba from more airports a few years ago, Lopano said, TIA has made $1 million annually for its seven weekly flights to the island.

On Tuesday, an agreement will be announced in Havana that will allow U.S. airlines to have 15 days to submit proposals to the Transportation Department to fly as many as 100 flights daily to Cuba, with competition expected for at least the routes to Havana.

“We intend here at the Tampa International aiarport to ensure that we win some of those flights,” Castor said.

The delegation is expected to return midweek.