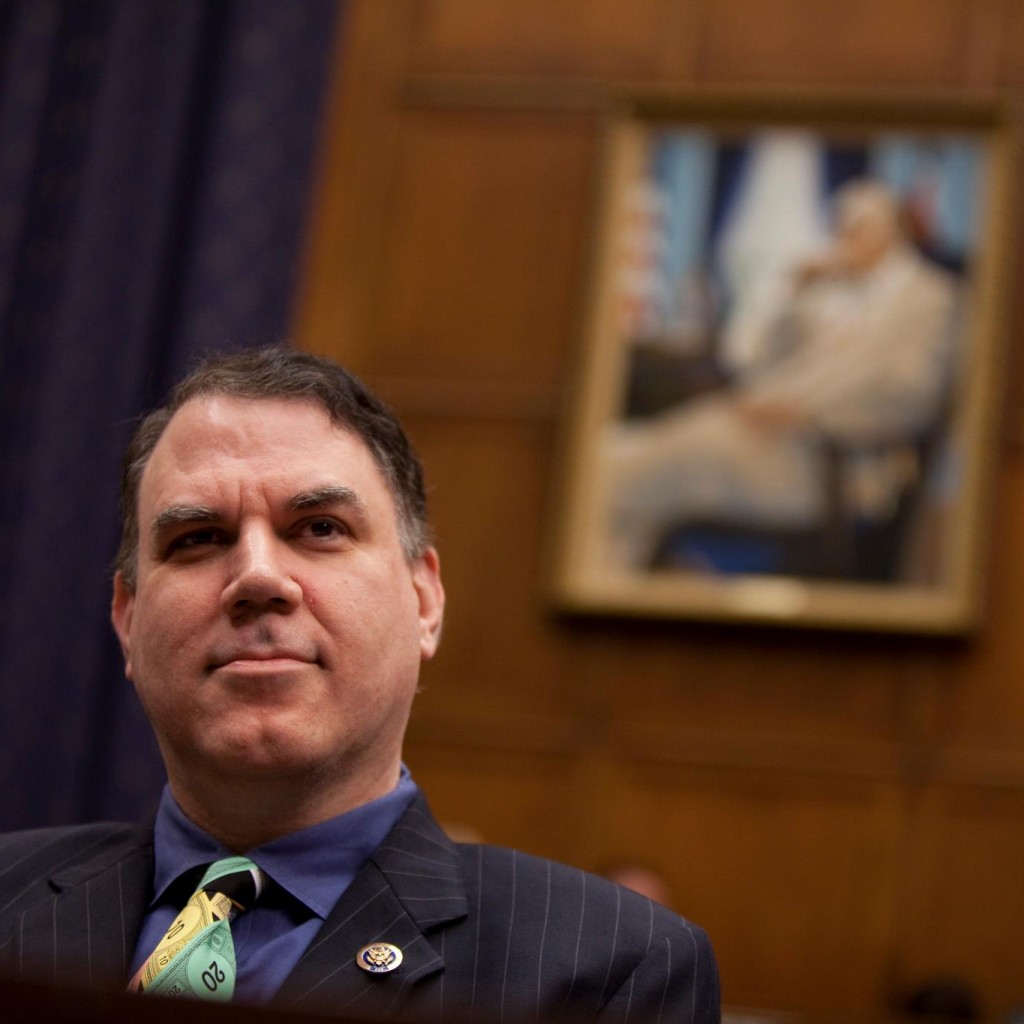 Controversy over U.S. Rep. Alan Grayson’s hedge funds is narrowing to a simple question that has sparked serious speculation: Was the SEC filing for his only active investment fund supposed to indicate three investors or four?

whether his SEC filing for his only active fund was supposed to report three, or four, investors.

The question was raised regarding his Securities and Exchange Commission filings for his fund originally known as the Grayson Fund LP, one of his hedge funds that are Delaware-based, not Cayman Islands-based.

The answer may determine whether his political critics have evidence of potential ethics violations – the prospect he was making money off his name and prestige as a congressman – or just of a clerical error, as he has said.

Grayson, of Orlando, is a Democratic candidate for the U.S. Senate who presents himself as a champion for working-class and middle-class people, often against alleged abuses by Wall Street and hedge fund managers. However, he’s found himself under a torrent of criticism and questions about hedge funds that he managed in his own name, much to the glee of his Democratic primary opponent U.S. Rep. Patrick Murphy of Jupiter.

Last year two ethics complaints were filed against him with the U.S. House of Representatives,  charging among other things that he was using his own name and his position as a member of Congress to solicit investors to the hedge funds and therefore to enrich himself. In the fall he met with the House Ethics Committee.

“Alan Grayson is one of those people in that small group at the top of our economy that believes he can play by his own rules,” said Celeste Bush, who filed one of those ethics complaints. She’s chairwoman of the St. Lucie Democratic Executive Committee, and a Murphy supporter.

No report has been released on those complaints, and Bush said she has heard nothing about the complaint she filed.

“Politically he’s definitely in a little bit of trouble right now, because this looks not very good,” said University of Central Florida political scientist Aubrey Jewett. “Clearly. when the first headlines came out, and the way the story was first presented, it makes him look pretty bad.”

Some of the early questions involved two hedge funds he opened in the Cayman Islands, with people wondering why someone seeking transparency in corporate finance would open overseas funds. But he has always insisted those funds have never had any activity. In spite of the market he said he envisioned for them — unions, churches and such that could take advantage of them because of their unique circumstances — the funds have been completely dormant.

His SEC filings support that, showing no activity, ever.

Then there was the question of whether Grayson used his own name and his stature as a congressman, while he’s been in Congress, to solicit for the hedge funds and make money.

He also has denied that, saying they were opened in 2011 when he was a private citizen and he has not pursued new investors since taking office.

“This is much ado about nothing,” said Susan Smith, a Grayson supporter who is president of the Democratic Progressive Caucus of Florida.

The issue of hedge fund activity was raised again last week, however, with more revelations, creating another round of criticism and a harder rain of political fallout.

A New York Times story noted, among other things, that the SEC documents appeared to show an increase in investors to four, from three, occurring after Grayson had taken office at the start of 2013.

The Times story also cited what appeared to be a marketing brochure for the Grayson Fund LP that bragged about its manager being in Congress and who had once served on the House Committee on Foreign Affairs, who knew about foreign markets and politics. The Times story also quoted that document and other marketing materials as encouraging investors “to capitalize on the unrest he observed around the world, and to take particular advantage when there was ‘blood in the streets.’”

Grayson told The Times he doubted the materials were ever circulated. And those close to him question whether he had ever seen them before.

The Times article swiftly led to calls from Murphy, a host of high-ranking Florida Democrats (who are Murphy supporters), and U.S. Sen. Democratic Leader Harry Reid of Nevada (also a Murphy supporter) for Grayson to do everything from close the funds immediately, to drop out of the Senate race, and even to quit Congress. An article published online by the progressive politics magazine The American Prospect this week blistered Grayson based on the Times report, calling him “something of a fraud.”

A key point in the Times reporting focused on the fact that the Grayson Fund LP went from three investors and $13.2 million in sales, as reported in an SEC document in 2014, to four investors and $16.3 million in a 2015 document.

If Grayson is not soliciting investors, when did the fourth one come in, why and how? How could Grayson add even one investor if he was not doing business through the fund while in Congress?

In November, an article published by The Hill political news medium quoted Grayson’s congressional Communications Director Ken Scudder as describing the fourth investor as someone who “ ‘cashed out’ without any gain, loss, income or profit to the partnership.”

“The partnership is a ‘friends and family’ partnership, and that one investor was a long-time personal friend of Rep. Grayson whose relationship goes back many years before Rep. Grayson ever was elected to Congress,” The Hill reported Scudder stating in an email adding, “Rep. Grayson’s status as a Member of Congress had no bearing whatsoever on that investment.”

Then last week The Times article reported Grayson as saying that the difference between three investors and four was essentially a typographical error.

This week Scudder appeared to indicate, in an email to FloridaPolitics, that the correct answer should be four, but had been reported as three because at the time of the 2013 and ’14 reports one investor had already left, so there had only been three investors remaining at the time those reports were filed. The error was reporting three.

In fact, the number of investors was reported as four in the two most recent SEC filings, in October, and in an amendment posted two weeks ago.

Grayson also maintains that he has never profited from any of the investors. All of his SEC filings for that fund show the “None” boxes checked for sales compensation.

But there is no disclosure of what management fees Grayson might have collected to manage the investments.

Honghui Chen an associate professor of finance at the University of Central Florida, called both the $16 million and the four investors in the Sibylline Fund “really small,” and said the management fees probably would not amount to much, after the manager paid all the investment fees he would have to pay.

Chen said the fund is typical of how many big hedge funds start: small, with just family and friends. Over time the goal is to develop an investment track record, which could then be used to attract more and far bigger investors. That could be Grayson’s intention, looking ahead to when he no longer is in office, he suggested.

And that could be one reason Grayson has been so reticent to close the fund, as his critics have demanded.

An interesting question then, Chen said, is how Grayson might be managing the investments, and whether he ever has and pursues opportunities to apply his knowledge and influence as a congressman in doing so.

“I can use my influence or knowledge to improve the (fund’s) performance, which can help me in the future to attract more investors,” Chen suggested.

Bush doubts Grayson’s responses, and said she believes he has used loopholes and excuses to justify financial behavior that could be repugnant to average voters.

“It is thinking like this that has developed loophole after loophole to justify the super rich keeping their money while pressing the burden of supporting our government solidly on taxing of the middle class,” she stated in an email to FloridaPolitics. “Need we wonder why the middle class is shrinking away?”

Still, the whole matter hinges on a fund that Grayson has maintained he set up for family and friends, so Smith called it “a tempest in a teapot.”

“There’s really not anything new here,” Smith claimed of the Times report. “I was very concerned about it (the hedge fund) when I first heard about it and he called me one day (last spring). … I was satisfied with his answers that this was something that had not been very active at all since he started it. He got into it when he was out of Congress to help with family and friends.”

The Murphy campaign has taken up the controversy with full force, and has gained plenty of traction with it.

University of South Florida political scientist Susan MacManus thought the Cayman Islands angle had more potential to anger voters, compared with a hedge fund managed for family and friends — assuming the House Ethics Committee or someone else does not find a smoking gun related to outside investors or Grayson’s reporting.

“Is this really an issue that will resonate with a whole lot of people when they already think most politicians have way too much money? I can see how it will be spun: It’s not a big deal,” she said.

And it’s early in the campaign season, Jewett said.

“The good news for him (Grayson) is it’s not July. It’s not the month before the primary. So there is plenty of time for him to clarify what is going on,” Jewett said. “And of course, in true Grayson fashion, he doesn’t really play defense, he went right back on the offense. We certainly have seen him recover from other missteps.”