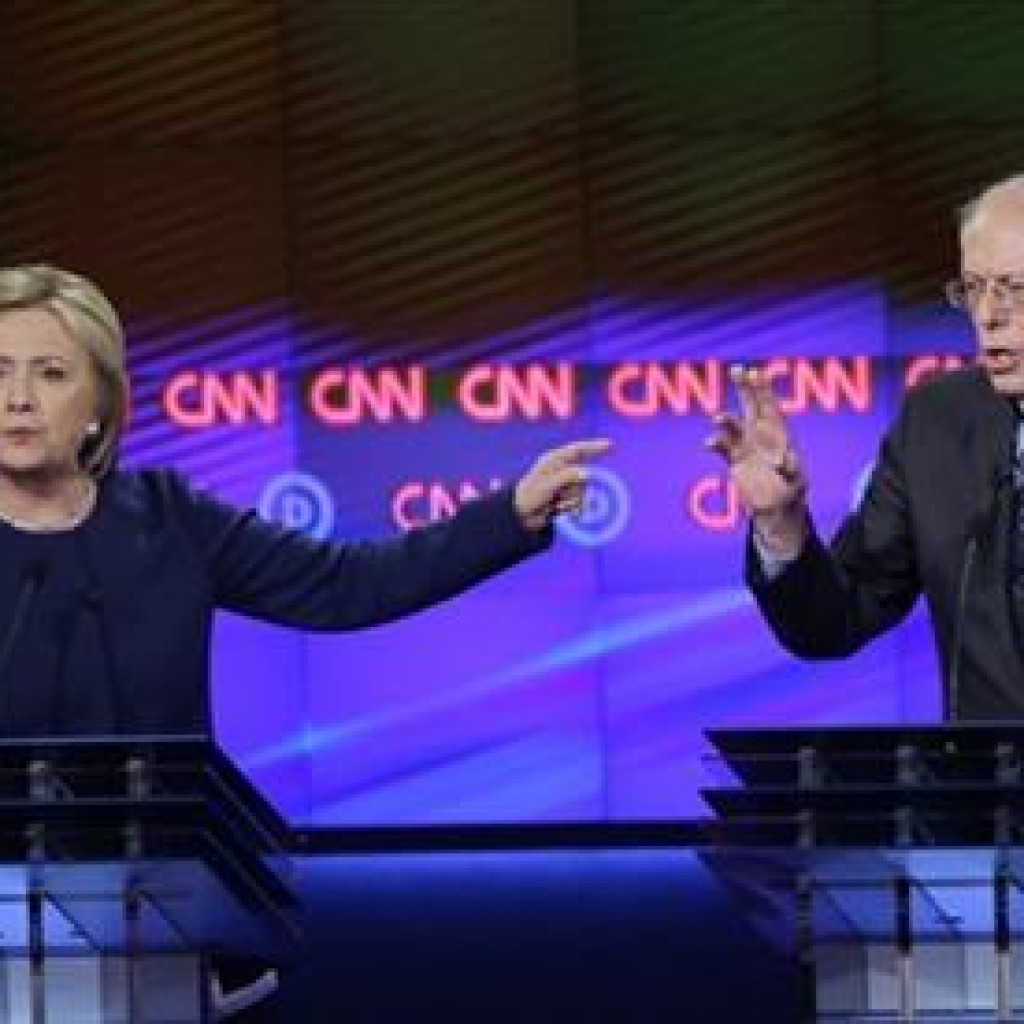 Clinton accused him of turning his back on the auto industry and Sanders countered in the Sunday night debate that Clinton’s friends on Wall Street had “destroyed this economy.”

It was a marked change in tone for the two Democrats, signaling Sanders’ increasingly difficult effort to slow the momentum of the party’s front-runner. Both candidates frequently interrupted one another and accused each other of misrepresenting their records.

“Let’s have some facts instead of some rhetoric for a change,” Clinton snapped at Sanders at one point.
“Let me tell my story, you tell yours,” Sanders shot back at another. “Your story is voting for every disastrous trade amendment and voting for corporate America.”

More than once, Sanders chafed at Clinton’s interruptions, saying, “Excuse me, I’m talking” or “Let me finish, please.”

Their disagreements were clear, but still the debate’s tone was nothing like that of the Republican debate in Detroit just three days earlier, a four-way faceoff that was marked by a steady stream of personal attacks, insults and even sexual innuendo. The Democrats’ faceoff, in comparison, was a more civil, if heated, affair.

Clinton said that while she and Sanders have their differences on policy, “compare the substance of this debate with what you saw on the Republican stage last week.”

Sanders chimed in, “We are, if elected president, going to invest a lot of money into mental health and when you watch these Republican debates you know why.”

Both had a good laugh at that.

Each made a case for being the best candidate to defeat GOP front-runner Donald Trump in a November matchup.

Clinton said she’s gotten more votes than Trump in the primaries, and predicted that his “bigotry, his bullying, his bluster are not going to wear well on the American people.”

Sanders declared: “I would love to run against Donald Trump,” adding that polls show “Sanders vs. Trump does a lot better than Clinton vs. Trump.”

Sanders, who argued with considerably more edge than in past debates, pounced early when Clinton spoke about a need to keep jobs from shifting overseas.

“I am very glad that Secretary Clinton has discovered religion on this issue,” he said, then went on to criticize her past support for trade deals that he maintained had “disastrous” consequences.

Clinton, too, took the offensive early on but more often found herself fending off Sanders’ criticism.

In her most pointed thrust, she said Sanders had voted against a 2009 bailout of carmakers, adding, “I went with them. You did not. If everybody had voted the way he did, I believe the auto industry would have collapsed, taking 4 million jobs with it.”

Sanders countered that the money for the auto industry was part of a larger bailout package for Wall Street, adding, “I will be damned if it was the working people of this country who have to bail out the crooks on Wall Street.” He referred to the overall package as “the Wall Street bailout where some of your friends destroyed this economy.”

The debate started on a conciliatory note, with Clinton joining Sanders in calling for Michigan’s Republican governor to resign over his handling of the Flint water crisis.

An emotional Sanders said he felt “literally shattered” by the toxic tap water in Flint and renewed his call for Gov. Rick Snyder to resign.

Clinton, who had not previously made that call, added emphatically: “Amen to that,” and then said that Snyder should “resign or be recalled.”

Snyder quickly tweeted that “political candidates” will be leaving Flint and Michigan in a few days after the state’s primary but he is “committed to the people of Flint.”

In the race for the Democratic nomination, Clinton has at least 1,130 delegates to Sanders’ 499, including superdelegates — members of Congress, governors and party officials who can support the candidate of their choice. It takes 2,383 delegates to win the nomination.

nextMarco Rubio: A candidate still searching for a viable base