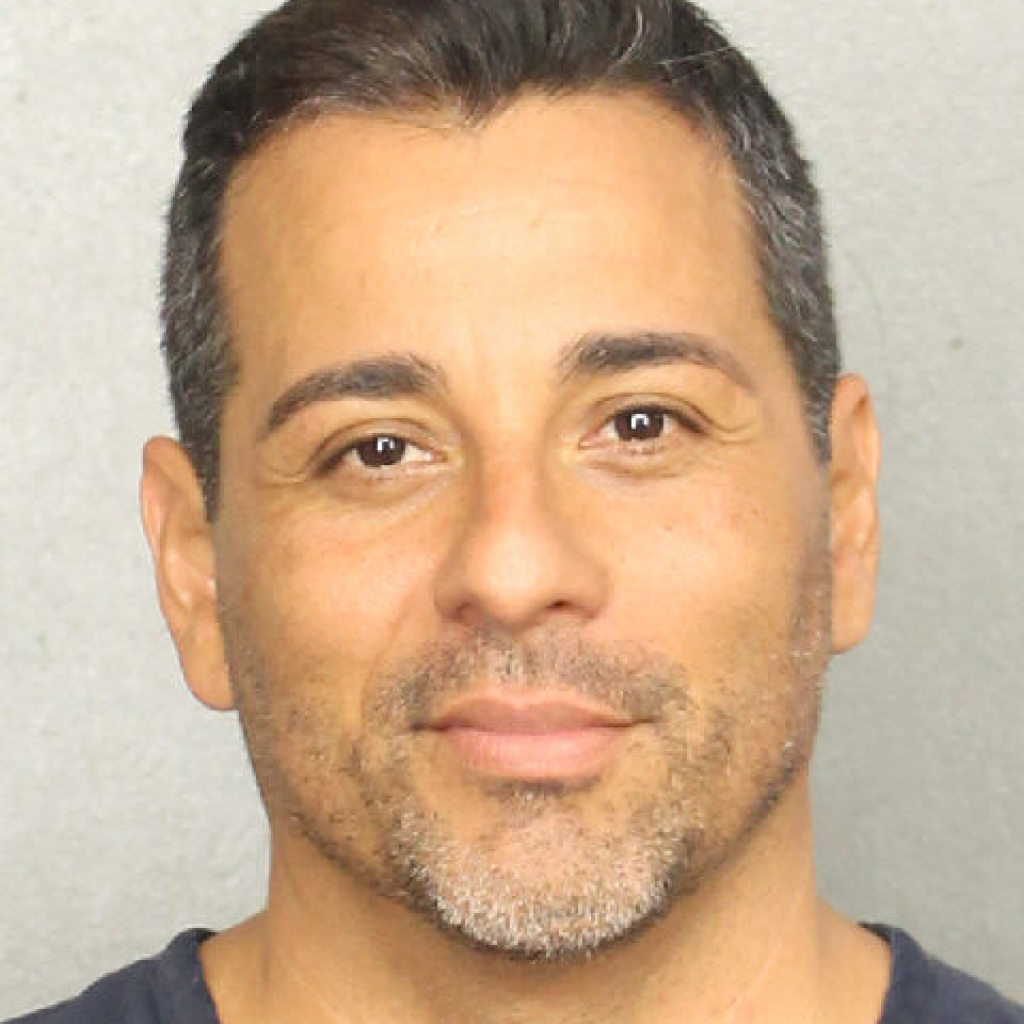 A dispute in a shopping plaza’s parking lot led to an arrest of a well-known conservative blogger, according to a Boca Raton police report.

Javier Manjarres, the 43-year-old behind The Shark Tank, was arrested Saturday by Broward County sheriff’s deputies. He was charged with attempted first degree murder with a firearm after police say he fired a weapon three times at an occupied vehicle.

On Friday, Boca Raton police responded to reports of shots fired in the parking lot of a shopping plaza. According to reports, neighbors heard five gunshots coming from the area. When police arrived they found what appeared to be blood and three .40-caliber shell casings on the ground.

A short time later, the Broward County Sheriff’s Office called the department and said a man was at the University Hospital in Tamarc with a broken nose. The man, Jason Holowinski, said he was struck in the face and head by Manjarres. He also said Manjarres fired three shots from his firearm into the driver side door and bed of his pickup truck.

The man said Manjarres is the brother of his girlfriend, Olga Manjarres.

According to Holowinski, he and and his girlfriend got into an argument at their residence on Friday and he eventually told her to  leave. He then drove her in his truck to the 1200 block of W. Palmentto Park Road near the gas station. She got out of the truck and left the area.

Holowinski said they texted after he left, something he said they do when they are in an argument.

About 45 minutes after he dropped her off, Holowinski said she called him and asked her to pick her up. According to the report, he said she requested that he drive to the back parking lot on the east side of the Palmetto Park shopping center to pick her up.

According to the report, he returned to the shopping center and saw her sitting under a tree near the building. He stopped his truck and opened the passenger side door. Holowinski told police he “saw no one else in the area.”

However, he told police that “when Olga went to step into the front passenger side of the vehicle … Javier Manjarres entered the vehicle and struck him about the face and head with his fists approximately 4-5 times.”

He said he then saw Manjarres reach for something in his waistband. However, he told officers he never saw a gun.

According to the report, Holowinski threw his truck into reverse to leave but struck Javier Manjarres’ vehicle. He then accelerated forward to flee from Javier Manjarres. That’s when he heard “three sounds that he knew were gunshots.”

“He was crouched down in the driver seat and after he heard the gunshots he looked in his rear view mirror and saw the flash from the muzzle of the gun being fired,” the report said.

Holowinski told officers he went to his brother’s home in North Lauderdale, where an ambulance took him to a hospital.

Holowinski told officers he knows his girlfriend calls her brother “when she needs something or when they are involved in an argument.”

According to the report, Olga Manjarres said she and Holowinski were arguing that evening and said Holowinski “grabbed her around the neck.” Officers said they saw no marks on her neck and “no other injuries were observed.” When asked whether her brother met with her or her boyfriend, she told officers she didn’t want to talk and said “she had not seen Javier on this day.” 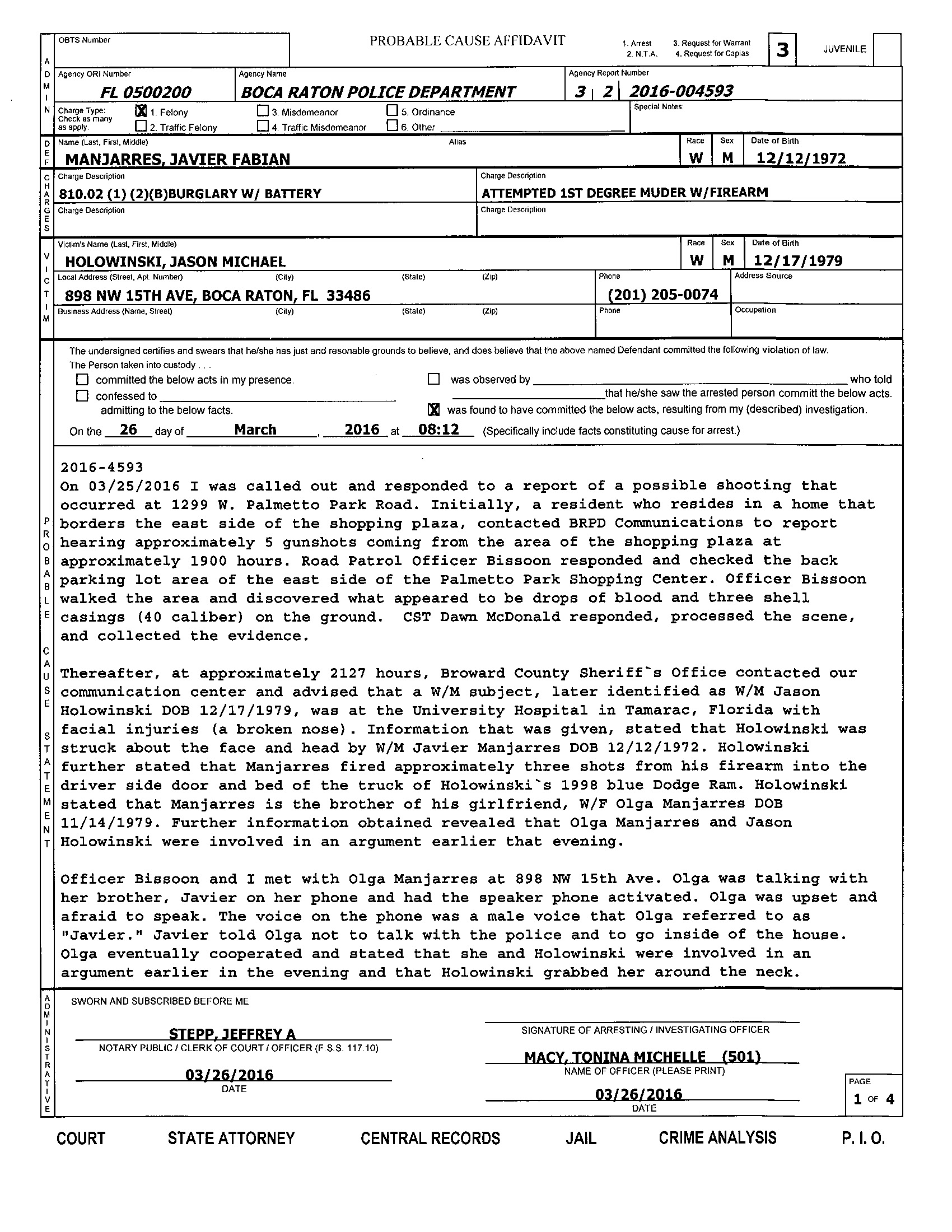 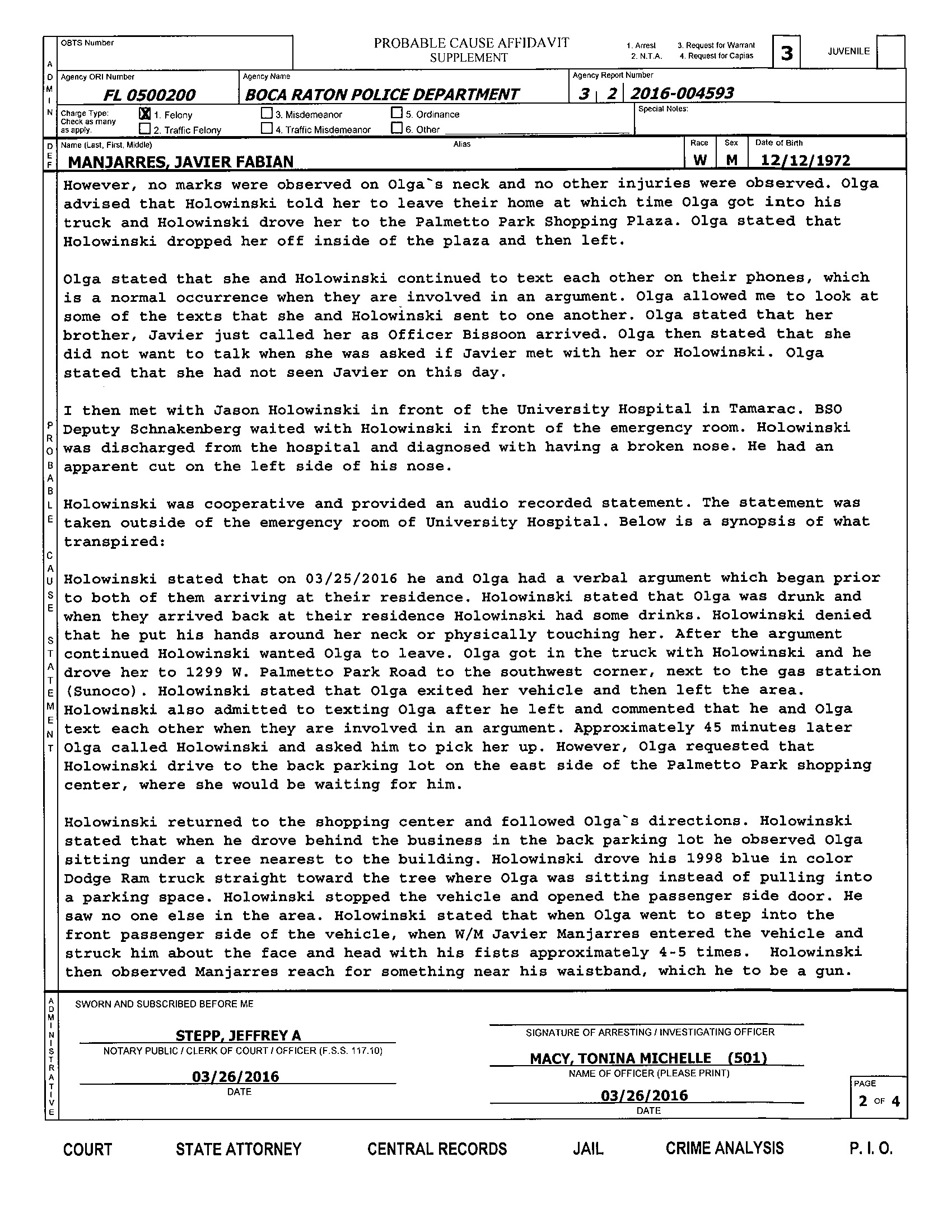 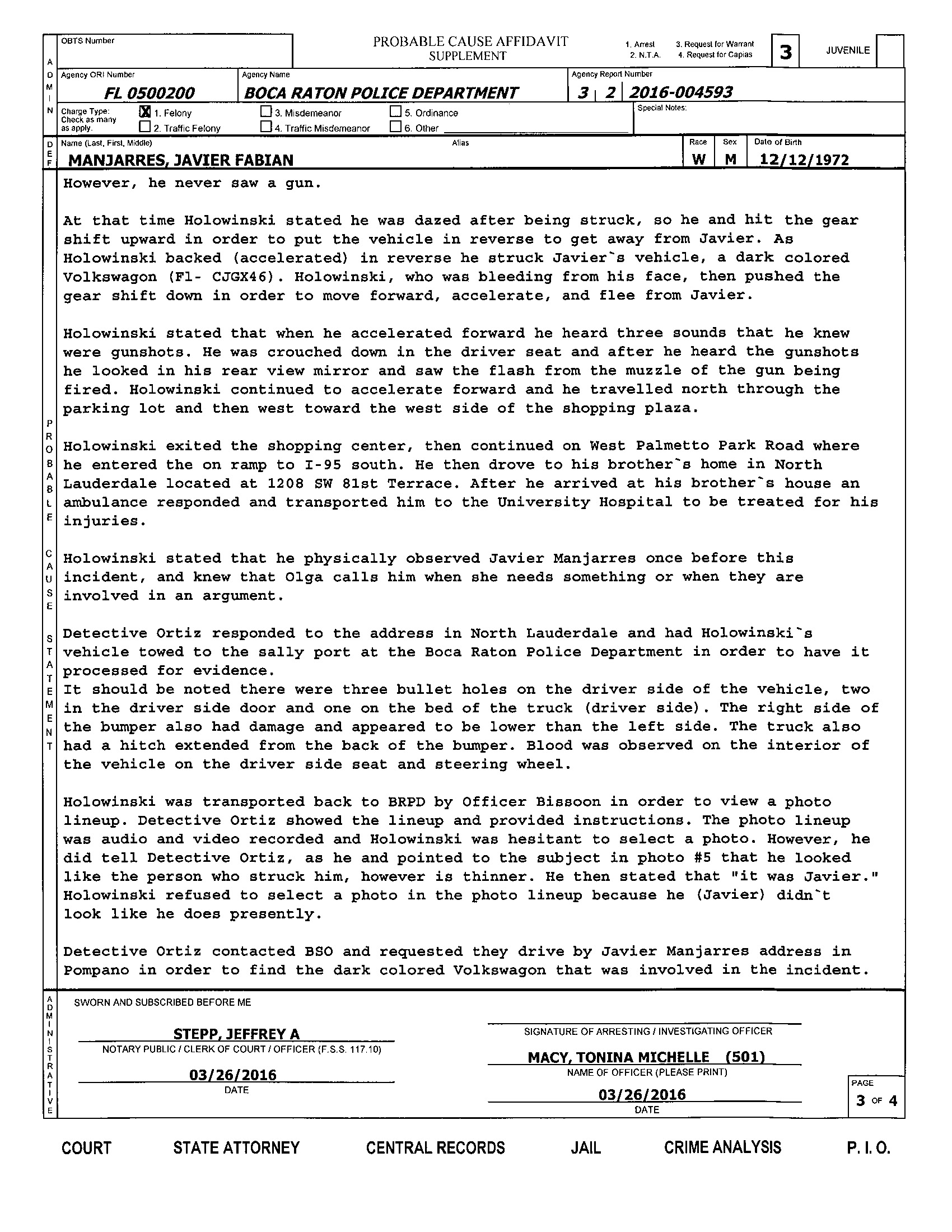 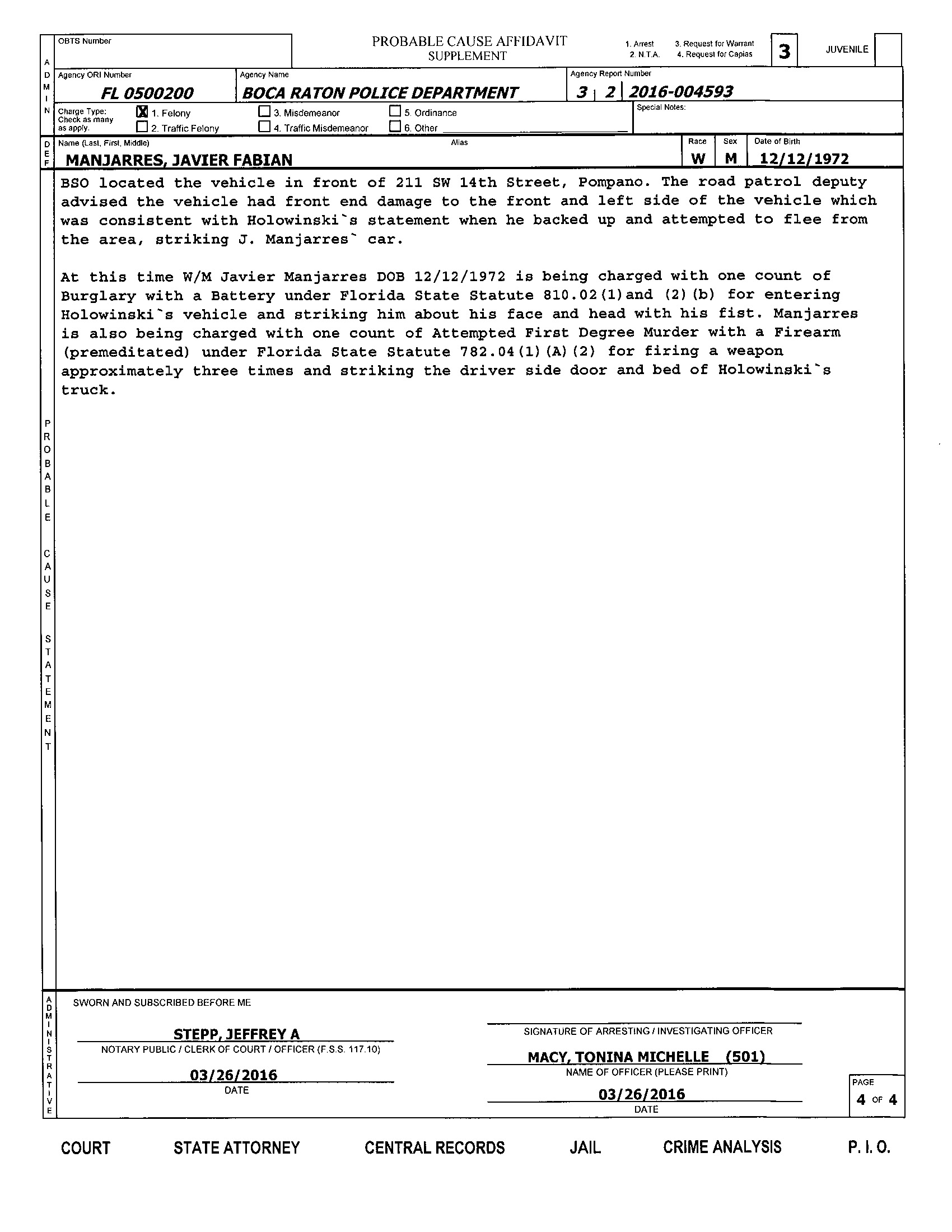 previousDarryl Paulson: Conventions have been disrupted by credentials, rules, platforms