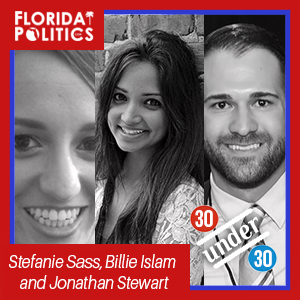 Hillary Clinton’s Florida finance team has a dynamo group of under 30 workers.

The trio of Stefanie Sass, Billie Islam and Jonathan Stewart are raising big bucks for Clinton in the sunshine state.

Islam, a Georgia native, got her start working in Atlanta city politics, while Stewart worked on Alex Sink’s 2014 bid for Congress and former Gov. Charlie Crist’s attempt to recapture the governor’s office.

Here they are in their own words.

I live in … Miami Beach, Florida. I grew up in Columbia, Maryland, not far from Baltimore and Washington, D.C.

I got into politics because … my parents taught me at a young age that it is important to vote and be involved in the political process. I was also in a Jewish youth group in high school that was completely run by the youth. We planned and ran social service and religious activities for as many as 300 young people. This taught me the importance of having and supporting strong leaders for our community.

One principle I always put above politics is … my family and friends. I am lucky enough to have a family that encourages me and great friends here in Florida, in Maryland, and around the country who serve as my support system.

People who gave me my first shot at political fundraising … Jon Adrabi and former U.S. Congressman Joe Garcia. I worked on Congressman Garcia’s Campaign as his Finance Director. Jon Adrabi hired me fresh off two internships in D.C. He is also my current supervisor as the Deputy National Finance Director for the Southeast for Hillary for America. I’ve already worked on or volunteered for a number of campaigns. I started knocking on doors and waving signs when Ken Ulman was running for Howard County Executive when I was in Middle School. In college, I was an intern for the current Mayor of Bloomington, Indiana, John Hamilton. I later was Finance Director for U.S. Congressman Joe Garcia and a Field Organizer for President Barack Obama. In D.C., I interned for U.S. Congressman John Sarbanes, U.S. Senator Ben Cardin, and the U.S. House of Representatives’ Subcommittee on Immigration and Border Security.

When I begin a project or first work on a campaign, I look for … a candidate or cause that I believe in. I’ve worked mainly on campaigns to elect candidates in recent years. I have also worked with religious and environmental organizations such as Jewish National Fund, which raises money to support ecological and developmental projects in Israel, and Kayam Farm, an organic educational farm located outside of Baltimore.

I’ve been blessed to have these people as my mentors … So many! Garcia, Adrabi, Caitlin Fishman, Juan Penalosa, Julie Caputo, Steve Jackson, Courtney Whitney, Greg Goddard, and Roni Raab.

The person I most admire in politics is … Hillary Clinton for her tirelessness in fighting to provide for and protect the less fortunate children in this country. I know that’s what you expected me to say, but I can’t help it. She is an incredible role model for me, and I am proud to be working hard every day to get her into the White House!

One lesson I’ve already learned is … to work as smart as you can, ask the right questions and take a lot of notes.

If I wasn’t working in politics … I’d be working in development or leadership for a nonprofit or university. I’d probably also own an organic farm or at least have a garden. Hoping to get a garden started after this cycle …

In 10 years, you’ll read that I am … a political consultant helping to elect progressives to local, state, and Federal offices here in South Florida.

I live in … Miami, Florida I grew up in Lawrenceville, Georgia.

I got into politics because … I have always felt it is our responsibility as American citizens to help give a voice to the voiceless and to fight for those who cannot fight for themselves. My parents immigrated to the U.S. from Bangladesh before I was born to give my family a better, safer, healthier life than the lives they had. Despite every challenge they had to overcome, they never forgot where they came from and always helped those who were less fortunate. It is important to me that minority communities have representation in the political process.

One principle I always put above politics is … family comes first. Working in politics can be all-consuming and overwhelming, but I work hard to find a work/life balance that allows me to stay close to the people I love most.

Person or people who gave me my first shot … Cabral Franklin hired me to be the Campaign coordinator for a first-time, underdog candidate running for the Atlanta City Council. Cabral’s political brilliance, hard work, and determination led our candidate to win against an entrenched 12-year incumbent.

When I begin a project or first work on a campaign, I look for … I look for the “why.” Why is this person running for office? Why should citizens put their trust in this person?

I’ve been blessed to have these people as my mentors … Cabral and Candice Franklin; we lost Cabral last year to cancer. Cabral was a mentor and a friend. Alicia Pardo and Jon Adrabi at Hillary for America have both helped me further develop my skills as a fundraiser; I am grateful to have the opportunity to learn from both of them.

The people I most admire in politics are … Secretary Clinton, she is a fighter and has been her entire life. I look up to her for inspiration.

One lesson I’ve already learned is … There are two types of people in this world: show horses and work horses. Be a workhorse and surround yourself with the same.

In 10 years, you’ll read about me … I will have figured out how to be an actress and run my own finance consulting firm helping Democratic candidates all in the Southeast get elected to local office.

I live in … Miami, Florida, but grew up in Hilliard, Ohio.

I got into politics because … I grew up in Ohio and vividly remember three things from my childhood that eventually steered me into politics. Our huge Earth Day celebrations at my elementary school, the 2004 unconstitutional ban on gay marriage and my family’s political discussions at dinner. These three things stuck with me and piqued my interest in the political process, protecting the environment and advocating for LGBT rights.

One principle I always put above politics is … my family, they have always been supportive of me, and I would not be who I am without them.

Person or people who gave me my first shot … Nick Janovsky and Marley Wilkes, who got me involved with the Alex Sink for Congress campaign. I started interning on the campaign and was lucky enough to be hired.

I’ve already worked for/on (campaign, issues, etc.) … in college I interned at the Department of the Interior with the Office of Surface Mining, I then interned with City of Tampa Councilman Mike Suarez. After college, I worked for Alex Sink for Congress, Charlie Crist for Governor and now I proudly work for Hillary for America.

When I begin a project or first work on a campaign, I look for … a strong candidate I believe in and a cause I am willing to fight for.

I’ve been blessed to have these people as my mentors … I have been lucky enough to have Marley Wilkes, Greg Goddard, Jessica Clark, and Jon Adrabi as my mentors.

The people I most admire in politics are … Secretary Clinton, she is the most impressive and inspiring politician. I am so proud to be a part of her team and cannot wait to see her as 45!

One lesson I’ve already learned is … hard work pays off.

If I wasn’t working in politics, I’d be … working in real estate. As a child I watched a lot of HGTV with my mom and always loved the idea of buying, selling and designing homes.

In 10 years, you’ll read about me … I will be working to protect the environment and advocate for LGBT rights!