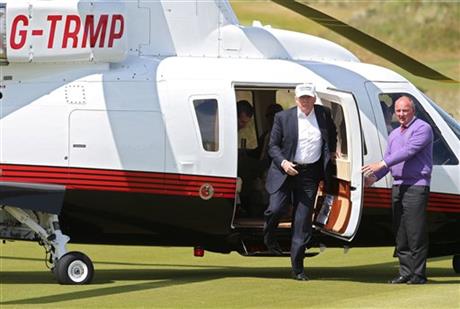 Donald Trump moved from hole to hole on his wind-swept Scotland golf course Saturday, not a club in hand but promotion on his mind, extolling North Sea views that are among “the great sights of the world.”

He squeezed in commentary about the United Kingdom’s vote to leave the European Union and Hillary Clinton‘s tax policies. And when the abbreviated tour of Trump International Golf Links ended at the clubhouse, Trump ditched the pack of reporters trampling on his fairways, hopped into the driver’s seat of a golf cart and gave media mogul Rupert Murdoch and wife Jerry Hall a ride around the property.

Business, with a wedge of politics, was par for the day.

A Trump scorecard by hole:

—On the 10th fairway, he said Texas wouldn’t take a cue from the U.K. and try to secede. “Texas will never do that because Texas loves me.”

—On the 13th green, he said fixing the United States would be like repairing a golf course. “It’s not so different, it’s just bigger.”

—On the 14th green, he boasted about overcoming some local opposition to building the course. “I am good at getting things zoned.”

—On the 18th tee, he warned scrambling reporters: “Don’t fall! I don’t want to be sued.”

Trump’s appearance at the course outside Aberdeen was the final event of his two-day tour of his golf resorts in Scotland. While the timing of the trip was not linked to Thursday’s referendum, the U.K.’s surprising vote dominated the questioning of the presumptive Republican nominee for U.S. president.

Trump has cheered the outcome and tried to play down American fears about it. The U.S. stock market and global markets plunged Friday after the “leave” side won.

“Americans are very much different. This shouldn’t even affect them. I mean frankly, if it’s done properly, if we had proper leadership,” Trump said moments after emerging from his helicopter on the 10th fairway.

When pressed about the stock market drop that has caused Americans to fret about retirement plans and savings, Trump suggested that Wall Street was actually worried about President Barack Obama‘s economic policies and the U.S. debt.

Trump has linked the nationalist fervor behind the “leave” vote to the forces driving his own campaign. He shrugged off the criticism he received for saying that if the value of the British pound falls, more people would spend money at his courses.

Trump also muddied the waters about his call for a temporary ban on foreign Muslims from entering the United States. Trump, in a speech this month, added a new element, saying he favors suspending immigration from parts of the world where there is proven history of terrorism against the U.S. and its allies.

On Saturday, he said it “wouldn’t bother me” if a Muslim from Scotland tried to enter the U.S. Then, he suggested to reporters that “strong vetting,” and not a ban, would be an essential part of his immigration policy.

Spokeswoman Hope Hicks later clarified that Trump’s position has not changed since the speech.

The scene outside Aberdeen, a day after Trump reopened a course on Scotland’s opposite coast, again highlighted the unprecedented co-mingling between the candidate’s business and campaign, as well as his ability to create a made-for-TV spectacle.

Aides originally said Trump would not talk to reporters. Then they said he would only discuss the golf course.

Trump had other ideas. He ended up holding court at four separate holes. Reporters piled into golf carts and ran along fairways to keep up.

The roving news conferences doubled as an advertisement for the course, which despite its stark beauty, has failed to live up to Trump’s lofty promises. Trump has claimed to Scottish authorities that he lost money on the court, and it has yet to host a major tournament. He has fought local authorities over a proposed wind farm and the preservation of the dunes that line the course.

Though Trump boasted he won his zoning battles with the town, the owners of two houses that line the course remain unbowed. As a protest of Trump’s immigration proposals, which include building a wall along the U.S.-Mexican border, each flew a Mexican flag that could be easily spotted from the course’s clubhouse.