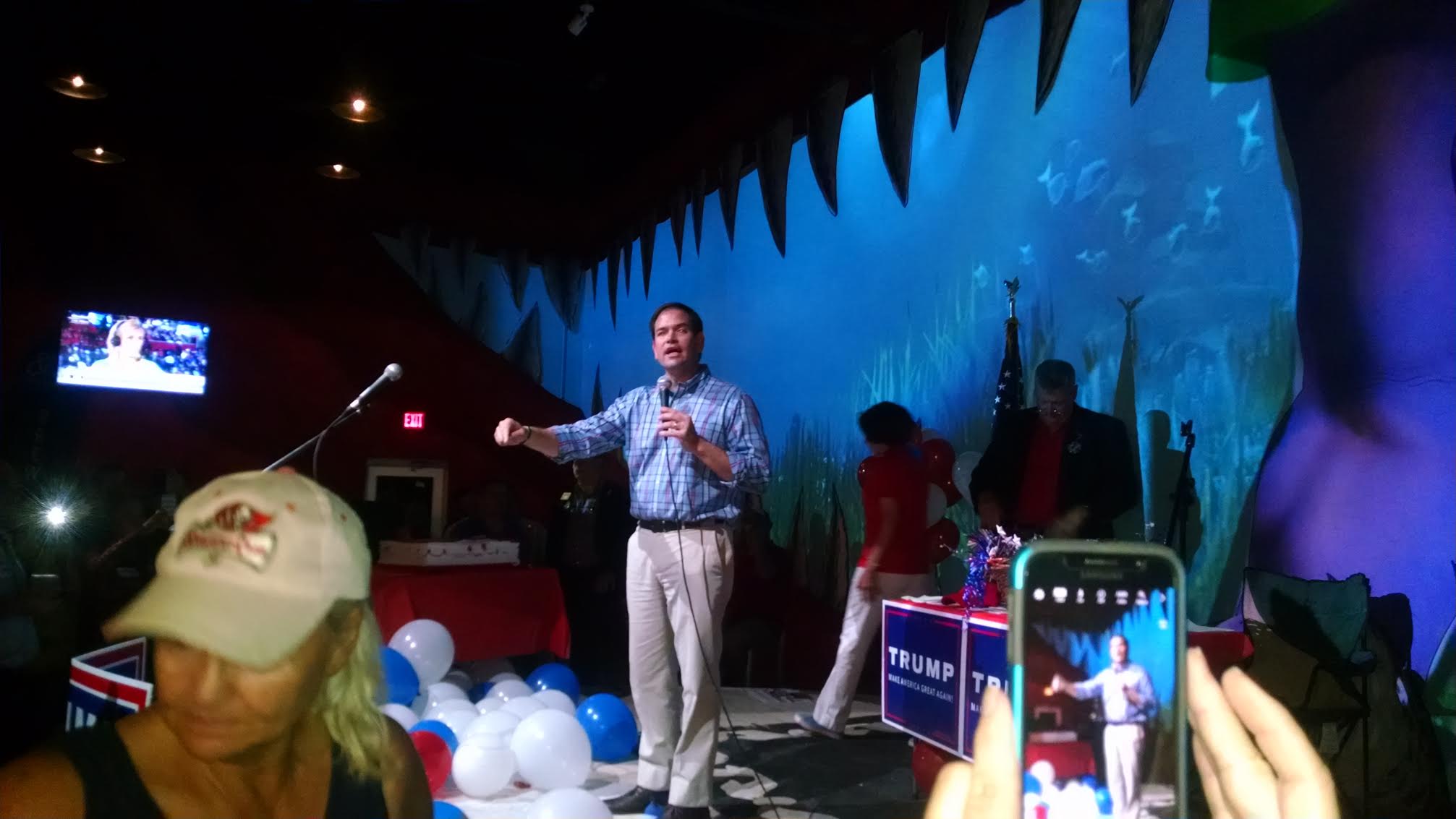 He actually began his Tampa experience Thursday night, where he made a pop-up appearance at 81 Bay Brewing Company, a cavernous craft brewery off of Gandy Boulevard in South Tampa that the Hillsborough County Republican Party had taken over for an RNC watch party.

A host of candidates running for office in Hillsborough County were invited to speak, though the acoustics were horrible, and some speakers — like Congressional District 14 aspirant Christine Quinn — challenged the audience to quiet down.

Shortly after 7:30 p.m., however, everything changed: that’s when Rubio entered the room. The Florida senator only walked a few feet inside the building before he was swarmed by well wishers, all of whom wanted to take selfies with him.

While Rubio was posing for photos, I asked him if he approved of what Ted Cruz had done the night before in Cleveland. The Texas senator engendered boos in the hall by not endorsing Trump in his speech, whereas Rubio had sent in a one-minute video giving his support to the GOP nominee.

“I wouldn’t have done that …” he said, before being cut off by another supporter. “We have two choices, Hillary Clinton and Donald Trump, and I’m never going to support anything she does.”

He added, “the best thing I can do for the Republican party is to keep the Senate in Republican hands. That’s why I’m staying in Florida; I’m trying to win.”

Although mocked by Democrats and some journalists for his flip-flopping decision to run for re-election after declaring throughout 2015 that he would not do so, Rubio seems to have not suffered that much back on the campaign trail. He has a huge lead over his only major GOP Senate opponent, Carlos Beruff, and has led in every poll against his two potential Democratic opponents this fall, Florida Congressmen Patrick Murphy and Alan Grayson.

After posing for photos for another 10 minutes or so, he took to the stage, where he gave a three-and-half-minute speech.

“The time for fighting against each other is over!” he shouted as the crowd — in part buzzed, perhaps by the beer — slowly began to quiet. “It’s time to come together and win in November, because if we don’t win in November, then someone who is unqualified and disqualified will become commander in chief.”

Observing the other candidates in the audience, like Dana Young running for the state SD 18 seat, and Jackie Toledo in HD 60, Rubio said the crowd had to make sure to get out and support the entire GOP ticket on the ballot this fall.

There was more posing for selfies. He then engaged the press, taking a question in English and one in Spanish. Before he bolted, I asked him what he thought about Trump’s controversial comments in the New York Times regarding the NATO alliance. Trump said if Russia attacked a NATO nation, he would decide whether to come to their aid only after reviewing if those nations have “fulfilled their obligations to us.”

“Well, I disagree with him on that,” he replied. “I obviously want to see our NATO allies contribute more, but that’s been a longstanding problem. But we can’t put the NATO alliance in doubt. I disagree with him on that. I hope he’ll change his mind. If he pursues that, as a senator I’ll oppose it. I don’t think that’s the right approach on that issue. But I think Hillary’s a disaster. I think she’s worse. I think Hillary Clinton has been a part of the most disastrous foreign policy presidency we’ve seen in a long time under Barack Obama.”

And with that he was off.

Rubio’s appearance in Tampa, a rare one in the entire five-and-a-half years since he was elected, was noted by both the Murphy and Beruff campaigns.

“Marco Rubio barely acknowledged Tampa during his six years in the Senate and when it came time to fight for Tampa families on skyrocketing flood insurance rates, he abandoned them almost entirely,” said Murphy campaign Spokeswoman Galia Slayen. “Tampa doesn’t need Marco Rubio showing up now to pander for votes. They need a senator who shows up when it matters and cares enough to fight for them every day.”

“Considering how rarely he’s been in the Tampa Bay region over the last six years, he probably had to allow extra time in case he got lost going to the airport,” said Beruff campaign spokesman Chris Hartline. “An election-year epiphany won’t distract voters from the fact that Marco Rubio has ignored most of the state and ignored his duties as senator for the last six years.”