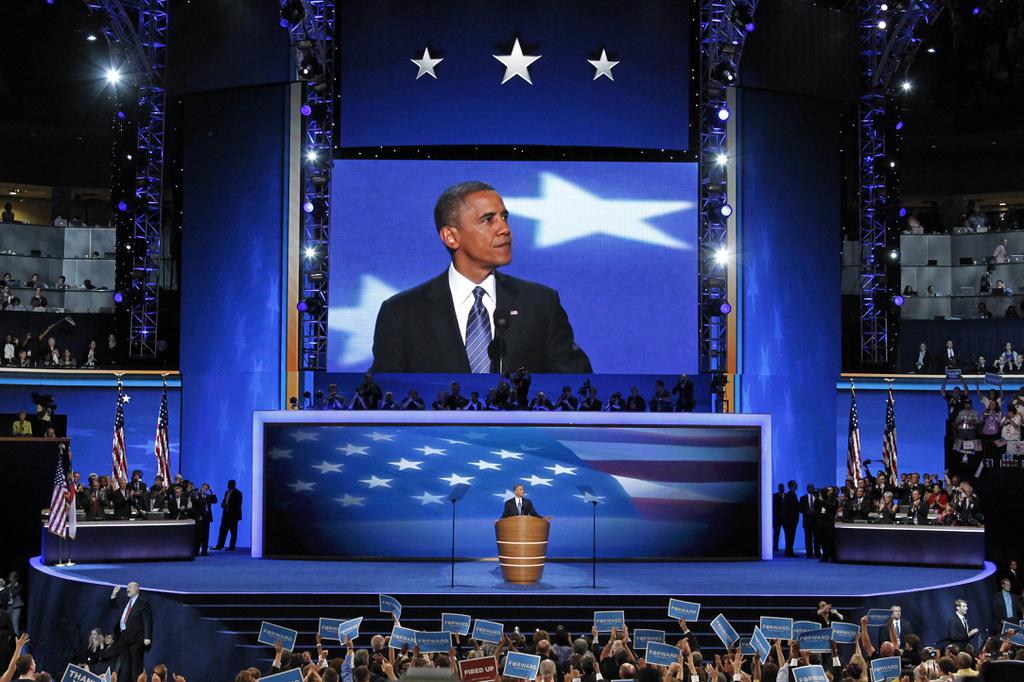 The Latest on the Democratic National Convention (all times EDT):

President Barack Obama was coming to the part of his convention speech where he’s critical of Donald Trump – and the mention of the GOP nominee’s name caused the crowd of delegates to boo.

He deviated from his prepared remarks to implore his fellow partisans: “Don’t boo. Vote!”

President Barack Obama is telling the Democratic convention and voters watching on TV that if they’re “concerned about who’s going to keep you and your family safe in a dangerous world,” then their Election Day choice is clear.

Obama says Democratic nominee Hillary Clinton is “respected around the world not just by leaders, but by the people they serve.”

He says Clinton has worked closely with “our intelligence teams, our diplomats, our military.”

He says Clinton won’t relent until the Islamic State group is destroyed.

And in a reference to GOP nominee Donald Trump, Obama says Clinton will “finish the job – and she’ll do it without resorting to torture, or banning entire religions from entering our country.”

President Barack Obama is blasting Donald Trump’s for trying to scare Americans into handing the GOP nominee the keys to the White House.

Obama tells the Democratic National Convention in Philadelphia that Trump believes he will win if he “scares enough people” over immigration and crime.

Obama says Trump is “selling the American people short” by suggesting “he alone can restore order” as a “self-declared savior.”

The second-term president notes that Democrats are meeting in the same city where American founders signed the Declaration of Independence in 1776 and later wrote the Constitution.

He’s quoting words from those documents, and saying it’s “We the people” who “can form a more perfect union.”

President Barack Obama is telling the Democratic National Convention that if they believe that there’s too much inequality in our country and too much money in our politics, they need to be as vocal, organized and persistent “as Bernie Sanders‘ supporters have been.”

He says they need to get out and vote for Democrats up and down the ticket and then hold them accountable.

Obama says politics can be frustrating, but that “democracy works.” He says Americans have to “want it, not just during an election year but all the days in between.”

President Barack Obama is trying to make the case for his preferred successor and he says: “Hillary Clinton is that woman in the arena.”

Obama says the Democratic nominee has been “there for us – even if we haven’t always noticed.”

The president tells the delegates at the Democratic convention in Philadelphia that if they’re serious about democracy, “you can’t afford to stay home just because she might not align with you on every issue.”

He tells activists: “You’ve got to get in the arena with her, because democracy isn’t a spectator sport.”

Obama’s also making a reference to GOP nominee Donald Trump. The president says, “America isn’t about, ‘Yes he will.’ It’s about, ‘Yes we can.'”

Obama says he knows plenty of businessmen and women who’ve achieved success like Trump has. But Obama says they’ve done it without leaving a trail of lawsuits, unpaid workers and “people feeling like they got cheated.”

He said anyone concerned about pocketbook issues and who wants a bigger voice for workers should vote for Democratic nominee Hillary Clinton.

President Barack Obama is criticizing what he says is the “deeply pessimistic vision” of America he says he heard from Republicans at their convention last week.

Obama is telling the Democratic National Convention that Republican nominee Donald Trump and his supporters proposed “no serious solutions to pressing problems.”

Instead, the president says Republicans spent their time fanning “resentment, and blame, and anger, and hate.”

Obama says “that’s not the America I know.”

He’s delivering a speech that makes the case for Democratic nominee Hillary Clinton’s election as his successor.

Obama says the country is “full of courage, and optimism, and ingenuity.”

The president is acknowledging that Americans have “real anxieties” and that some have not shared in the economy recovery.

President Barack Obama says there’s never been a man or a woman – “not me, not Bill” – who’s more qualified than Hillary Clinton to be president.

Obama says at the democratic convention that “nothing truly prepares you for the demands of the Oval Office.”

Obama says Clinton has been in that room and has been part of the decisions that a president makes.

He’s vouching for Clinton as someone who listens to people, keeps her cool and treats everybody with respect.