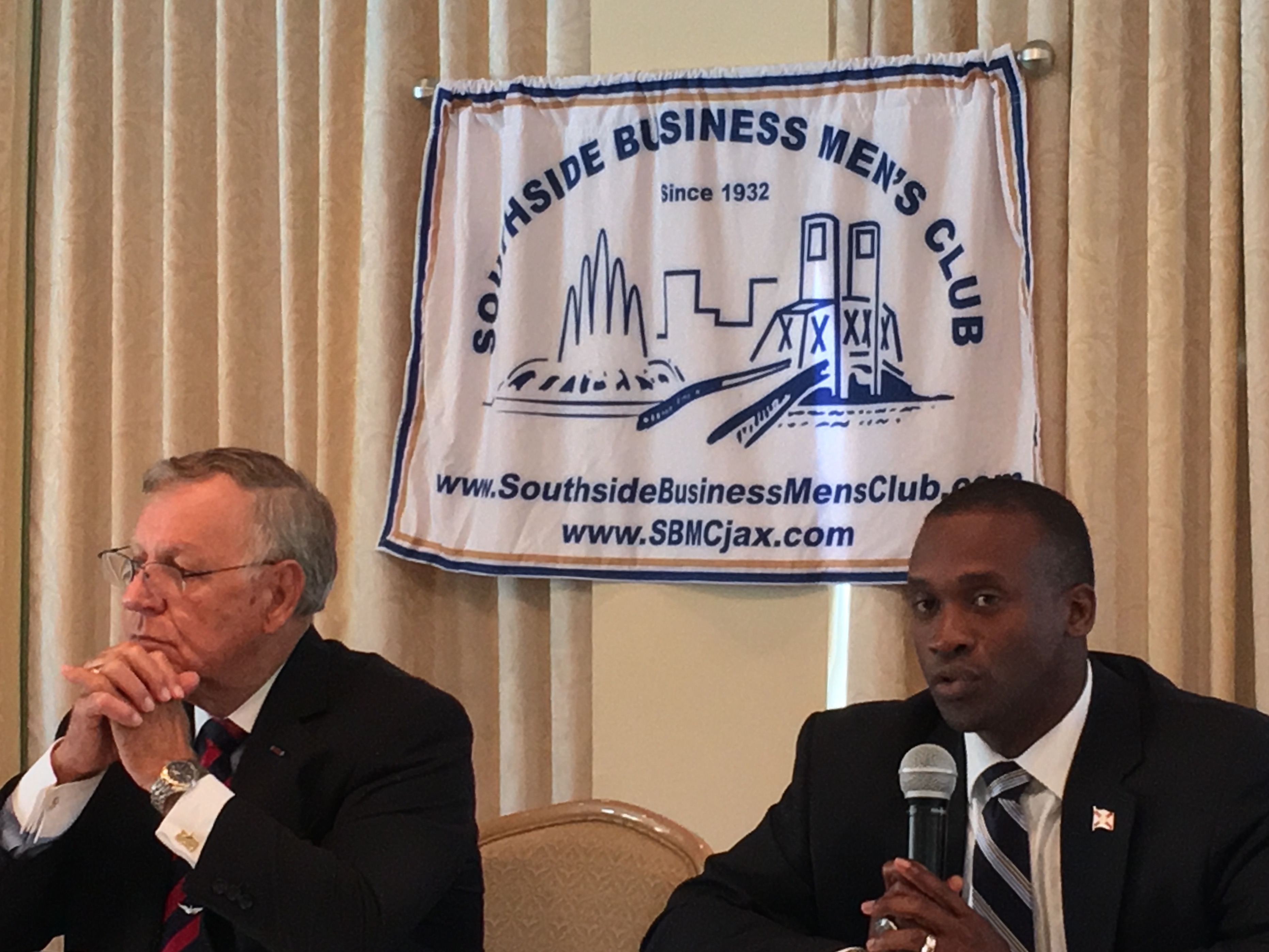 Everyone was there. Except the frontrunner.

Terrance Freeman, Stan Jordan, Mark MacLean, and Don Redman had 45 minutes to make their case at the regular meeting of the Southside Business Men’s Club.

The story going in: Clay Yarborough has crushed the field in fundraising, and reasonable expectations were he would be the target. Earlier this summer, a lackluster forum featured four of the five candidates, and Yarborough’s competition didn’t seize the opportunity to put him on the defensive.

Wednesday gave those running behind Yarborough the chance to distinguish themselves without him present, as Yarborough was home with the flu.

However, there was more harmony than differentiation, with the speakers generally agreeing guns are great, Obamacare is bad, taxes are too high, and sanctuary cities are bad for quality of life.

Jordan led off with the intros, noting that Ray succeeded him in office after he was termed out, and now he sought the same opportunity.

Freeman was next, describing himself as a “conservative Republican” and a “small business owner.”

“I am new to this political scene, and given the climate of things these days,” Freeman said, “I don’t think that’s a bad thing.”

MacLean, with familial ties to the Southside Business Men’s Club, talked of being a “ninth-generation North Floridian.”

“I took on a lot of tough issues on the city council. I was not known for backing down on issues,” Redman said, noting his work toward setting noise limits at “rock concerts downtown.”

“I’ve been a doorman for God’s house for 37 years,” Redman said.

And with those intros, 20 minutes of the program were consumed.

Ray did have questions. The first: after talking with citizens, what issues do you see as important?

Jordan got first crack. He noted that parents are concerned with education, seniors with safety and crime, and military people with veterans’ services.

“I am focusing on military issues,” Jordan said, noting that he was previously on the BRAC Committee, and that he wants that role again to protect against an inevitable “national tug-of-war.”

Educational funding also is a priority for Jordan.

Freeman, meanwhile, focused on jobs, and helping kids, especially those growing up lower-middle-class and below. MacLean, meanwhile, saw education, veterans issues, and jobs as districtwide priorities.

Redman was up next, and noted “everybody seems to be against Common Core.”

As well, the onerous tax burden on small businesses nettles Redman, on “everything from electricity to watching TV in a business.”

“I have fire extinguishers in my business … I get inspected by three different groups, the fire department, the department of professional regulation, and the health department.”

“I get inspected by three different groups. My fire extinguishers work,” Redman said.

Sanctuary cities were up next.

Freeman vowed to “fight to hold our federal officials accountable,” as “Florida is a family state,” and “as a family man,” he wants to make sure the state is safe for families.

“The state needs to take a stand,” Redman said, on counties that “defy the federal government and defy what is right” regarding “aliens and illegal people that commit crimes.”

Jordan described “sanctuary cities” as a “place where you can break the law and it still be legal.”

“America needs to wake up … and not provide safe havens for people who break the law,” Jordan said. “You don’t reward bad behavior. As a former principal, I can tell you that doesn’t work.”

The concept of a special session on gun control in the wake of the Pulse massacre was up next.

Is there any difference between these candidates on the 2nd Amendment? Short answer: no.

MacLean cautioned against “immediate legislation … that just make people feel better,” especially given that a special session is “very expensive.”

“I think it’s a task for the next Legislature,” MacLean said, adding “new gun laws” would not “solve the problem.”

Redman started off with “guns don’t kill people; people kill people,” and it went on from there.

“My heart breaks for those who lost loved ones at that event,” Freeman said, noting he is endorsed by the sheriff and the NRA and “a strong proponent of our 2nd amendment rights.”

“There’s evil in this world,” Freeman said, “and government needs to step up and handle these issues of people who are really challenging the quality of life.”

Medicaid expansion was up.

MacLean said the “siren song of accepting federal dollars is misguided” and “Obamacare’s collapsing from its own weight.”

Freeman described “Obamacare as an example of career politicians” and that sooner or later, the funding would be pulled from it.

Jordan observed that “Obamacare will self-destruct on its own,” based on actuarial projections.

“It’s either going to be gone, or it’s going to be re-legislated,” Jordan said, before saying America is an “entitlement society like we’ve never seen.”

“We need to help those who need help … but Obamacare won’t work, period,” Jordan said.