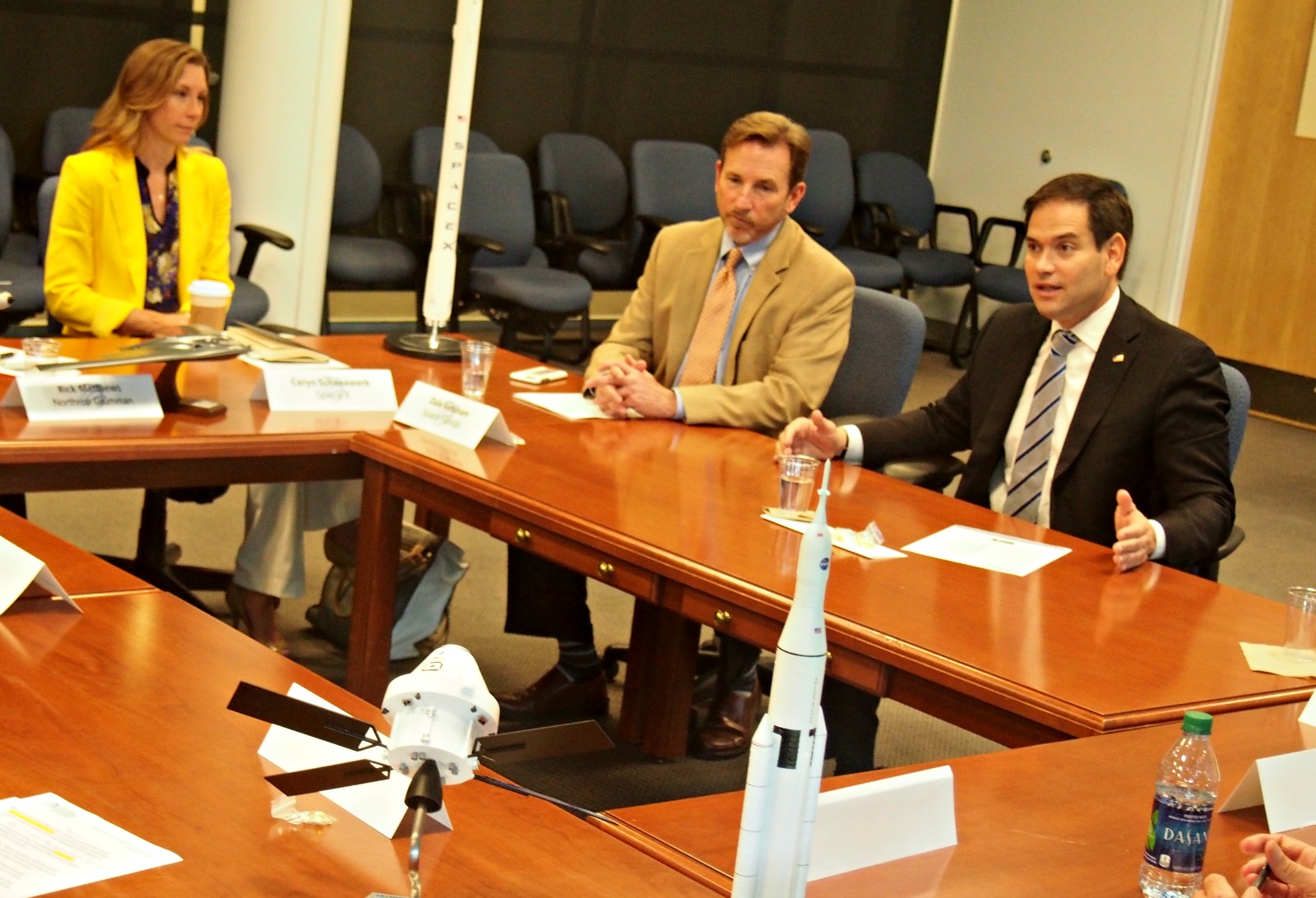 Rubio met Friday with space industry representatives and others in a roundtable discussion organized by the Economic Development Commission of Florida’s Space Coast and Space Florida, the state’s space industry development corporation.

They heard from him what they wanted: that Florida’s junior senator, seeking re-election, is behind NASA’s most ambitious programs, to turn over as much lower-Earth orbit activity as possible to private companies, and focus the nation’s manned space flight efforts on getting to Mars.

And Rubio said the best thing that can happen is if the presidential nominees, Democrat Clinton and Republican Trump, announce they share those goals too. Neither major party candidate has outlined any space policies, though both the Republican and Democratic national committees have released very general statements of support of where NASA has been heading lately under President Barack Obama.

“My hope is that both candidates quite frankly will come forward with clear visions of NASA and future space exploration so that we have a strong level of certainty moving forward,” Rubio said.

Rubio’s meeting with the EDC and Space Florida representatives was closed to the media and the public, but he and Space Florida lobbyist Dale Ketcham met afterward with media, outlining Rubio’s positions and the space industry’s reactions. Among the attendees were representatives from Boeing, Lockheed Martin, Northrup Grumman, SpaceX, United Launch Alliance and Craig Technologies.

Rubio’s likely Democratic opponent this fall, U.S. Rep. Patrick Murphy of Jupiter, met with a similar roundtable group earlier this year. Murphy also pledged broad support, though he offered some uncertainty and discomfort for some details of NASA’s agenda, particularly turning over manned-space-flight activity in lower Earth orbit entirely to the private sector.

Most urgently, Rubio called for long-term budgeting and administration vision that would provide long-term confidence for the space program.

“Not just keep what we have. Let’s not walk away from the progress we’ve already made,” Rubio said.

Rubio was critical of Obama for doing just that in his first term, before Rubio entered the Senate, when the president canceled the last big NASA deep space program, Constellation, at the same time the space shuttle program was ending.

The double whammy not only bled nearly 10,000 jobs from the Cape Canaveral area, but it also left uncertainty about what NASA would do next until the administration backed plans for the new, big, heavy-lift SLS rocket and a 20-year journey toward a manned Mars mission.

“For a lot of people there really was no, for a number of years, strategic guidance about why they were here to begin with,” Rubio said. “We’re concerned about that. Because this workforce is highly specialized. If we stop providing certainty in both contracting and direction, this workforce tends to bleed off into other industries or other parts of the country or even other parts of the world. And it takes years to reconstitute that.”

Ketcham said the EDC and Space Florida representatives took the opportunity to encourage Rubio’s support for the Cape Canaveral Space Port as the nation’s premier launching site, something Rubio agreed with. Ketcham noted that much of Florida has research and business dependent on the spaceport.

“The Cape Canaveral Space Port region is bigger than Brevard County,” he said.

nextJacksonville Bold for 8.19.16 — Why voters won’t say no to ‘Yes for Jacksonville’