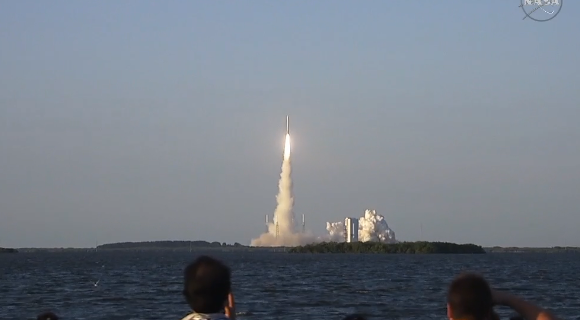 Against a clear blue sky illuminated by a setting sun, an Atlas V rocket streaked into space Thursday evening sending the OSIRIS REx spacecraft on a long trek to go grab some asteroid gravel and bring it back to Earth.

The launch countdown and 7:05 p.m. blast-off went flawlessly at Cape Canaveral Air Force Station, sending NASA on its way for one of its biggest science missions of the year.

If the seven-year mission succeeds like the launch, scientists might get evidence of the very origins of life in the solar system.

The intention is for the OSIRIS REx spacecraft to reach the asteroid Bennu, study it for a couple of years, reach down and grab some gravelly samples, then return to Earth. The big hope is that the samples contain organic molecules that on Earth are the origins of life. Such a grab could signal the potential universality of such molecules.

NASA and scientists have plenty of other objectives for OSIRIS REx, but its prospect of finding billions-years-old chemical evidence in one of the few places that might have it — nearly eternally wandering asteroids — opens all sorts of prospects of scientific study on the origins of life.

“We’re interested in materials from the earliest stages of solar system formation,” Dante Lauretta, principal investigator for the project and a professor at the University of Arizona, said at a recent media briefing.

As another scientist described it, the asteroid Bennu is a time capsule of the early days of the solar system. Since dust began clumping together to first form planets, the asteroid has been orbiting the sun, carrying that virgin rock, gravel and dirt with it for 4.5 billion years.

Bennu, which is about 1,600 feet in diameter, was picked because it’s big enough, it’s not rotating too quickly, and it’s pretty close to Earth. In fact, NASA rates it as a “near-Earth asteroid,” meaning there’s a possibility one day it might come too close and become an impact hazard. It also was picked because it seems to have the carbon-rich rock-chemical make up scientists are looking for. It’ll take about two years for the spacecraft to get there. Then OSIRIS REx will spend another two years carefully studying its entire surface, in part, looking for the best place to grab some samples.

When that’s found, the spacecraft will come within about 10 feet of the asteroid and a mechanical arm will reach out and touch it. A nitrogen canister will cause a puff, causing some of the loose regolith to stir up. The arm will then grab some of the floating regolith, most of which ideally will be about a half-inch in size. The arm will then “Pogo-stick” the spacecraft away from the surface, and OSIRIS REx will head home.

If all goes well, a pod with the sample — anywhere from two ounces to 4.5 pounds — will come back to Earth and be collected, much as scientists did with the Stardust mission, which returned with a much smaller sample of comet dust in 2006.

A quarter of the sample will be used for the origins-of-life chemical analysis. The rest will be set aside for other scientific study researchers can propose well into the future.

The Atlas V launch was the 65th consecutive successful launch of that rocket system by United Launch Alliance.